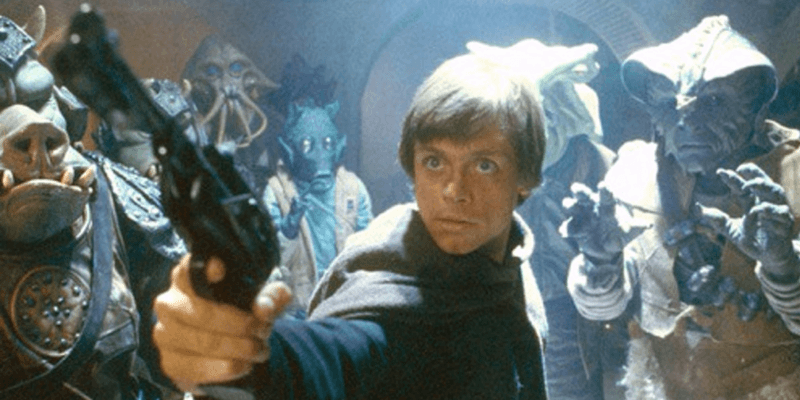 In a deleted scene from Star Wars: Episode VI – Return of the Jedi (1983) that’s been released on Disney+, Luke Skywalker‘s walk with the dark side could have ended in a dark tragedy and completely altered the course of the legendary Star Wars movie and subsequent Skywalker saga.

Before we ever met Rey (Daisy Ridley) in the Star Wars sequel trilogy or Anakin Skywalker (Hayden Christensen) in the prequel trilogy, many Star Wars fans’ hero was Jedi Knight Luke Skywalker (Mark Hamill). The simple Tatooine farm boy turned Rebel hero — and savior of the galaxy — became a beacon of hope not only in a galaxy far, far away, but one close to home too.

One of the film’s deleted scenes, “Vader’s Arrival and Reaching Out to Luke,” features Darth Vader reaching out to his son through the Force nearly one hour before their connection; the audience is made aware of their connection in the final cut of the George Lucas film.

This scene would have been part of the legendary sequence of Luke Skywalker in a cave on Tatooine, constructing his new green lightsaber and igniting the green blade. However, most fans don’t know what came before this — and that it may have altered Luke Skywalker’s fate completely.

The scene would have occurred immediately after Darth Vader’s intimidating arrival to the Death Star II when Vader scolds an Imperial Admiral over the lack of progress on their new super=weapon and the Emperor’s lack of forgiveness over the matter. Vader is then confined to his chamber, much like the one seen in The Empire Strikes Back, and the Sith Lord calls out to his son in an attempt to bring him to the dark side.

Related: You Can Still Buy Cara Dune Merchandise at shopDisney

“Luke, join me on the dark side of the Force. My son, it is the only way.”

The scene would have then cut to Luke Skywalker and R2-D2 concealed in a dark Tatooine cave while he puts the finishing touches on his new lightsaber. Hearing his father’s call, Luke brushes it off like it’s yesterday’s news and ignites his lightsaber.

The Jedi then taps the compartment in R2-D2 where the new saber will be hidden, Luke gives orders for his droids to infiltrate Jabba’s palace without him, and then the film picks up where the actual Return of the Jedi starts.

The sequence then would have continued with a wide shot of the Millennium Falcon and Luke Skywalker’s X-Wing fighter snuggled in a Tatooine valley while C-3PO and R2-D2 venture off to Jabba’s palace. C-3PO then reveals to the audience that Solo, Lando Calrissian (Billy Dee Williams), and Chewbacca (Peter Mayhew) are already in Jabba’s dwelling, spoiling the surprise of each character to the audience.

While this deleted scene is now a legend amongst Star Wars lore, it spoils a good portion of the first act. Since this scrapped scene would have originally opened the film, Darth Vader’s call to Luke so early in Return of the Jedi almost destroys the slow burn of Luke’s near demise. The Rebel hero’s all-black outfit signifies his potential turn to the dark side and adds to George Lucas’s attention to detail. Not until about an hour in do we see Luke Skywalker and Darth Vader finally confront one another — and only then is Luke ready to resist the dark side.

Furthermore, this scene may have suggested that Luke’s fall, much like his father’s, was not that far off, and the Jedi Knight was being tempted by the dark side far more than one realized.

However, if this scene were to have survived editing, we would have gotten a deeper, more personal look into Luke Skywalker’s inner struggle on choosing who to follow: his friends or his father.

As a Star Wars fan, I’m a massive sucker for deleted scenes that give the audience a closer look into our favorite characters (like Boba Fett!). This forgotten start of the movie only strengthens the fascination of how Luke’s journey, the Galactic Empire, and the entire original trilogy might have ended differently if we saw Darth Vader calling out to a young Luke Skywalker so early in the film.

Did you know about this scene? Let us know in the comments below!