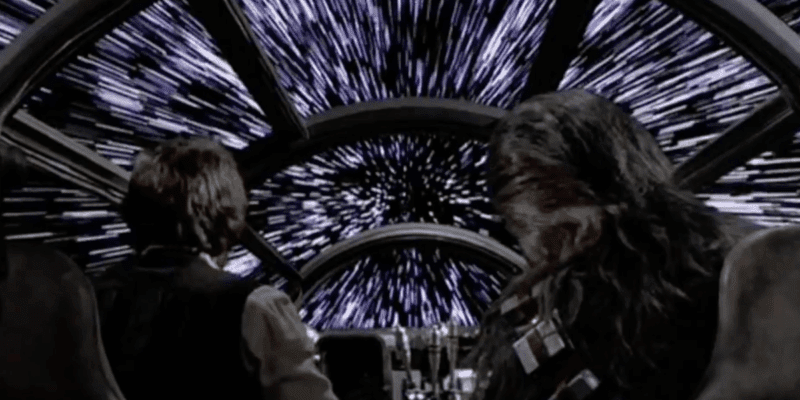 If there’s one thing Star Wars fans know about the “fastest hunk of junk in the galaxy,” it’s that the hyperdrive is always — always — broken.

If it wasn’t for Chewbacca’s mechanical skills and Han Solo’s absurd amount of luck, we’d never get anywhere at light speed in the Millennium Falcon (and, frankly, our favorite pilot and co-pilot probably wouldn’t have survived the original trilogy).

Now, one scientist is trying to make warp drive a reality. The Classical and Quantum Gravity Journal recently published a paper that American physicist Erik Lentz compiled while working at the University of Göttingen in Germany.

According to Yahoo!’s report about Lentz’s research:

…A huge hurdle remains, Lentz said, in finding a way to vastly reduce the immense amount of energy needed to power a theoretical ‘warp drive’ engine before any hope of building a prototype.

“A ‘warp drive’ technology is principally envisioned to speed up transportation in deep space,” Lentz said. “It can be used to enhance current ambitions for interplanetary and interstellar travel by drastically shortening travel times and widening mission windows.”

To put the actual speed of warp drive travel in perspective, Yahoo! shared that the nearest star beyond the Milky Way galaxy is Proxima Centauri. This particular star is 4.25 lightyears from Earth.

Using standard rocket fuel — like what NASA, SpaceX, and other space exploration programs typically use now — it would take 50,000 to 70,000 years to get to Proxima Centauri. Using advanced nuclear propulsion technology, it would still take 100 years to travel this distance.

It’s worth noting that Lentz believes this technology will be challenging to create, but certainly not impossible. He indicated that theoretical research and development could begin happening in the next few years and that a functional prototype could exist within as little as a decade.

Yahoo! shared this encouraging quote from the scientist:

“The first truly superluminal drives may come some decades thereafter,” Lentz said. “I would like to see this technology in use in my lifetime.”

There we have it — we could be blasting off to a galaxy far, far away sooner than expected. Time to start scouring the classifieds for a Corellian YT-2400 light freighter…

If you want to get just a taste of what real-life hyperdrive would feel like, Disney has you covered. The Millennium Falcon: Smugglers Run ride that can be found at Star Wars: Galaxy’s Edge at both Disneyland Resort’s Disneyland Park and Walt Disney World Resort’s Disney’s Hollywood Studios gives Guests a chance to pilot Han Solo’s famous starship for themselves.

The official description of the Star Wars attraction reads:

As for how hyperdrive functions in the Star Wars universe, Wookieepedia states:

The hyperdrive (occasionally called warp drive) was a vital starship engine system that allowed vessels to enter hyperspace to traverse the vast distances of space faster than lightspeed. The hyperdrive was thus a key technology in the foundation of galactic society, trade and war.

It is worth noting that, in reality, there are some technical differences between hyperdrive and warp drive, but the terms are often used interchangeably outside of scientific circles.

Will the Millennium Falcon show up in Star Wars again?

Even though the Skywalker Saga officially ended with Star Wars: Episode IX – The Rise of Skywalker (2019), we haven’t seen the last of some of the galaxy’s most iconic characters.

Jedi Luke Skywalker (Mark Hamill) and his X-wing, for example, just reappeared in The Mandalorian. While it’s doubtful that the Falcon will show up in the Mandalorian universe — unless the rumored Book of Boba Fett Han Solo cameo actually happens — there is another upcoming Disney+ series that would be a perfect fit for the famous ship.

The upcoming Lando miniseries was confirmed at the 2020 Disney Investor Day event. At this time, the Star Wars fan base hasn’t been made aware of exactly where this show will be set in the Star Wars story, but it’s likely to feature either Billy Dee Williams, Donald Glover, or both actors reprising the roles of Han’s frenemy, Lando Calrissian.

Given Lando’s long history with Han Solo’s Millennium Falcon, it seems unlikely that we’ll go an entire streaming show without seeing the ship.

What do you think? Will we see Millennium Falcon-like hyper-speed technology within our lifetimes?