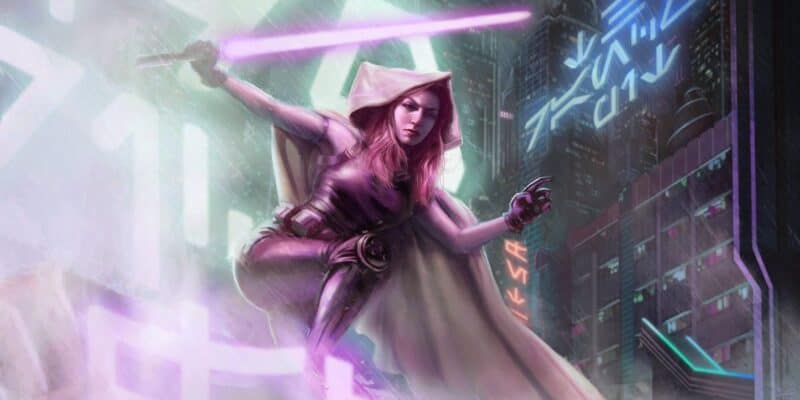 Star Wars: The Bad Batch creator Dave Filoni is continuing to connect the dots between his latest animated series and The Mandalorian. Filoni serves as the live-action series’s executive producer alongside showrunner Jon Favreau.

This, of course, set up the Star Wars Rebels villain’s live-action debut in The Mandalorian saga. Although the character was originally expected to appear in The Mandalorian Season 3 or spinoff series, Ahsoka, recent reports have indicated that Thrawn has actually already finished filming his first live-action show, which indicates he may show up in The Book of Boba Fett instead.

And, where there’s Thrawn — reportedly being played by Rebels voice actor Lars Mikkelsen in live-action — there is likely to be Mara Jade Skywalker. The duo worked closely together in Star Wars Legends materials, specifically Timothy Zahn’s Thrawn trilogy of novels, when Mara Jade was still an Emperor’s Hand assassin — long before she became Luke Skywalker’s wife and a Jedi Council member in her own right.

Rumors have long abounded that Marvel Cinematic Universe star Brie Larson is the frontrunner to play Mara Jade and, although this has not been confirmed by Disney or Lucasfilm, the timing adds up for a Book of Boba Fett debut.

Larson is currently filming The Marvels with Samuel L. Jackson and WandaVision star Teyonah Parris, but The Book of Boba Fett finished production before Captain Marvel 2 got underway.

This, of course, leads us to The Bad Batch.

How does this connect to Grand Admiral Thrawn and Mara Jade, you might ask? The location where the Galactic Empire takes Nala Se looks strikingly like a landmark that is very important to both characters in the Star Wars Expanded Universe — Mount Tantiss, which was originally introduced in Zahn’s aforementioned “Heir to the Empire” series.

As one article noted, the locale was extremely important to Emperor Palpatine/Sith Lord Darth Sidious:

Mount Tantiss is a secret location built into the side of a mountain. According to Mara Jade, Tantiss is where, “[Palpatine] kept all of his private mementos and souvenirs and odd bits of technology he thought might be useful someday.”…

…Mount Tantiss didn’t just house relics and trinkets for the Emperor, it also contained an secret cloning facility! As we see in the finale, the planet Nala Se is taken to bears some striking similarities to Wayland/Mount Tantiss. I mean, it’s literally a mountain with a facility built into it and clearly a place where cloning action is going down.

Although we don’t know anything for sure, it almost seems like a foregone conclusion that Filoni is foreshadowing what we can expect when The Mandalorian universe picks back up in December 2021 with The Book of Boba Fett.

It’s also possible that Thrawn could be behind even more than we know right now, possibly even pulling the strings behind Moff Gideon (Giancarlo Esposito) and his Dark Trooper squad’s hunt for Grogu — who we already know plays a huge role in Dr. Pershing (Omid Abtahi) and Gideon’s cloning experiments.

We do not yet know how bounty hunter Din Djarin (Pedro Pascal) or iconic Jedi Luke Skywalker (CGI Mark Hamill) will play into the likely introduction of both Thrawn and Mara Jade, but if Favreau and Filoni’s past entries into the Star Wars franchise are anything to go on, we’re in for a heck of a ride.

What do you think? Are we about to see Mara Jade and Mount Tantiss become part of the existing Star Wars canon?