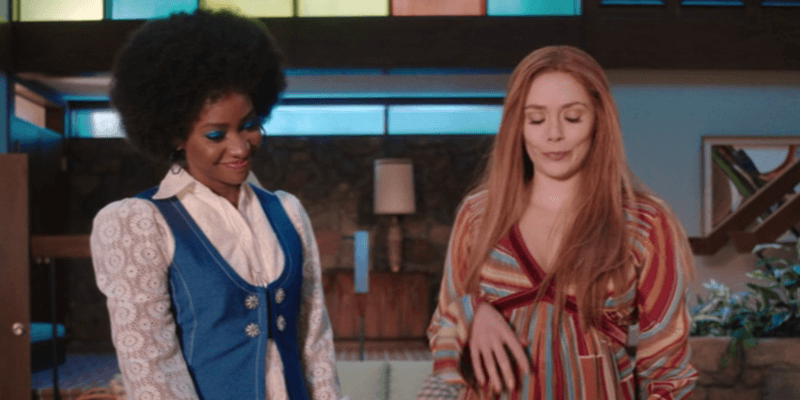 While WandaVision was a success, it didn’t come without its conflicts from fans who were clamoring for a blockbuster-worthy style cameo. First, there was that “Aerospace Engineer” comment and then Vision actor, Paul Bettany, added fuel to the fire when he hinted someone new would be starring in the finale. It would be the former, though, that Monica Rambeau actress, Teyonah Parris, said she faced the biggest backlash from fans.

Almost five months since its debut, people are still talking about WandaVision. And if the WandaVision series’ recent wins at the MTV Movie Awards are anything to go by, it’s set to be a good season for the Marvel show. The Marvel Cinematic Universe’s first foray into television sparked a global fandom, with audiences urging for a second season.

That’s unlikely — due to WandaVision‘s limited series submission for TV awards — but if you’re a Marvel fan who can’t say goodbye to the characters of Westview, then some of the cast will reprise their roles in upcoming MCU projects. Elizabeth Olsen will star as the Avenger in the Doctor Strange sequel, Doctor Strange in the Multiverse of Madness (2022), alongside Benedict Cumberbatch (Stephen Strange) and a rumored Tom Hiddleston (Loki).

Many know of Marvel’s intensely secretive production style which sees reveals and cameos become supercharged with every new entry into Kevin Feige’s Marvel Cinematic Universe. WandaVision was no different, and actress Parris has recently commented on the scrutiny she faced from mentioning the now-infamous “Aerospace Engineer”.

During WandaVision Episode 5, “On A Very Special Episode”, Parris’s character, Monica Rambeau, texts an Aerospace Engineer in order to help her and her team infiltrate Wanda’s Hex — the chaos magic she placed over the town of Westview. As soon as word of this new character hit the air, MCU fans ignited the internet with theories over who the engineer could be — namely, Reed Richards, leader of Marvel’s First Family, the Fantastic Four. And who did they have tapped to star as the hero, none other than beloved actor, John Krasinski.

This theory wasn’t completely obscure, either. The Walt Disney Company, which owns Marvel Studios, bought 20th Century Fox — now 20th Century Studios — in 2019. The studio held the rights to characters from the Fantastic Four and X-Men franchises. Now, we know that the Fantastic Four are coming to Phase 4 of the MCU after Marvel shared a detailed look at their upcoming projects, but back in February Reed Richards’ arrival into the Marvel Universe was nothing more than a theory, based on his role in the Marvel Comics.

Speaking to Variety, Parris revealed her view of the show changed when she watched it alongside the Marvel fandom.

“What I didn’t expect was, once I started watching as a fan and as an audience member with the real Marvel fandom, they were showing me things that I didn’t know [were] there and that meant something […] I’m off to the side like, ‘Hey, is that what we meant? Does this mean something?'”

Parris also commented on the scrutiny she has faced because of starring in one of Marvel’s newest projects.

“I’ll be honest, the whole tech person that I was going to see, the way people were fired up, I actually was like, ‘Who am I meeting? Did I forget? Did I not fully understand?’ […] They were so adamant, and then just being new to the universe, not realizing that everything single thing you say will be scrutinized.”

The “Aerospace Engineer”, as it turned out, was a new original character called Major Goodner (Rachel Thompson) who delivers a new S.W.O.R.D space rover for Monica Rambeau’s mission through the Hex. It’s easy to see, looking back, how the cast’s view on the show changes once it is put in front of an audience. The intricately detailed MCU will always draw a heightened focus from fans who are trying to figure out where the story goes next.

What’s next for Monica Rambeau?

Monica Rambeau — daughter of Maria Rambeau (Lashana Lynch) — will next appear alongside Brie Larson (Carol Danvers / Captain Marvel) and Iman Vellani (Kamala Khan / Ms. Marvel) in the Captain Marvel sequel, which has just been confirmed as The Marvels (2022). Produced by Kevin Feige, the new MCU film will be directed by Candyman‘s (2021), Nia DaCosta.

Did you think Reed Richards was going to show up in WandaVision?

Comments Off on ‘WandaVision’ Star, Teyonah Parris, Reacts to Backlash From Marvel Fans