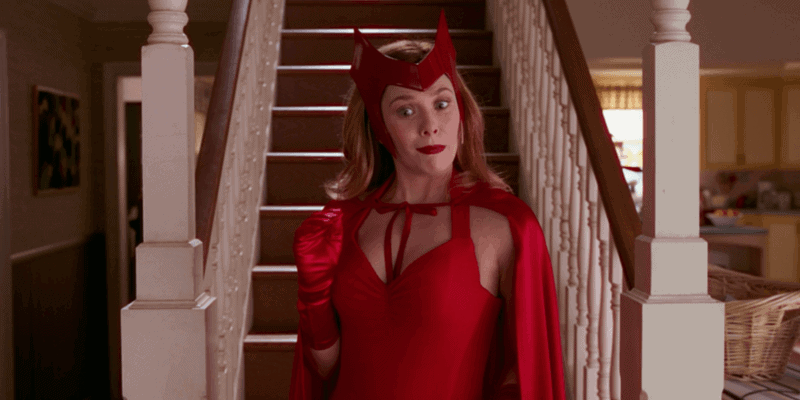 WandaVision became a surprising hit when it debuted in January. While Elizabeth Olsen’s and Paul Bettany’s characters had supporting roles throughout the Marvel Cinematic Universe’s slate of feature films, neither netted a solo movie. Even so, the WandaVision duo built a solid fanbase during their Marvel tenure, especially in their emotional appearances in Avengers: Infinity War (2018) and Avengers: Endgame (2019).

Now, with their breakout spin-off show, Olsen and Bettany are reaching new heights in the Marvel fandom, and the Scarlet Witch herself seemed to cast a spell over the internet last night.

Despite its creative ingenuity, WandaVision is perhaps one of the riskiest projects Marvel has ever done. Not only did the Disney+ Original launch Marvel’s Phase 4 — after Black Widow (2021) was repeatedly pushed back — but it starred two of Marvel’s lesser-known heroes — Wanda Maximoff/Scarlet Witch (Olsen) and Vision (Bettany). It also featured an imaginative story set up, unlike anything Marvel has done before, dealing with grief in a way not often seen in the media.

The show surprised fans when its sitcom meets suburbia approach seemingly challenged the superhero genre — or at least contrasting Marvel’s past outings — and delivered what felt like a detailed Marvel movie stretched over nine episodes with both sitcom and classic television elements.

Marvel has recently expanded on their creativity when making their MCU television projects, revealing that they don’t use showrunners but opt to follow a movie-making approach — this was also evident in the WandaVision TV follow-up, The Falcon and the Winter Soldier, which reunited fan-favorite heroes Sam Wilson / Falcon (Anthony Mackie) and Bucky Barnes / Winter Soldier (Sebastian Stan) in a globe-spanning adventure.

Many of Marvel’s cast won big awards last night. Scarlett Johansson took home the coveted Generation Award and Anthony Mackie won “Best Hero” for his turn as the Falcon and Captain America in The Falcon and the Winter Soldier. The latter also won alongside his co-star Sebastian Stan for “Best Duo”.

But it was WandaVision that would go on to sweep the ceremony. Not only did WandaVision win “Best Show” over other popular television shows like Netflix’s Cobra Kai and Bridgerton, but Kathryn Hahn took “Best Villain”, Hahn and Olsen snagged “Best Fight” for their epic battle in the skies of Westview, and Olsen picked up the “Best Performance in a Show” award.

The night brought many iconic moments and, as always, Marvel fans are losing it.

“Marvel fans, you are just the greatest fans to have.”

"Marvel fans, you are just the greatest fans to have."

Lizzie absolutely deserves that award. She did a PHENOMENAL job in WandaVision. #MTVAwards

Lizzie absolutely deserves that award. She did a PHENOMENAL job in WandaVision. #MTVAwards pic.twitter.com/QHxw2RsBBH

A Tweet from Ren shared their love for the WandaVision stars:

WHAT A NIGHT IT HAS BEEN FOR ALL THE LIZZIE WANDA KATHRYN AGATHA AND WANDAVISION STANS pic.twitter.com/hIzaZ5BVQC

During their speech for “Best Fight” — which also featured a hilarious play fighting sequence — Olsen and Hahn jokingly shared that they should have won “Best Kiss” instead. Another Tweet from a user going by bucky brainrot suggested they couldn’t contain their excitement:

lizzie: so we should have won… best kiss??

lizzie: so we should have won… best kiss??

elizabeth olsen felt so loved tonight at the mtv awards and that’s all that matters. fans CHOSE her to be the winner. nothing can take that away from her and her fans.

elizabeth olsen felt so loved tonight at the mtv awards and that’s all that matters. fans CHOSE her to be the winner. nothing can take that away from her and her fans. pic.twitter.com/FwHNhCF6X1

Even Anthony Mackie can’t help but express his love for Olsen. When accepting his award he gave the Martha Marcy May Marlene (2011) actress a well-deserved shout-out. Twitter user, Isa, shared the heartfelt moment:

anthony mackie is such a supportive cast member, literally a gem he gave a should [sic: shout] out to lizzie as he accepted an award #MTVAwards

anthony mackie is such a supportive cast member, literally a gem he gave a should out to lizzie as he accepted an award ?? #MTVAwards pic.twitter.com/9MlA8W0ufq

The love for WandaVision at the MTV Movie Awards is a good hint at how well the Marvel show might do at television’s premier award night, the Emmys. The fake-reality Original is likely to get multiple nods for its cast and production, potentially setting creator Jak Schaeffer and director Matt Shakman up for success alongside Olsen, Bettany and Hahn. It’s extremely clear not just from WandaVision‘s awards success but from the continued love from fans, that Kevin Feige’s first outing on the small screen was an unabashed success (even if some did want a Doctor Strange (Benedict Cumberbatch) cameo).

What’s coming up in Phase 4?

Now that Malcolm Spellman’s The Falcon and the Winter Soldier has wrapped up and brought a new Captain America into the MCU, Kevin Feige’s Marvel Studios has a pretty crowded upcoming slate. Loki is set to debut next month with Tom Hiddleston bringing the Asgardian God of Mischief back into the MCU. Black Widow is coming in July, and the back end of the year sees Oscar-winner Chloé Zhao’s Eternals (2021) and Shang-Chi and the Legend of the Ten Rings (2021) release, before Tom Holland’s Spider-Man: No Way Home (2021) closes out the year in December.

Are you happy that Elizabeth Olsen won at the MTV Movie Awards?