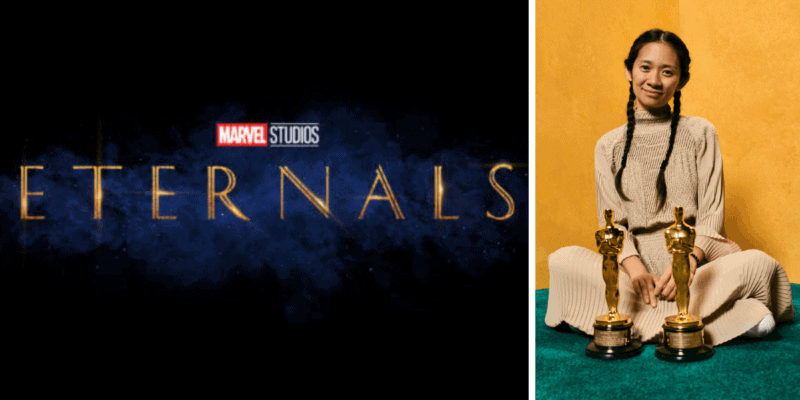 The rest of Marvel’s Phase 4 lineup is action-packed, as the films and series in this Phase of the MCU finally draw closer to a release date after numerous COVID-19 setbacks and delays.

Last night, Chloe Zhao took home the Oscar for Best Director for her work on Searchlight’s Nomadland — Zhao is also the director for Marvel’s upcoming film The Eternals. If fans were not already excited for The Eternals, Zhao’s impressive achievement should have fans on the edge of their seats in anticipation of this new Marvel film!

Chloe Zhao’s achievement at the 93rd Annual Acadamy Awards was monumental. In the nearly hundred years that the awards have been given, she is one of only two women to ever receive Best Director. The other was Kathryn Bigelow for The Hurt Locker (2008).

She did it! Oscar winner Chloé Zhao stopped by the V.F. #Oscars portrait studio after her history-making wins for Best Directing and Best Picture.

She did it! Oscar winner Chloé Zhao stopped by the V.F. #Oscars portrait studio after her history-making wins for Best Directing and Best Picture.

This brings us to The Eternals. We have previously reported on an interview The Hollywood Reporter did with Marvel President Kevin Feige and Zhao in which Feige explained why he chose Zhao to lead this project, “Her initial pitch to us was fascinating, and frankly one of the reasons we moved forward on the movie was because of the vision that she brought to it.”

We cannot wait to see Chloe Zhao’s vision for The Eternals come to life, especially after seeing her work and style on Nomadland — Zhao clearly has a lot to bring to the Marvel Cinematic Universe.

We know that The Eternals has completed filming, and the current release date is set as November 5, 2021. However, we have seen plenty of Marvel release dates shift. Take Black Widow, for example, so we will just have to keep our fingers crossed that we will The Eternals sooner rather than later.

Zhao has a great cast of characters and plenty of high-profile actors in The Eternals to work with in order to make her vision a reality.

Here is how Marvel describes The Eternals,

Hearing that Zhao is making this film as a fan just shows how much care and consideration will be put into this upcoming entry into the MCU.

Are you excited to watch Chloe Zhao’s The Eternals? Let us know in the comments!