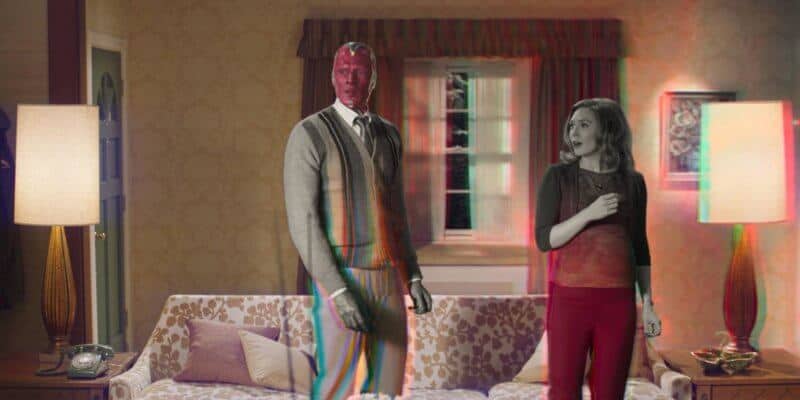 Rarely do shows — even scripts — follow the same linear path from conception to execution. There are many things that change along the way, whether it’s input from actors or writers or directors, and no one knows that better than the Marvel Cinematic Universe. But in WandaVision’s case, there was one particular moment that remained unchanged from development until it became alive on screen.

In an interview with EW, showrunner Jac Schaffer revealed that moment was the final scene between Wanda and Vision just before Wanda’s perfect sitcom reality evaporate and, the Scarlet Witch suddenly had to accept her grief, knowing that meant letting her technically dead android husband (or at least her construct of him) go.

“The day that we shot Wanda and Vision’s goodbye in the house. I think because the whole show hinged on that moment. You know we were blessed in the writer’s room that we knew where the endzone was. We knew were the show was going so it was never a question. Lots of things were in question. Lots of things shifted, but that was always…that’s what we were gunning for. And I had no doubt that it would be beautiful with Paul and Lizzie, and we talked about it so much and Matt came in with the framing, with the bay window, and the hex like kind of receding and coming toward them, and it was, it was so glorious and it was one of those things where like on the day you’re like ‘we got it.'”

Between Bettany and Olsen’s acting and the special effects, the moment that Schaffer describes ultimately ended up being one of the most moving scenes of the series. It’s always fun when something that’s envisioned in a story comes to fruition exactly the way it’s intended to, and thankfully, this particular scene stayed true to itself.

WandaVision ended up being not only one of the first installments of Phase 4, kicking off Marvel content after over a year of delays, but one that garnered the most acclaim and praise. Schaffer, for her part, is happy with where the show ended up and no matter what moments people enjoyed, she’s proud of what she put together.

“I stand by where the show goes, and I’m very proud of my team and so impressed and in awe of all of the collaborators on this enormous show,” she said. “And it’s my hope that the fan base feels the same excitement and emotional response that we all had in making it.”

What was your favorite scene in Wandavision? Sound off below!

Comments Off on ‘WandaVision’ Showrunner Says That One Scene Never Changed