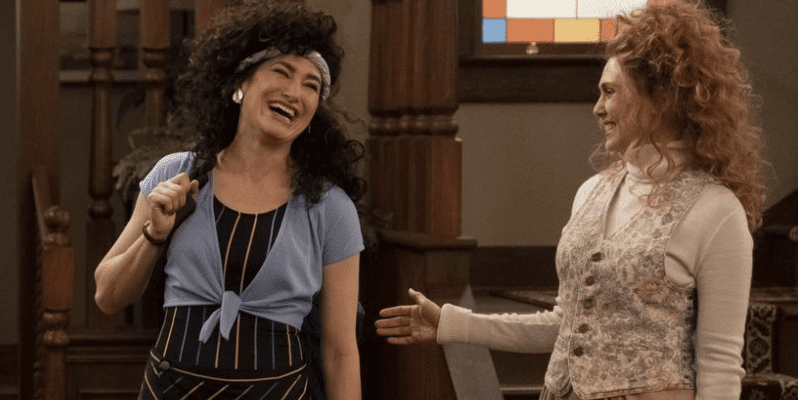 When WandaVision premiered on Disney+ on January 15, 2021, it changed the face of the Marvel Cinematic Universe. Fans were able to see Wanda Maximoff/Scarlet Witch (Elizabeth Olsen) and Vision (Paul Bettany) leading idealized suburban lives in a seemingly perfect world — but, not everything was as it seemed.

Related: Is There a Wild Connection Between Bucky Barnes and ‘WandaVision’?

In reality, this apparently perfect world was created by chaos magic born out of Wanda’s grief after Vision’s death in Avengers: Endgame (2019).  At the end of the series, Wanda learns she must let her family — the only thing that truly matters to her — go in order to save the citizens of Westview from her “Hex”.

Throughout the series, Wanda’s grief is palpable, particularly as Agatha Harkness (Kathryn Hahn) forces her to relive some of the most traumatic moments of her life, including her tragic childhood in Sokovia.

Now, Olsen herself has opened up to Glamour to discuss her MCU role and her life growing up as the sister of famous twins, Mary-Kate and Ashley Olsen. Per the fashion magazine’s article:

Elizabeth is notoriously private about her siblings, but she does recall one aspect of their fame that affected her at an early age. “I was 10 and I was curious about auditioning… and I realised very quickly it wasn’t for me because I was missing my sports teams, my dance class and all the extracurricular activities at school. But during that time, I thought ‘I don’t want to be associated with [Mary-Kate and Ashley]’, for some reason. I guess I understood what nepotism was like inherently as a 10-year-old. I don’t know if I knew the word, but there is some sort of association of not earning something that I think bothered me at a very young age. It had to do with my own insecurities, but I was 10. So I don’t know how much I processed, but I did think, ‘I’m going to be Elizabeth Chase [her middle name] when I become an actress.’”

Olsen, who will continue Wanda’s story alongside Benedict Cumberbatch (Dr. Stephen Strange) in the highly-anticipated MCU film Doctor Strange and the Multiverse of Madness (2022), also shared her funniest memory from the WandaVision set:

“One of my favourite moments is when we were filming the third episode, the ’70s episode. I’m very pregnant and I go through the entire pregnancy in 30 minutes. My waters were supposed to break and then water inside the house was supposed to pour down on Paul and I. We were told it was going to be hot water, and we could only do it one take… It was freezing cold!” she recalls laughing. “I don’t know what happened, but it was so funny. And I just felt like that the whole show – we had to work so quickly and get so much done in a day that all we could do is laugh our way through it.”

The Marvel star also shared another fun on-set story about WandaVision‘s breakout star, Kathryn Hahn. Hahn gifted the leading lady a fun reminder of their time playing Agnes and Wanda in the limited series that paid homage to classic television sitcoms. Olsen also shared that the two women bonded over their characters’ immense power within the MCU:

“Kathryn Hahn, was so delicious to work with!” Elizabeth recalls with glee. “She really was like, ‘We are witches. How amazing is that? Like, we are these powerful women who men are terrified by, and they had to murder us because they were so scared of our power and our temptation and everything that is so mysterious about being a woman. Women were weaponised, so to have this ownership of witches, again, is really fun!”

At the show’s wrap, Kathryn gave her a “witchy gift” box of crystals and magical stones. “It was this beautiful, weird little box of treasures.”

Marvel President Kevin Feige and his team have not yet confirmed when Kathryn Hahn’s character will show up again, but it seems likely that her reappearance in the MCU is inevitable.

The return of Paul Bettany’s Vision is also up-in-the-air at this time, but the touching final scene between Vision and Wanda indicates that they will someday be together again.

What do you think about these fun WandaVision stories? Are you looking forward to seeing Elizabeth Olsen’s Scarlet Witch as her story continues in the Marvel universe?