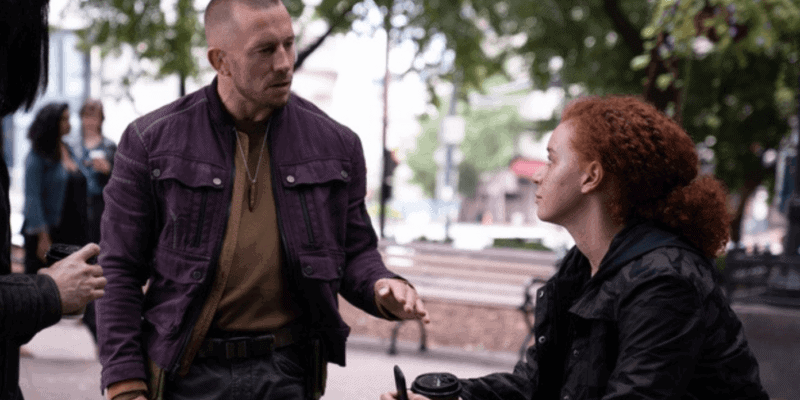 **SPOILERS for The Falcon and the Winter Soldier Episode 5 ahead**

There was a lot going on in The Falcon and the Winter Soldier Episode 5 (“Truth”). Viewers got a little bit of everything in this installment of Marvel’s latest hit series.

From that cameo, to Sam Wilson (Anthony Mackie) and Bucky Barnes (Sebastian Stan) bonding on Sam’s family’s boat in Louisiana, to Baron Zemo (Daniel Bruhl) getting his just due from the Dora Milaje in Sokovia, to Karli Mortenthau (Erin Kellyman) finally starting to show just how far gone she really is, to Wilson finally taking up Cap’s shield — Episode 5 was a wild ride.

Perhaps the most intriguing thing about the episode, though, had nothing to do with what was actually happening onscreen — it occurred in the subtitles!

Toward the end of “Truth”, Agents of S.H.I.E.L.D. character Sharon Carter (Emily VanCamp) — who we encountered last week in Madripoor — was seen making a phone call that ended with, “I promise you won’t regret saying yes”. As ComicBook pointed out:

Shortly after Carter offers the caller double whatever their last price was, the captions signify it’s “Batroc speaking in French.”

Fast forward a little bit and we see Batroc (Georges St-Pierre) meeting up with Karli Morgenthau (Erin Kellyman) and the rest of the Flag Smashers as they look to stop the Global Reparation Council from passing a new law detrimental to their cause. It’s here Batroc says he wants to kill Sam Wilson, apparently joining forces with the radical group.

The implication here, of course, is that the rumors of Carter pulling the strings as the Power Broker could be true, and her connection to Morgenthau the Flag Smashers might be very, very real.

Of course, this is Kevin Feige’s Marvel Cinematic Universe, so it’s also very possible that this phone conversation was meant to throw Marvel fans off the scent and the season finale — or, perhaps, series finale — next week will reveal that Baroc and Carter are working together to somehow help the Avengers in their quest to take down the Flash Smasher organization.

Right now, all we can do is wait patiently for Avenger Wilson to officially don his Captain America suit and see what happens next.

Remember, you can catch up on everything MCU — including the new series Marvel Legends — on Disney+ before the final episode of The Falcon and the Winter Soldier premieres next Friday, April 23. The official description of the series reads:

What do you think? Did the subtitles reveal a major plot point that proves Sharon Carter is working against the Avengers — or is she actually one of the “good guys”?