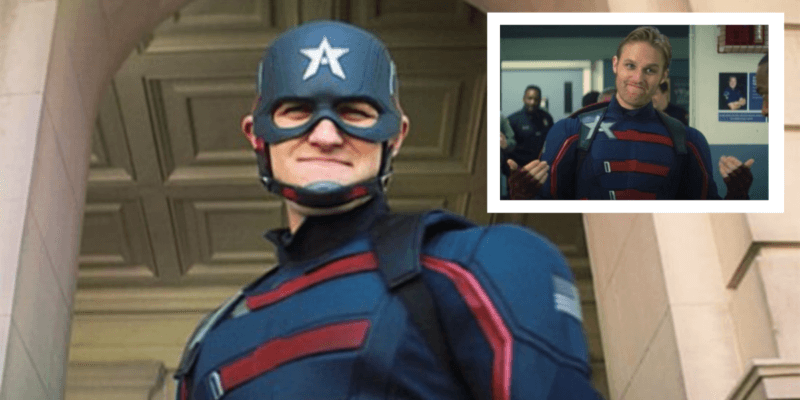 It’s safe to say that The Falcon and The Winter Soldier is the talk of the town. The second television outing from Kevin Feige’s Marvel Cinematic Universe is breaking streaming records and bringing back fan-favorite characters like Sharon Carter (Emily VanCamp) and Helmut Zemo (Daniel Brühl). The show is also hinting at some big reveals for the MCU’s Phase Four and beyond. Something else that the Disney+ is making clear to Marvel fans – John Walker (Wyatt Russell) AKA the New Captain America is here to stay, at least for now.

Russell has been at the forefront of the Captain America backlash and from the three episodes of The Falcon and The Winter Soldier that have aired, it’s evident he is no Steve Rogers (Chris Evans). As the show gets deeper into its six-episode run, more information is being revealed about John Walker’s role in the world following the tragic events of the Blip caused by Thanos (Josh Brolin) in Avengers: Infinity War (2018).

Russell, who is the son of actors Kurt Russell and Goldie Hawn, recently said he had never watched a Marvel movie or read anything from Captain America’s comic book appearances. Russell also, ironically, auditioned for the original role of Captain America ten years ago for the superhero’s origin film, Captain America: The First Avenger (2011).

With any pop-culture phenomenon these days, the internet has made their views on Russell very clear. One popular meme actually caught the attention of the Captain America actor, and, well, he has thoughts.

Which Meme Did He See?

There’s been a lot of memes about John Walker but the one in question crosses the Marvel character with The Walt Disney Company and Pixar’s Up (2009). Disney fans will remember the grumpy, elderly Carl Fredricksen who travels in his balloon-equipped house to Paradise Falls to live out the rest of his life. A few memes have surfaced comparing John Walker to Carl Fredricksen — calling upon one of Up’s release posters, Instagram artist, Valetino R., shared his version of a John Walker Marvel/Pixar crossover.

Did u like the 1st episode of #falconandwintersoldier ? I really enjoy all the action and character development!

In a recent interview with Variety, Russell said he had seen the memes in question. The Marvel actor said:

“I don’t have social media, but I’ve gotten some of the stuff sent to me from friends that were just too good not to see. The best one is the “Up” guy with the helmet on. It’s […] unbelievable. I mean, whoever did that deserves an award of some kind. It’s flattering. They just hate the guy. They just hate him! It was fun to be the Marvel punching bag for a little while.”

Not long ago, other John Walker memes surfaced on Twitter, depicting the new character as the all too familiar generic arrogant man stereotype, such as this one about Rogue One: A Star Wars Story (2016).

Rogue One is the best star wars movie!!

It’s quite clear that Marvel fans aren’t welcoming the new Captain America warmly. But, after original actor, Chris Evans’ mighty turn as the out-of-time super-soldier, it was always going to be difficult to reintroduce Captain America to our screens. It’s going to be even harder for Walker to adjust to his Captain America identity while being watched by Steve Rogers’ closest friends Sam Wilson/Falcon (Anthony Mackie) and Bucky Barnes/Winter Soldier (Sebastian Stan). While John Walker carries the shield, for now, it wasn’t long ago that an aged Steve Rogers – after finally spending his life with Peggy Carter (Hayley Atwell) – handed the Cap mantle over to his friend and fellow Avenger, Sam Wilson/Falcon.

With buzz surrounding Falcon’s potential – and highly probable – appearance as the world’s newest Captain America (we’ve already seen a glimpse of what he might look like), it’s a wonder how long John Walker might don the star-spangled costume. And how long Wyatt Russell can take being Marvel’s public enemy number one.

As The Falcon and The Winter Soldier reaches the midway point, there isn’t long before we all see the motives for each character more clearly in the show.

Do you think John Walker deserves to be the new Captain America?