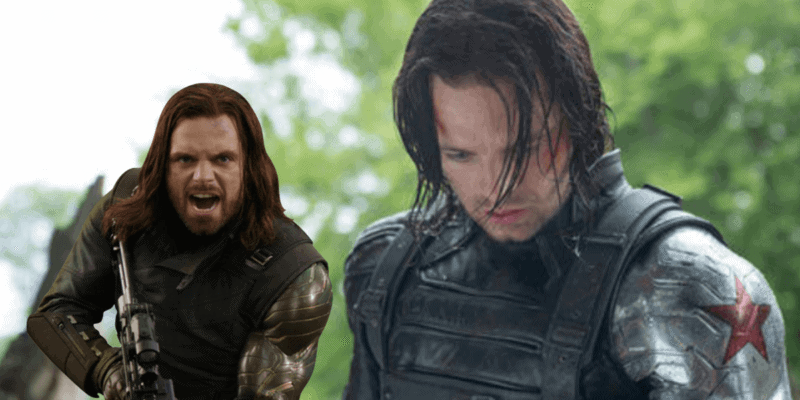 These may seem like a string of random words but for one major character in the Marvel Cinematic Universe it completely ruins their day. We first hear them in Captain America: The Winter Soldier (2014) where they are revealed to be the activation code words for turning a seemingly unassuming James Buchanan “Bucky” Barnes into the super strong assassin, the Winter Soldier, played by fan-favorite actor, Sebastian Stan.

We’ve recently seen Barnes — who wore a mask a long time before it was recommended — and the results of his violent past explored in The Falcon and The Winter Soldier. The Disney+ show which began a few weeks ago in the wake of WandaVision’s smash hit success, follows Anthony Mackie’s Sam Wilson/Falcon and Barnes as they hunt the mysterious Flag Smashers led by Karli Morgenthau (Erin Kellyman). However, before their adventures commenced, we saw an unsettled Barnes dealing with his horrific history in a series of therapy sessions with Dr. Christina Raynor (Amy Aquino).

The Falcon and The Winter Soldier follows Sam and Bucky as they deal with a world without Steve Rogers where a new Captain America has arrived in the form of John Walker (Wyatt Russell). The series comes from creator Malcolm Spellman (Empire) and stars Anthony Mackie and Sebastian Stan in the title roles, with supporting MCU characters like Sharon Carter (Emily VanCamp) returning, too. Kari Skogland is directing the series for Disney+.

And now, even with all of his onscreen therapy, where viewers can see just how much Barnes’s Winter Soldier past has affected him, some Marvel fans can’t help but try to turn Sebastian Stan into the assassin…in public.

In a recent BBC Radio interview, the Marvel actor has revealed that his most common fan encounter results in the activation words being spoken. Like you want the Winter Soldier to appear while you’re collecting your order from Starbucks? It’s a “No” from me.

Talking to BBC’s Radio 1 film critic, Ali Plumb, about his history as the flawed character, Stan revealed an interesting bit of information about how interactions with Marvel fans sometimes go. In response to whether he gets the Winter Soldier activation words recited back to him, Stan took a breath and shook his head before saying: “It happens quite often”.

“It happens at coffee shops. It happens a lot. And it’s always very funny. It’s an honorable thing I guess. You’re very taken with it all the time.”

Sebastian Stan is known for his often dry humor and unassuming outlook on life. He recently talked about the pressure of potentially playing Luke Skywalker in an upcoming Star Wars television project where he said, “You want to get that one right”, when speaking about taking on the iconic Jedi that Mark Hamill made universally famous.

Stan also talked about what he does when fans try to activate the Winter Soldier. He said:

“You do have to sometimes look at people in the face and say, ‘No, I will not become the Winter Soldier when you say that. You can keep saying it, and maybe you should say it, maybe that’s a moment we both need to have together, now, here. But nothing crazy will happen.'”

Although there is a lot of second-hand embarrassment that inevitably comes when actors share their weird fan encounters, Stan’s stories offer a hilarious look at what happens when you star in a blockbuster film franchise like the Marvel Cinematic Universe. Stan obviously loves his fans, though. Last Halloween, he shared a collection of Winter Soldier costumes to his millions of followers, saying “These #WinterSoldier costumes are blowing my mind!”

It would be extremely funny to see Sebastian Stan give in just once and perhaps show fans what happens when the activation code is spoken.

More on the Bucky Barnes/Winter Soldier

Originally brought into the MCU in Captain America: The First Avenger (2011) alongside Chris Evans as the titular character, Bucky Barnes was recruited by his brother-in-arms to help to take out HYDRA bases in the hope to capture the biochemist, Dr. Armin Zola (Toby Jones). In the skirmish, Barnes falls from a moving train and presumed dead. Of course, that was until he came back reincarnated as the brainwashed HYDRA warrior, the Winter Soldier, who — much to the distress of Steve Rogers/Captain America — was hellbent on destroying him.

Ostensibly, it’s revealed later on that Bucky Barnes was beneath the assassin all along, and that a collection of specific words was behind his Winter Soldier manifestation. We see this activation happen again two years later in Captain America: Civil War (2016) where the terrorist mastermind, Baron Helmut Zemo (Daniel Brühl) frames Barnes for King T’Chaka’s (John Kani)  assassination and unleashes the Winter Soldier on the Avengers. Ultimately, though, Barnes joins the Avengers in the blockbuster two-part Infinity Saga finale, Avengers: Infinity War (2018) and Avengers: Endgame (2019), to combat Thanos (Josh Brolin) and his horde of monsters, as they try to kill Vision (Paul Bettany) for the Mind Stone.

And now, you can see Zemo and Barnes reunited on The Falcon and The Winter Soldier, where the reluctant title heroes search out the criminal mastermind in the hopes of discovering the Flag Smashers’ super-soldier serum plot to unsettle the world. It’s a wonder whether we will hear the activation code in the new series with it never being truly clear how Barnes overcame it.

Will we see the original Winter Solder ever again?

Do you think the Winter Soldier will be activated once again?