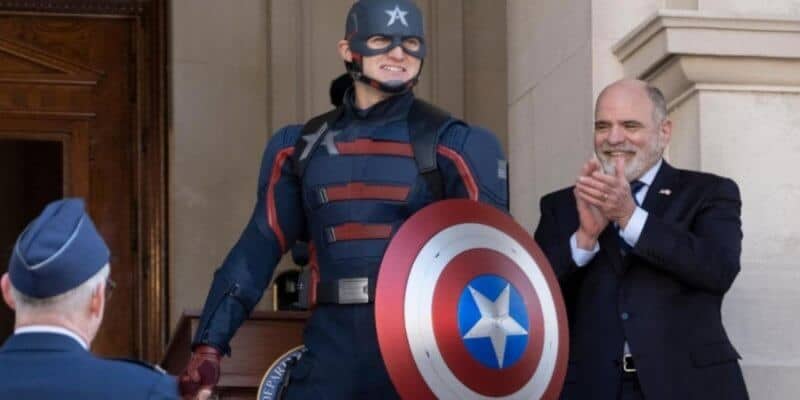 The Falcon and the Winter Soldier is the only thing that Marvel fans can talk about, and it is no wonder why. The latest Disney+ Original Series is the highest-rated entry into the Marvel Cinematic Universe.

Fans have already taken to theorizing who could be behind the Flag Smashers, led by Karli Morgenthau (Erin Kellyman), and their plot to return the world to life during the Blip with “One World, One People.”

One theory is that it might be Baron Zemo (Daniel Brühl), who was teased at the end of the last episode. We had not seen Zemo since Captain America: Civil War (2016) and he has been in prison ever since. Though Falcon and the Winter Soldier believe Baron Helmut Zemo might have some information that can give them the edge over the new Captain America.

We know that Sam Wilson/Falcon (Anthony Mackie) and Bucky Barnes/The Winter Soldier (Sebastian Stan) will be tracking the terrorist group on a global adventure. Sam suggests the because the Flag Smashers are so strong they are probably one of the big three: “Aliens, Androids or Wizards.”

Meanwhile, Marvel has introduced a new Captain America to the MCU — John Walker (Wyatt Russell) and while he is a cringe-worthy replacement to Chris Evan’s Steve Rogers, he will be playing a major role in the new TV series.

As seen in the second episode titled “Star-Spangled Man”, which delved more deeply into his character, Walker does not have any super strength or powers to speak of. Although he did test off the charts for an average man. He can toss the iconic shield with the same accuracy as Steve Rogers.

In Marvel Comics, Walker and his sidekick, Battlestar/Lemar Hoskins (Clé Bennet), became super soldiers after taking a variation of the super-soldier serum given to them by the Power Broker. After he takes up the Captain America mantle, Walker is driven mad by the serum.

Power Broker is a group — sometimes a single man — who uses different technology to give people superpowers in Marvel Comics. One version was featured in Netflix’s Jessica Jones, but Marvel Studios will probably take him in a different direction now.

And since the Power Broker was named dropped in last week’s episode it seems that The Falcon and the Winter Soldier will be following the same path for these characters. And it suggests that Power Broker is the one who gave the Flag Smashers their super strength.

Now in a leaked video one behind-the-scenes moment that was captured during filming seems to show Walker displaying the telltale strength of a super-soldier as he wields Captain America’s shield.

While it is not clear at what point in the series this scene may take place, it probably won’t be too far away since The Falcon and the Winter Soldier only has six episodes, which drop every Friday on Disney+.

At the time of publication, there are only four episodes left to debut. Presumably, Walker will be pushed to take the serum after a defeat at the hands of the Flag Smashers.

Let us know in the comments below what you think the consequences will be if the new Captain America takes the super-soldier serum in the upcoming series streaming Fridays?