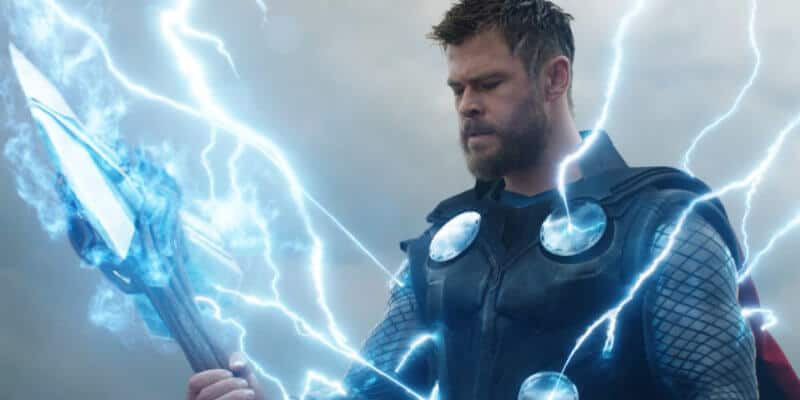 Rocket and Groot. Iron Man and Nebula. Falcon and the Winter Soldier.

There have been a number of unique pairings in the Marvel Cinematic Universe. The latest episode of The Falcon and the Winter Soldier, the record-breaking Disney+ series, saw Sam Wilson/Falcon (Anthony Mackie) reunited with Bucky Barnes/Winter Soldier (Sebastian Stan). The chemistry between the two heroes is palpable. Now, head writer, Malcolm Spellman, has teased how an upcoming Episode 5 character could star alongside the Asgardian Avenger, Thor (Chris Hemsworth).

What did Spellman say?

Speaking with Rotten Tomatoes TV, Spellman (Our Family Wedding, Empire) revealed how he would love for a character from The Falcon and the Winter Soldier — mentioning specifically Episode 5 – to partner up with Thor. He said:

“There are characters in our series who I would love to see partnered with like – it’s a very, very grounded character – partnered with one of the big world-shakers like Thor or someone like that…”

Spellman could be alluding to some of the other interesting, albeit unlikely, partnerships Marvel likes putting together. He added:

“The personality is so strong, it’s an episode five character. I’d love to see that character with Thor.”

With The Falcon and the Winter Soldier being a six-episode event, this exciting Episode 5 character could be a key player in the finale and even a link to the greater MCU and its upcoming projects. We know most of the 2021 Phase Four slate was pushed back due to another delayed release for Black Widow. Though it is worth noting that some features were saved from the shuffle, like Chloé Zhao’s Eternals and the Tom Holland led, Spider-Man: No Way Home.

It’s exciting to see Thor brought up in conversations even though his future film Thor: Love and Thunder is such a long way off. Anticipated for a May 2022 release, the Taiki Waititi (Thor: Ragnarok) directed feature has its plot severely under wraps. We do know that Jane Foster (Natalie Portman) will make her Mjolnir-wielding MCU return as The Mighty Thor, as will Tessa Thompson’s, Valkyrie. The Asgardians will also be joined by the ragtag space gang, the Guardians of the Galaxy as they battle Gorr the God Butcher, played by Batman star Christian Bale.

Fans will remember the cameo excitement during WandaVision’s run, which ultimately turned out to be Paul Bettany as White Vision, much to the dismay of some viewers. So, this character tease should be taken lightly. That being said, what is a presumed cameo if not a chance to heavily theorize about who it could be?

Who could it be?

Reed Richards (AKA The Aerospace Engineer)

Reed Richards has always been one of the smartest comic book heroes in Marvel canon. Appearing in the first issue of The Fantastic Four in 1961, Richards aka Mister Fantastic, was created by Stan Lee and Jack Kirby.

We know that the Fantastic Four will one day be integrated into the Marvel Cinematic Universe and a Reed Richards cameo was heavily theorized to happen in WandaVision when Monica Rambeau (Teyonah Parris) brought up her engineer friend, but could The Falcon and the Winter Soldier make for the scientist’s debut instead?

Richards was once tied into the infamous Civil War — the war between Captain America and Iron Man that tore the Avengers apart. In the comic book “Civil War #3”, the Fantastic Four member actually cloned Thor Odinson to help sway the battle in Iron Man’s favour.

With the mentions of a cameo already on the radar of Marvel fans, as well as the Fantastic Four acquisition by the Walt Disney Company, it is highly likely that Reed Richards might come to our screens soon. A scientist and a god paired up? Fantastic.

There are a lot of links between She-Hulk and Thor, both in Marvel Universe canon and looking ahead at the Phase Four slate. She-Hulk is an upcoming Disney+ series that was announced at the D23 Expo in 2019 by Marvel Studios President Kevin Feige. The series has Jessica Gao (Rick and Morty, Silicon Valley) attached as showrunner with Emmy-winner Tatiana Maslany (Orphan Black) starring as Jennifer Walters/She-Hulk.

In the comic books, She-Hulk joined Tony Stark (Iron Man), Steve Rogers (Captain America) and Thor to battle the Dark Celestials in the new 2018 Avengers series. Thor and Walters’ relationship blossomed into an off again/on again romance that if brought to the big screen would sure delight the Marvel audience. Director Taiki Waititi has mentioned before that Thor: Love and Thunder is very romantic and just because Jane Foster is back, who is to say that the romance can’t be from a Thor/She-Hulk union?

Going back to a possible The Falcon and the Winter Soldier appearance, when not helping to save the world as She-Hulk, Walters is an American lawyer. After the events of the new Captain America show received a content warning for its violent scenes, viewers might find some of our favorite heroes (or villains!) needing legal counsel, and who better to help than the green-skinned heroine.

There is a lot to suggest She-Hulk will make an appearance soon, and we can only hope that her entrance into the MCU is both authentic and interesting, maybe with a little fan-service thrown in for good measure.

Whoever turns up in Episode 5 is sure to be polarizing. As with any fandom, especially one as huge as Marvel, there is always a debate over who should appear, and when and how. With Spellman’s hint at a possible Thor partnership, this mystery figure could be the key to uncovering not only the direction of Sam and Bucky’s fight against Baron Helmut Zemo (Daniel Brühl), but the direction of the MCU as a whole.

Or, it could just be Paul Bettany, again.

Who do you think the Episode 5 cameo will be?