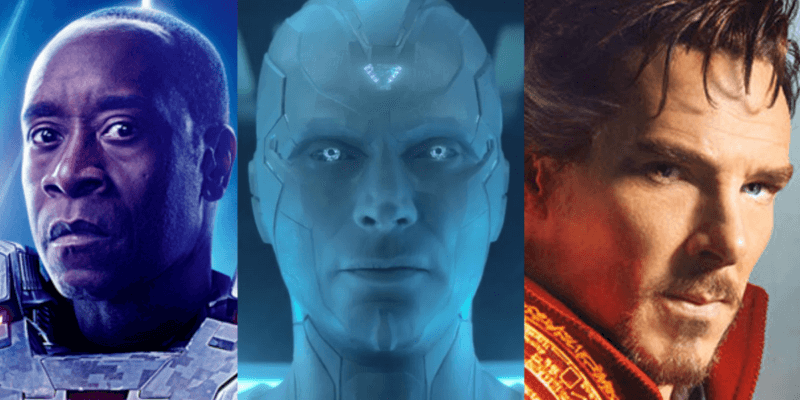 Marvel’s first Disney+ original series WandaVision is now over, but its impacts will be felt throughout the rest of the Marvel Cinematic Universe. In just nine episodes it set up a lot of what Marvel fans can expect in Phase 4. One of the lingering questions is when and how Vision will show up again.

Vision (Paul Bettany) originally died (twice) back in Avengers: Infinity War (2018). When he showed up again in WandaVision there were a million theories on how he was resurrected. In the end, the Vision that existed inside the Hex was created from the power of the Mind Stone inside Wanda/ Scarlet Witch (Elizabeth Olsen).

However, WandaVision head writer Jac Schaeffer introduced another version of Vision to the MCU – White Vision, who was made by SWORD from the remnants of Vision’s body. In the final episode, both Visions came together and the epic laser battle that fans expected was subverted with a deep philosophical debate.

Related: ‘WandaVision’ Who Is Monica Rambeau?

The two Visions decide that in some way they are both the real Vision. The version from the Hex faded out of existence when Wanda’s spell collapsed. Meanwhile, the White Vision flew off to who knows where to wrestle with his new memories. This left fans wondering when they would see Vision again.

One rumor breaking right now is that Disney and Marvel Studios may be working on a series focusing just on Vision, while Wanda goes off to Doctor Strange in the Multiverse of Madness. Seen on giantfreakinrobot.com they reported that:

“According to our trusted inside source […], a Vision series is currently in development over at Marvel Studios and would be another addition to the ongoing Marvel Cinematic Universe shows available on the Disney+ streaming platform.”

A Vision solo series could follow a storyline from the 2015 comic book Vision, written by Tom King with art by Gabriel Hernandez Walta. The story follows the synthezoid at a time after he splits from the Scarlet Witch and tries to create idealized suburban lives with an android family.

Will Vision Appear in Armor Wars?

Since technically Vision’s body is based on Stark Technology he could play a pivot role in the series. It will surely deviate from its comic book origins since Tony Stark will not appear. Perhaps one of the other mysterious projects going on in SWORD was another new Iron Man armor and White Vision could show up to get revenge on his creators.

Could He Reunite With Wanda in Doctor Strange?

Elizabeth Olsen’s Scarlet Witch has been confirmed to return as in Doctor Strange in the Multiverse of Madness. Whether she will be a villain or work alongside the Sorcerer Supreme / Doctor Stephen Strange (Benedict Cumberbatch) Marvel fans will have to wait until its March 25, 2022, release date.

The plot of the Doctor Strange sequel has been kept top secret by Kevin Fiege and the company. We know it will finally open the Marvel Cinematic Universe up to the multiverse. If Wanda ends up being driven mad by the Darkhold and her search for her twin sons Billy/ Wiccan (Julian Hilliard) and Tommy/ Speed (Jett Klyne), Vision could show up to bring her back from the edge.

Even if White Vision does not show up in Multiverse of Madness, fans could see yet another version of the character from another universe. The upcoming Marvel film has endless possible directions it could head off in.

None of the rumors or possibilities are mutually exclusive. Just like The Falcon and the Winter Soldier is not the last place we will see Sam Wilson (Anthony Mackie) or Bucky Barnes (Sebastian Stan), the interconnected nature of the Marvel Universe means Vision could show up anytime or anywhere, even perhaps Captain Marvel 2.

Let us know in the comments below where you would like to see Paul Bettany’s Vision show up again in the MCU? Are you excited for a possible solo TV series coming to Disney plus?

Comments Off on Vision’s Return to the MCU Is Inevitable