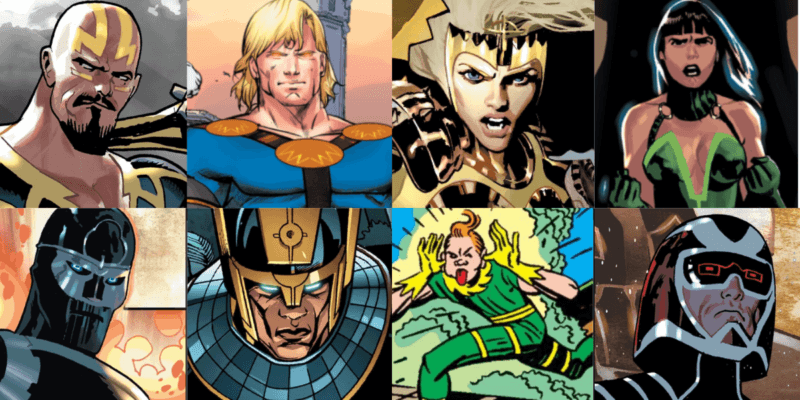 Amid the reshuffling of the Marvel Cinematic Universe Phase Four, which saw Black Widow delayed again, many of the upcoming films have been pushed back later in 2021. One film that survived the delay was Eternals from director Chloé Zhao, which is still slated for November 5, 2021.

Eternals is studded with big Hollywood names. From Salma Hayek as Ajak, to Richard Madden as Ikaris and Lauren Ridloff as Makkari. Oh, and did we mention Angelina Jolie as Thena and Kit Harington as Dane Whitman/Black Knight? It might even have the biggest blockbuster billing of all of the recent Marvel films. The Eternals first debuted in Jack Kirby’s Marvel comics series of the same name in 1976. Kieron Gillen is onboard as writer for the new Eternals comics which began in January this year.

Brian Tyree Henry (Phastos), who stars as the first gay superhero to be featured in a Marvel film, recently spoke about Phastos’s powers. Appearing on The Kelly Clarkson Show, Henry teased:

“Wait ‘til you see my powers. They’re…I don’t want to give nothing away because, like I said, Marvel’s standing right here…”

Like the other Eternals, the aliens who were created by the Celestials, Phastos possesses powers linked to the cosmos as well as other abilities such as superhuman strength, flight, and teleportation. What Henry might be hinting at is the potential amount of CGI spectacle the film is bound to have. It is sure to be a contrast to the intimate and often quiet films Zhao usually directs. The director is currently the talk of Hollywood with her festival frontrunner Nomadland starring Frances McDormand.

What will be great to see is how Marvel moves on post-Thanos. The Titan warrior caused the biggest destructive event in MCU history, so it’s going to be interesting as to how Marvel tackle the introduction of new, possibly even stronger and more dangerous, characters like those in Eternals. There is also the question of why the release of Eternals wasn’t shifted like those of other films in MCU Phase Four. The fact it kept its original date probably says a lot when it comes to how Zhao’s film will link to the greater story arc of this new phase.

What are the fans saying?

As expected, fans were ecstatic when Marvel’s Eternals wasn’t affected by the MCU switch up. Some speculated that the news meant an upcoming update!

There was A LOT of screaming:

Some just acknowledged the hype:

“ETERNALS. Trending with no footage or set pictures.”

ETERNALS. Trending with no footage or set pictures. ✨ pic.twitter.com/QDNIhBpvB1

“Eternals fans…we see you, we hear you and we appreciate you. You will be rewarded in the foreseeable future. Thank you for your patience.”

Eternals fans… we see you, we hear you and we appreciate you. You will be rewarded in the foreseeable future. Thank you for your patience.

What is Eternals About?

“Marvel Studios’ Eternals features an exciting new team of Super Heroes in the Marvel Cinematic Universe, ancient aliens who have been living on Earth in secret for thousands of years. Following the events of Avengers: Endgame, an unexpected tragedy forces them out of the shadows to reunite against mankind’s most ancient enemy, the Deviants.”

Are you excited to see Eternals? Let us know!

Comments Off on New Marvel Star: “Wait ‘Til You See My Powers”