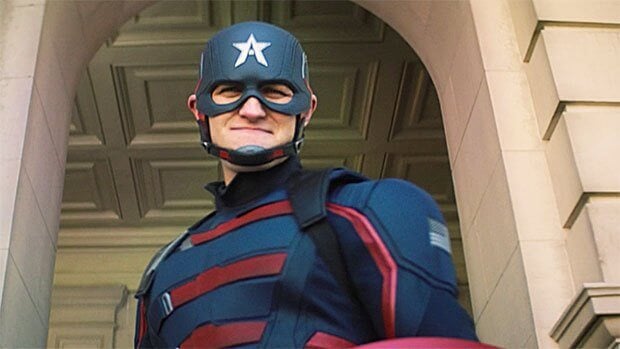 It’s no secret that The Falcon and the Winter Soldier is exploring race relations in far more depth than the MCU ever has. One of the central characters is John Walker, the new Captain America.

However, is Walker more than a mere antagonist for Sam Wilson and Bucky Barnes? Does he, in fact, reflect the establishment of “the norm” in the form of an “All-American” white man as Captain America?

Furthermore, how will The Falcon and the Winter Soldier continue to challenge these perceptions? Let’s dive in.

The most social commentary we’ve seen in a Marvel project

Episode 2 of The Falcon and the Winter Soldier certainly didn’t shy away from exploring issues of racism. Notably, Bucky (Sebastian Stan) and Sam (Anthony Mackie) meet Isaiah Bradley, who is revealed to be the sole survivor of a group of Black Super Soldiers who were experimented on after Steve disappeared. Indeed, Bradley was imprisoned for thirty years as the government hushed up the project.

A more overt form of racism comes just as Bucky and Sam are thrown out of Bradley’s house. Sam, justifiably angry about the situation, lashes out at Bucky, asking if Steve knew about the program. However, in an all-too-real encounter, a police officer questions whether the plain-clothed Falcon is “bothering” Bucky.

This, of course, references real-world occurrences in which police have done similar things to Black men and women. Additionally, as soon as the officer realizes that Sam is an Avenger, his tune changes dramatically and he begins apologizing. This is, seemingly, a reference to situations in which certain Black celebrities have had authorities shift treatment of them due to their fame.

Then, there is John Walker.

It’s a welcome surprise that John Walker (Wyatt Russell) isn’t an overtly antagonistic force. Pre-release footage and comic book precedent made it seem that he may be in direct conflict with the Falcon and the Winter Soldier. However, he actually tries to work with them throughout the second episode. This makes for a far more interesting pseudo-villain.

What John Walker may reflect, however, is a more casual form of white supremacy. While he isn’t an overt symbol of white supremacy, he is seemingly serving as a foil to the racism that Black people in America have experienced — fans can imagine, for example, how differently things might be playing out in regard to Cap’s current governmental power if Sam had kept Captain America’s shield.

Walker tries to maintain an affable approach to the two heroes and seems unsure of his position as Captain America. He even offers Sam the position of his “wingman”, trying to replicate Steve Rogers (Chris Evans) in every way. Of course, this shows no respect for Sam, who he knows gave up the shield.

Bucky instantly — and vehemently — balks following the “wingman” comment and the two Avengers leave Walker’s military transport vehicle. Walker’s apparent assumption that Sam can only serve us a glorified sidekick will likely be challenged whenever Sam does take back the shield, presumably proving that a Black man can be an exceptional Captain America.

Walker has seemingly put the groundwork in to become Captain America. He is an accomplished soldier and seemingly wants to live up to the legacy of Steve Rogers and that iconic shield. Yet, from the Government’s perspective, it’s no surprise that it chose another blonde-haired, blue-eyed, “All-American hero”.

In this sense, it’s clear that Sam Wilson doesn’t fit the stereotypical idea of what Captain America has looked like through the years. Thus, Walker’s appointment maintains the status quo.

In some ways, it also undermines the fact that Steve Rogers was a genuinely selfless person who fought for liberty and justice for all. While seemingly not a “bad” guy, Walker appears to expect things to be handed to him on a silver platter now that he bears the Captain America name. So far, he seeks to emulate Steve’s path without having any of his heart.

Instead, he is seemingly eating-up the fame and power that comes with the title without the authentic passion that Steve possessed — and, arguably, that Sam possesses, too.

Who is John Walker in the Marvel Cinematic Universe?

Malcolm Spellman has taken the MCU to a new level with The Falcon and the Winter Soldier, and the character of Sam Wilson is at the heart of everything. We get to see the Marvel Cinematic Universe through the eyes of a Black man for one of the first times since Black Panther, and see the racism he endures simply because of the colour of his skin.

Seeing things through Sam’s eyes makes characters such as John Walker all the more interesting. As mentioned, Spellman positions Walker not as a cartoonish villain, but a somewhat relatable character, albeit one who embodies some problematic tendencies. He’s a seemingly good soldier with somewhat decent intentions as he tries to live up to the legacy of the shield. However, in doing so, he’s disregarding Rogers’ wishes and somewhat marginalizing his friend in the process.

We can’t wait to see where Walker goes, and whether he ends up becoming a super soldier, a villain, or perhaps even an ally to The Falcon and the Winter Soldier. Regardless, Russell is playing him fantastically and we’re excited to see where the series goes next.

It’s fascinating to see a Disney+ exclusive set in the Marvel Cinematic Universe that delves so deeply into modern social issues. We can’t wait to see what head writer Malcolm Spellman has for us next. Fortunately, the Marvel universe is in safe hands, particularly is Falcon is set to become the new Cap.

The Falcon and the Winter Soldier is available to stream on Disney+. It stars Anthony Mackie, Sebastian Stan, Daniel Brühl, Wyatt Russell, and Emily VanCamp and was created by Malcolm Spellman.

Editor’s Note: The views expressed in this article do not necessarily reflect the views of Inside the Magic overall.