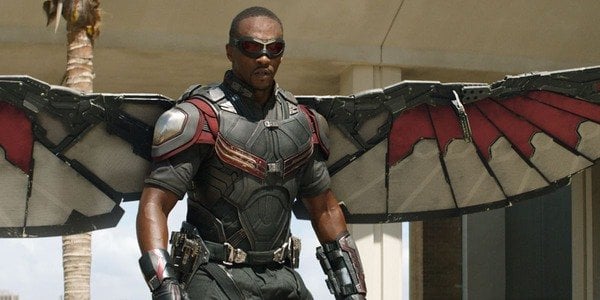 It’s been a while since Captain America/Steve Rogers (Chris Evans) handed his famous shield to Falcon/Sam Wilson (Anthony Mackie) at the end of Avengers: Endgame (2019). Last week saw the launch of Sam’s, and Bucky Barnes’’s (Sebastian Stan), new show, The Falcon and the Winter Soldier, and yet it may be a while until we see Falcon wearing the Captain America suit.

That being said, Disney has revealed Falcon’s America suit in a new merchandise release of Marvel Select action figures — and, as expected, Marvel fans are overjoyed. A listing on TMall, which is now no longer available, revealed the superhero costume.

At the end of first episode, fans were introduced to a new Captain America but it would seem, based on these official action figure releases, that Sam will someday don the famous red, white and blue, too and take up the Captain America mantle.

It’s possible that viewers may not get to see Sam’s iteration of Captain America until the very end of the six-episode series. We saw with WandaVision that the creators like to build up the climatic reveals with Easter eggs and nods to the character’s comic book history. Just look at Wanda’s Halloween costume versus her superhero attire in the finale. There is certainly a lot to come. We still need to meet Helmut Zemo (Daniel Brühl) and Emily VanCamp’s, Sharon Carter.

We know at some point, fans will get what they are waiting for – but it could be weeks away.

**The following images may contain spoilers for The Falcon and the Winter Soldier.**

“Captain America” (The Falcon and The Winter Soldier ver.)”

"Captain America" (The Falcon and The Winter Soldier ver.)#MarvelSelect pic.twitter.com/vakhrwQsMZ

What are fans saying?

With the comic book-accurate adaptation of the star-spangled superhero suit, it’s clear that Marvel fans are pretty hyped by this reveal. Users took to social media to share what they thought about Falcon’s new costume.

“It’s toys. It’s always the toys that give our first looks at the cool [stuff] in movies, tv, and games!”

Support poured in for the superhero suit reveal, with one reply saying:

“ITS SO COOL IM GONNA CRY”

“IM SO READY TO SEE HIM IN THAT SUIT”

IM SO READY TO SEE HIM IN THAT SUIT

We don’t know when in Phase 4 of the Marvel Cinematic Universe — or if — we will get to see Falcon flying as Captain America. It certainly is headed that way, though. With Captain America’s shield passing from Steve Rogers to Sam, to the imposter Cap making an entrance at the end of the first episode, Marvel is laying out the trail for a huge reveal of the real new Captain America.

When Do You Think Sam Will Become Captain America? Let Us Know in the Comments!