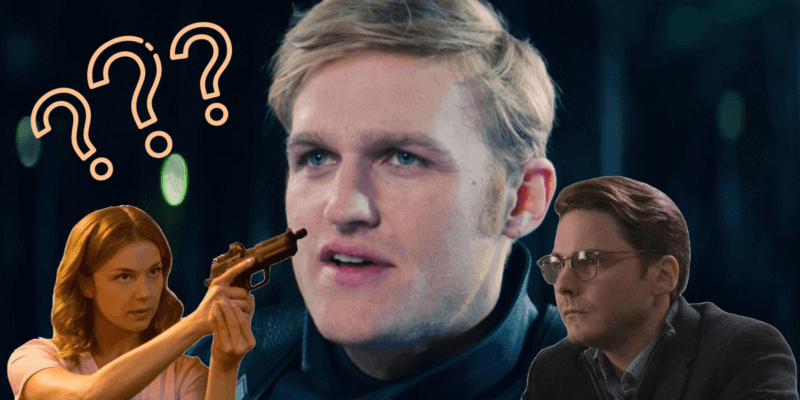 WandaVision made the “good character is actually bad” trope cool again. When Agnes turned out to be Agatha Harkness (All Along) it reminded Marvel fans of how sometimes villains can hide in plain sight. The last few years in the Marvel Cinematic Universe have been taken up with the Avengers battle against Thanos (Josh Brolin), ending with Avengers: Infinity War (2018) and Avengers: Endgame (2019) —  the climax of the Infinity Saga and the MCU Phase 3 overall.

But, could a sudden reappearance of a supporting character in Marvel’s latest Phase 4 television series suggest that there’s more reveals yet to come?

Yes, S.H.I.E.L.D agent, Sharon Carter (Emily VanCamp) and Daniel Brühl’s Baron Helmut Zemo are back in the MCU. And they came back with a bang. Zemo, who is most well-known for his Civil War appearance where he reactivated the Winter Soldier, joined the reluctant Wilson and Barnes to track down the super-soldier serum that has made its way to the streets courtesy of the Flag Smashers, led by Karli Morgenthau (Erin Kellyman). In the criminal sanctuary of Madripoor — which itself is a massive hint at the future of the MCU — we meet VanCamp’s Sharon Carter (AKA Agent 13) as the heroes hunt for the Power Broker — the supposed orchestrater of the super serum scheme.

While this reunion may seem like a good thing, especially with how well Carter took down those thugs, her reentry into the MCU at this specific point in time might suggest a more nefarious motive — one that will most definitely break not only the hearts of Sam and Bucky, but shatter those of the fans too.

What is the theory?

It’s safe to say that the Sharon Carter we see in the latest episode of The Falcon and The Winter Soldier (“The Power Broker”) is a far cry from the hopeful agent we saw in Captain America: Civil War where she could have potentially become the next Peggy Carter (Hayley Atwell) in Steve’s life. Living as a fugitive from the law, her savvy Madripoor knowledge and her time amongst the kingpins of the criminal underground, may point at her being the infamous crime “King”, the Power Broker.

As a reminder, this is not a spoiler, it’s a theory — but, a theory that kind of makes a lot of sense. The suggestion is that Sharon Carter is the Power Broker, that her time since the Avenger’s Civil War has changed who she is and what she is willing to do to get by. Carter tells Wilson, Barnes, and Zemo that she’s managed to survive by selling stolen artwork to high powered criminals in the city. She also seems…pretty well off. Which is fortunate in a way, seeing as though Cap’s squad pretty much forgot about her.

Not only does she seem to have the political weight to move freely throughout Madripoor, but her insider knowledge of the syndicates who work the streets is detailed. She is confident when we see her again, seemingly woven into the very fabric of criminal society. This theory takes on a new light by reevaluating the meaning behind Carter’s last words in the episode, when she says — “We’ve got a big problem. Actually, a couple of them.”

i just know miss sharon carter is the power broker and you know what ? good for her

Creator and showrunner Malcolm Spellman and director Kari Skogland are maybe just throwing red herrings in the way to distract us from the true identity of the crime lord, but one thing is for sure – if Sharon Carter is the Power Broker, we can be certain that Sam and Bucky won’t be impressed.

Does Emily VanCamp know about this theory?

Yes, in fact she does. Speaking to Variety, the Marvel actress said:

“Well, that’s a good question. I mean, the Power Broker could be anybody. Also, there are several characters that have yet to be seen. So, I mean, I can’t say anything.”

We know that Spellman has indicated that one of his favorite upcoming appearances is a character from Episode 5, which he also stated would make a perfect pairing for the Asgardian Thunder god, Thor. Could this future character be the Power Broker?

VanCamp was even featured in The Falcon and The Winter Soldier marketing campaign setting her up for a solid return to the MCU. She shared the Sharon Carter poster to her millions of followers with the caption:

Who is the Power Broker?

The character first appeared in the Marvel Comic Machine Man #6 and has had a violent history with the Marvel heroes, namely Captain America, Falcon, and the Hulk. The character has also had comic book connections with the Red Skull, and as we know, that villain has already appeared in Captain America’s MCU story. In the comics, the Power Broker has always been a man. However, we’ve already seen Marvel go against gender rules in the upcoming epic Eternals (2021) with The Walking Dead actress Lauren Ridloff cast as Makkari, so who’s to say that the Power Broker can’t be a woman in The Falcon and The Winter Soldier?

As the owner of Power Broker, Inc., a company that recruits and sells the services of Super Villains, the Power Broker is a businessman through and through…and will stop at nothing to win over clients and strike lucrative deals.

This is all just speculation for now, but all signs seem to point to Sharon Carter being the next criminal mastermind of the Marvel Cinematic Universe.

What do you think? Is this theory true?