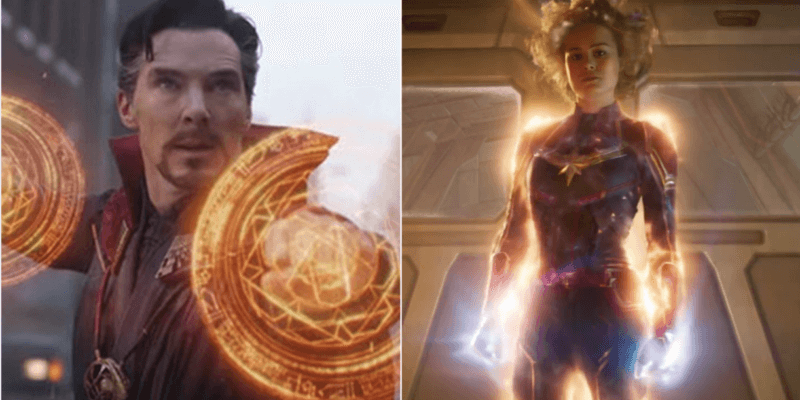 Brie Larson (Captain Marvel/Carol Danvers) and Benedict Cumberbatch (Doctor Stephen Strange) are two of the biggest names in the Marvel Cinematic Universe. Both MCU stars have been involved in the Avengers franchise, plus their own standalone franchises — and both have new movies coming out next year.

British actor Cumberbatch will star in Doctor Strange in the Multiverse of Madness (2022) alongside WandaVision leading lady Elizabeth Olsen (Scarlet Witch/Wanda Maximoff), while Larson will reprise her MCU role in The Marvels (2022) with another WandaVision star, Teyonah Parris (Monica Rambeau).

Intriguingly, even though both actors are clearly content to continue their work in the Marvel Cinematic Universe — unlike Robert Downey, Jr. (Tony Stark/Iron Man) who cut ties with the MCU following his character’s tragic death in Avengers: Endgame (2019) — neither of them will voice their characters in the upcoming animated Marvel Studios series, What If…?

The question on everyone’s mind is why Larson and Cumberbatch are not appearing since neither of them, presumably, were filming their upcoming Marvel movies when What If…? was in production — and, theoretically at least, there’s a very good reason why.

They could both be making their Star Wars franchise debuts in the same series.

The call for him to be cast in the role heated up when the antagonist’s name was whispered to Ahsoka Tano (Rosario Dawson) by Corvus Magistrate Morgan Elsbeth (Diana Lee Inosanto) in The Mandalorian Season 2, Episode 5 (“Chapter 13: The Jedi”).

This cemented that Thrawn would be appearing in showrunner Jon Favreau and executive producer Dave Filoni’s Mandalorian universe, but we still don’t know who will be playing him, although recent reports indicate that Thrawn has already finished filming his first live-action series. If these reports play out, the character will be making his debut not in Mandalorian spinoff, Ahsoka, as expected, but instead in The Book of Boba Fett.

Although Cumberbatch has denied rumors that he will be playing Thrawn, this wouldn’t be the first time a Star Wars actor — or Marvel actor, for that matter — wasn’t allowed to confirm a role. Ewan McGregor, for example, recently spoke about how long he had to lie about the fact that he was reprising as Jedi Master Obi-Wan Kenobi.

Furthermore, if Cumberbatch is playing Grand Admiral Thrawn in The Book of Boba Fett, it opens the door for Brie Larson to finally join the Star Wars universe as Mara Jade Skywalker, a role for which she is reportedly the frontrunner.

It would make sense for Thrawn and Mara Jade — Luke Skywalker’s wife in Star Wars Legends materials — to make their live-action Star Wars canon debut together. In Timothy Zahn’s Thrawn Trilogy of novels, the two worked closely together during Mara Jade’s time as an Emperor’s Hand assassin for the Galactic Empire.

This was, of course, long before she became a Jedi Knight’s wife, and a Jedi Council member in her own right.

Many Star Wars Expanded Universe fans believe that Mara Jade’s debut in The Mandalorian saga is inevitable now that Luke Skywalker (CGI Mark Hamill) has made his return to the Star Wars story as Grogu’s Jedi Master.

At this time, the only solid casting information we have about The Book of Boba Fett comes from the post credits scene following The Mandalorian Season 2 finale episode (“Chapter 16: The Rescue”). Temuera Morrison will return as bounty hunter Boba Fett and Ming-Na Wen will be back as Fennec Shand.

There are unconfirmed rumors that both Mandalorian leading man Pedro Pascal (Din Djarin) and Timothy Olyphant (Mos Pelgo Marshal Cobb Vanth) — who was introduced in The Mandalorian Season 2, Episode 1 (“Chapter 9: The Marshal”) — will appear, as well.

Keep in mind that, at this time, neither Lucasfilm nor Disney has confirmed anything about casting for Grand Admiral Thrawn or Mara Jade Skywalker.

But, it seems inevitable that these characters will be appearing sooner rather than later — and they may have a major connection to the MCU.

What are your thoughts? Could Cumberbatch and Larson have been busy filming The Book of Boba Fett?