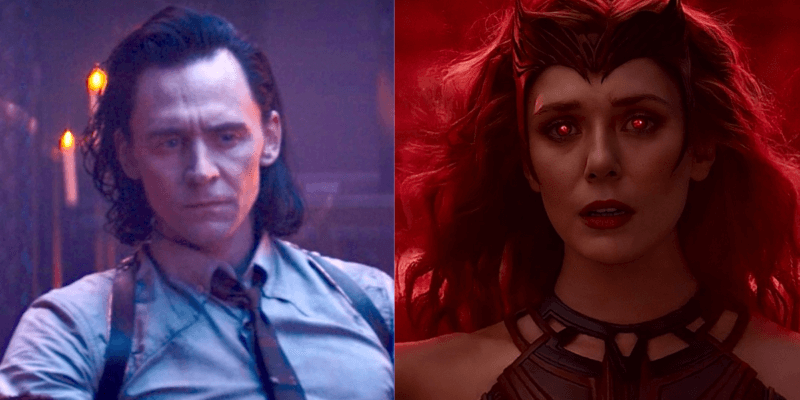 Marvel’s Loki series has fundamentally changed the game for the MCU as we have come to know it. The Sacred Timeline is no more, and Marvel Phase 4 has ushered in the era of the new Marvel Cinematic Multiverse. Some Marvel fans are now looking back at the finale episode of WandaVision and have realized that Loki was rewriting the MCU before it even aired.

Be aware that there are spoilers ahead for the final episode of Loki, which is available now to stream on Disney+. And a new trailer just dropped for the behind-the-scenes feature Marvel Studio’s Assembled: The Making of Loki for those who cannot let go of the God of Mischief just yet.

In the climactic conclusion of the six-episode series Sylvie (Sophia di Martino) betrays Tom Hiddleston’s Loki. The Lady Loki variant decided she wanted revenge against the Time Variance Authority (TVA) more than she was willing to listen to the trickster god and He Who Remains (Jonathan Majors) about any potential Multiverse madness that would come from killing the Kang the Conqueror variant.

This leaves the god of Mischief stranded in an alternate reality where his one friend, Owen Wilson’s character TVA Agent Mobius M. Mobius has no idea who the frost giant prince is. Loki finds himself in a version of the TVA that no longer has the fake Time-Keeper statues, but one with the face of its new conqueror – Kang.

After the final episode of Loki aired Marvel placed it in its new spot on the MCU timeline, after Avengers: Endgame (2019), and before WandaVision. This confused some as the events of Loki pick up with the God of Mischief right after his defeat in The Avengers (2012). Although it does also take place after Tony Stark aka Iron Man (Robert Downey, Jr.) botched the Time Heist in Endgame allowing the mercurial villain to escape with the Tesseract/ Space Stone.

The most intriguing part of its placement is that now Marvel Studios is pointing out that despite the fact that Loki jumps across the Marvel Timeline, it definitely takes place before WandaVision. WandaVision picks up Wanda Maximoff aka Scarlet Witch (Elizabeth Olsen) right after she returns from Thanos’s (Josh Brolin) snap and must deal with the loss of the love of her life Vision (Paul Bettany) who had an Infinity Stone ripped out of his body in Avengers: Infinity War (2018).

Taking a look back at the finale episode of WandaVision, when Wanda finally becomes the Scarlet Witch and defeats Agnes/ Agatha Harkness (Kathryn Hahn), it becomes very clear why Loki takes place before WandaVision on the official MCU Timeline. Marvel’s Loki and WandaVision end almost entirely side by side as the Marvel Multiverse is finally born before the Doctor Strange sequel.

One Marvel fan took to YouTube to line up the two final episodes up so that you can see how at around roughly 27:30 in each episode the events start to line up:

As Wanda reveals her ruins to Agatha and becomes the Scarlet Witch, she becomes a full-fledged Nexus Being. A Nexus Being is more than just a variant like all the ones introduced in the Loki series. Wanda is now powerful enough to impact the flow of time itself and her powers to alter the probability of things happening can dictate the events beyond the Sacred Timeline. She is even shown to have gone back to her younger self when she was being experimented on before Avengers: Age of Ultron (2015).

More than a variant, Wanda becomes a walking Nexus Event. After embracing her powers anything she does has the potential to create a new timeline. Notice how the timeline starts to branch off before Sylvie kills He Who Remains. It is then that he suddenly does not know what will happen next. Wanda’s new Chaos Magic is more than he can adapt to.

Now that time travel has been introduced into the Marvel Cinematic Universe and the next phase of Marvel films will explore non-linear storytelling with series released out of order, keeping the events on the timeline in order will become a challenge.

Spider-Man: Far From Home (2019) takes place eight months after Endgame, WandaVision only weeks, then The Falcon and the Winter Soldier two months before Far From Home. Loki season one and its eventual season two will be jumping all-across time and Black Widow was set back in 2016.

And the next Marvel series, the animated What if…? will take place far outside the old Sacred Timeline. It will explore some of the new alternate realities Sylvie unleashed. This includes one based on the popular Marvel Comic Marvel Zombies. One version will see Steve Rogers (Chris Evans) not become Captain America but Peggy Carter (Hailey Atwell) become Captain Britain. And a version of Carol Danvers aka Captain Marvel not voiced by Brie Larson.

The Citadel at the End of Time also does not exist on the timeline at all. Which is why, while Wanda’s battle lines up with Sylvie and Loki’s confrontation with He Who Remains, it jumps to her post-credit scene which lines up with Sylvie killing He Who Remains. It is only after she kills the man behind the TVA that Wanda can hear the voices of her children Billy aka Wiccan (Julian Hilliard) and Tommy aka Speed (Jett Klyne), who will return to become Young Avengers.

How Does the New Marvel Multiverse Work?

If the Marvel Multiverse is already driving you mad, it would be helpful to watch the way that the Sacred Timeline was presented in the Loki series finale. It is a circle that surrounds the Citadel – a loop that never ends and never begins, it just repeats. He Who Remains tells Sylvie it does not matter if they chose to replace him and run the TVA or if she kills him because he will just end back up in the same spot again.

The moment that Sylvie kills him the Multiverse begins to branch off from all points on the Sacred Timeline, creating countless new alternate timelines and realities within the Marvel Universe. Once there was only one path of time that He Who Remains controlled and now there is a multiverse, and more confusingly the multiverse has now always been there.

Hopefully, it will become much clearer when Wanda and Loki team up with Doctor Strange in Doctor Strange in the Multiverse of Madness on March 25, 2022. More about how the new timelines work will surely be revealed in Loki season 2, which may hit Disney+ as soon as fall 2022. And we will see a new variant of Jonathan Major’s Kang in Ant-Man and the Wasp: Quantumania on February 17, 2023.

Let us know in the comments if you think that the WandaVision and Loki finales were meant to line up this way. And what did you think of the finale?

Comments Off on ‘WandaVision’ & ‘Loki’ Finales Have an Unbelievable Connection