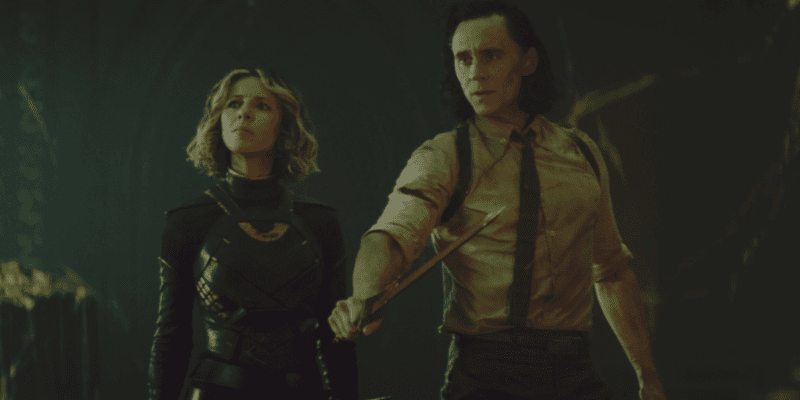 The events of the season finale of Loki have — for better or worse — irrevocably altered the course of Marvel’s mad multiverse. In episode 6 of Loki, “For All Time. Always.,” our favorite Loki variants – Endgame Loki (Tom Hiddleston) and Sylvie (Sophia Di Martino) have introduced a new brand of chaos to the MCU — one that opens up infinite opportunities for storytelling, while also leaving Marvel fans with a million lifetimes worth of questions. If a harmoniously pruned Sacred Timeline sounds similar to the “perfectly balanced” universe Thanos achieved with his Infinity Stones in Infinity War (2018), it’s because Marvel Studios has officially begun building towards its next major Endgame-level event.

Read on for SPOILER-filled insight into the motivations of the bombshell character introduction and the massive power shift unfolding in the Marvel Cinematic Universe.

Who controls the Time-Keepers?

The Season 1 finale of Disney+ series Loki revealed the powerful entity behind the Time-Keepers — the faux protectors of the Sacred Timeline exposed as “mindless androids” in Loki episode 4. He Who Remains, portrayed by Jonathan Majors, is a variant of Kang the Conqueror. He Who Remains created the Time Variance Authority and the Time-Keepers after ending to a multiversal war eons ago. The war was started by Kang variants seeking supremacy for their own respective timelines. He Who Remains created the TVA as an efficient bureaucracy to enforce the integrity of his Sacred Timeline to keep the Kang variants in check.

Sylvie (Sophia Di Martino) drives her blade through the chest of He Who Remains (Jonathan Majors) after sending Loki (Tom Hiddleston) back to the TVA. With Loki out of her way, the Kang variant does nothing to defend himself against Sylvie’s drive for vengeance. In fact, the Kang variant doesn’t attempt to escape or attack Loki and Sylvie at all once he’s through explaining his role as keeper of the Sacred Timeline and cosmic peace. He completely puts his fate, and the fate of reality itself into the hands of two Loki variants. Why doesn’t this Kang variant — He Who Remains — care if he lives or dies?

Jonathan Majors is confirmed to appear in the upcoming Ant-Man and the Wasp: Quantumania (2023) as Kang the Conqueror. The variant that Sylvie kills during the climax of the Loki finale never specifically gives his name — though he does admit he’s been called “conqueror” — nor does he name the wicked variant he forewarns of at great length. He Who Remains warns the Loki variants, “You came to kill the devil, right? Well, guess what? I keep you safe.  And if you think I’m evil, well, just wait till you meet my variants.”

He who remains offers Sylvie and Loki a choice — to take over the TVA from him and continue to prune branching timelines, or to kill him and unleash the havoc of multiversal war. In other words, they can choose “stifling order or cataclysmic chaos.” When Loki challenges why the Kang variant would willingly give up control to the walking nexus event duo, he explains,

“Buddy, Im tired. And I’m older. I’m older than I look. This game is for the young. The hungry. I’ve gone through a lot of scenarios trying to find the right person to take this spot and it turns out that person came in two. But it’s definitely you two. So, no more lies — You kill me and the Sacred Timeline is completely exposed. Multiversal war. Or you takeover and return to the TVA as its benevolent rulers. Tell the workforce who they are and why they do what they do.”

In this classic villain monologue, masterfully performed in the gripping Loki finale by Jonathan Majors, He Who Remains maintains that his ends justify his means — namely pruning innocent timelines. Much like Thanos in Avengers: Infinity War (2018) and Avengers: Endgame (2019) seeks to create a balance by reducing the number of living beings to a number more in line with the finite resources of the universe, He Who Remains sees his mission as necessary — “Not personal, practical.”

As Sylvie stabs He Who Remains directly in the heart, he laughs at the act’s futility, saying, “I’ll see you soon.” Kang knows all too well that the rise of his evil variant, like Thanos, is inevitable. A new main villain for the Marvel Cinematic Universe has arrived.

What does Kang want?

While the Kang variant deposed in the Loki season finale fancied himself a benevolent dictator who prized “cosmic harmony” and order rather than chaos, he relates that his variants are far more ruthless in imposing their tyrannical will. It’s implied that this evil Kang variant will be the next big bad of the Marvel Cinematic Universe — presumably the Kang the Conqueror set to join Ant-Man 3 (2023).

Who is Kang the Conqueror in the Marvel Cinematic Universe?

As the Kang variant explains in the Loki season finale, Kang is just a man “flesh and blood.” One particular Kang variant is a scientist living on Earth in the 31st century. This Kang discovered the multiverse — universes stacked on top of his own. Then the Kang variants throughout the multiverse began visiting each other, traveling to different timelines, exchanging technology and knowledge. While a quiet peace lasted for awhile, eventually evil Kang variants rose to prominence who saw the multiverse purely as more worlds that must be conquered and ruled.

The Kang the Conqueror of Marvel Comics was created by Stan Lee and Jack Kirby as a frequent and worthy adversary to the Fantastic Four and the Avengers. His goal is to rule the multiverse, by controlling every timeline branch and bending it to his vision. Kang desires control not just of his universe, but of the entirety of the multiverse. Many notable iterations of Kang the Conqueror have been featured in Marvel Comics over the years like Rama-Tut — a Kang variant that time-traveled to rule Ancient Egypt — or Iron Lad — a Young Avenger, adolescent version of Kang equipped with a biometal suit. However, Kang’s most notable alternate version is Immortus. Immortus is a Kang variant who prefers preservation of timelines, rather than domination — similar to the version who appeared in the Loki season 1 finale.

With the Doctor Strange (2016) sequel, Doctor Strange in the Multiverse of Madness due out in 2022 promising to see Scarlet Witch (Elizabeth Olsen) and Doctor Strange (Benedict Cumberbatch) unravel even more mysteries of the multiverse, it looks like we could see more multiverse action even sooner. It’s rumored that Spider-Man: No Way Home (2021) will feature multiversal variants heavily in it’s storyline — even spanning Disney and Sony Pictures.

Sylvie (Sophia Di Martino) and Loki (Tom Hiddleston) developed a special, romantic bond over the course of the series so far. As it turned out however, the bond was doomed from the beginning due to their relationship’s fatal flaw — Sylvie can’t trust, and Loki can’t be trusted. Loki demonstrated his character’s growth to Loki fans in the series by choosing to rule, only not out of self-aggrandized glorious purpose, but rather out of fear of a multiverse of powerful Kang the Conqueror variants. Sylvie doesn’t see the subtlety behind Loki’s rationale, and accuses him of playing her to gain power. Sylvie can’t abide the Kang variant robbing innocent people of their free will as she was robbed of hers.

Sylvie sends Loki back to the TVA and takes her revenge on Kang as the branching begins to intensify exponentially. Once at the TVA, Loki rushes to find Mobius (Owen Wilson) and Hunter B-15 (Wunmi Mosaku) to warn of what he’s learned only to discover he’s in an alternate timeline born of Sylvie’s assassination. Mobius and Hunter B-15 have no idea who Loki is, and a giant statue of Kang stands ominously in the middle of the TVA.

The statue of Kanf signals a significant shift in the TVA and reality itself. It could mean that the warnings of He Who Remains have come to fruition, with a new Kang variant now leading the TVA. Or perhaps, as the Time-Keepers were purely symbolic — and literal — figureheads, Sylvie has ascended to the role once occupied by He Who Remains, using Kang’s visage as her proxy.

In a post-credits scene, Marvel reveals that Loki will return in season 2. It was likely all along that Loki would continue on beyond one season, but just when we can count on more Loki streaming on Disney+ is anybody’s guess for now. According to a report from THR, Tom Hiddleston will reprise his role of Loki opposite Elizabeth Olsen (Scarlet Witch) and Doctor Strange (Benedict Cumberbatch) in Doctor Strange in the Multiverse of Madness due out in 2022.

Marvel Studios released 20 films before they arrived at their climactic crossover event to wrap up the Infinity Saga with Avengers: Infinity War (2018) and Avengers: Endgame(2019). So there’s a lot that will happen between the Loki finale and whatever Endgame-style climax Marvel Studios is currently building towards. That said, is it possible that Marvel fans are witnessing the path being paved toward a Marvel Comics story arc called Secret Wars?

What is Secret Wars?

In Marvel Comics, there have been several crossover events to use the moniker Secret Wars. The first Secret Wars event, in 1984, introduced The Beyonder — a cosmic supervillain that was able to use his reality warping powers to transport heroes — like Spider-Man, Hulk, Fantastic Four, X-Men, and the Avengers — as well as villains — like Doctor Doom, and Kang the Conqueror — to a place called Battleworld. While the crossover event led to interesting teamings of Marvel characters and some memorable battles, the arc mainly existed to help sell Marvel action figures.

Marvel Comics printed a follow-up Secret Wars II in 1984-85, that featured the Beyonder coming to Earth. The version of Secret Wars we are mostly likely to see adapted into the Marvel Cinematic Universe is the 2015 storyline Secret Wars from writer, Jonathan Hickman. In this modernized telling of the Secret Wars mythos, alternate Earths within Marvel’s Multiverse were beginning to slip out of sync, causing parallel worlds to collide.

This led to a war between alternate timelines and universes — a Multiversal War — which was led by Earth-616’s brain trust the Illuminati. This re-telling includes elements from the original — like teaming of heroes and villains and the appearance of Battleworld — while telling a whole new story.

The Multiverse described by Jonathan Majors’ Kang variant in the Loki finale appears to have similar rules to the Multiverse depicted in Hickman’s 2015 Secret Wars — with character crossovers, nexus events, and variants causing the Multiverse to become unstable. That instability leads to chaos, and possibly the destruction of reality.

Related: Everything We Know About Marvel&’s ‘Fantastic Four’ Reboot

He Who Remains explains to Loki and Sylvie that any destabilization would reignite a Multiversal War. To adapt elements of Hickman’s Secret Wars would be a prime opportunity — and a logical one at that — to introduce new Marvel characters like the X-Men, and Fantastic Four.

What did you think of Jonathan Majors as the Sacred Timeline enforcing Kang variant? Let us know in the comments!

Comments Off on How ‘Loki’ Finale Gave Marvel Its Next ‘Endgame’