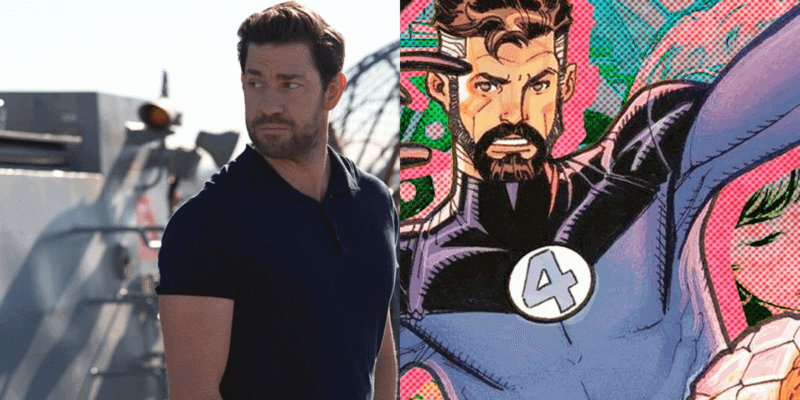 John Krasinski reflected on rumors and Marvel fan demand for his casting in a Fantastic Four reboot. While promoting his hotly anticipated new sequel, A Quiet Place 2 (2021), John Krasinski candidly spoke about his willingness to join the Marvel Cinematic Universe as Reed Richards — AKA Mr. Fantastic — in a new cinematic take on Marvel Comics’ first family, the Fantastic Four.

In an interview conducted in March 2020 with Uproxx that is only now being released in the run-up to the May 28 release date of A Quiet Place Part II (2021), Krasinski was asked about the headlines at the time that touted the rumor of his apparent interest in joining Marvel’s Fantastic Four cast. He frankly responded that he felt “stupid,” potentially attempting to leverage Marvel Studios and Marvel Studios boss Kevin Feige through the media. The actor shared,

“I actually felt stupid. I wanted to email Kevin Feige and be like, “Sorry, man. I wasn’t trying to like put pressure on you. You’re the man.”

Krasinski went on to divulge how he honestly felt about the opportunity to join the Marvel Cinematic Universe. And apparently, he feels pretty strongly about it — but never realized his desire to stretch his acting muscles as Mr. Fantastic would cause such a buzz among Marvel fans, saying,

“… And then you get older and you just go, ‘I don’t know, I’m going to be honest.’ And my honest answer was like, “Hell yeah. I’d play Mr. Fantastic.” And then people were like, “Oh my God.” And I didn’t know it would be headlines. I thought it would just be the eighth question in that interview. But it’s true.”

Fantastic Four has been confirmed to be in the works at Marvel Studios. In Marvel’s recent Phase 4 sizzle reel, the final Marvel Cinematic Universe property to be teased was the Fantastic Four logo. The project is so early on in development that no release date has been given, though 2023 (or even later) seems reasonable given the rest of Marvel’s impressive slate of releases. The only name officially attached to Marvel’s Fantastic Four reboot thus far is director Jon Watts. No official Fantastic Four cast has been confirmed as of this writing.

However, perhaps no actor’s name has been mentioned more in Fantastic Four cast rumors than John Krasinski. Ever since Disney officially acquired Fox and their Marvel Comics properties, Marvel Cinematic Universe fans have been “fancasting” John Krasinski and his wife Emily Blunt as Reed Richards and Sue Storm. Audiences loved the pairing of the husband and wife acting and producing team in the horror blockbuster A Quiet Place (2018), and quickly cast them as the MCU’s Mr. Fantastic and Invisible Woman in their collective head canon. With the heavily publicized release of A Quiet Place Part II (2021), the Fantastic Four casting rumors and questions remain as strong as ever.

Emily Blunt, well-known by Disney fans as the star of Mary Poppins Returns (2018) and set to bring an iconic Disney theme park attraction to life in the upcoming film Jungle Cruise (2021), has made it clear in recent interviews that she is not interested in taking on the role of Sue Richards / Invisible Woman or any superhero movie. When asked in recent interview on the Howard Stern Show about her potential involvement with the Marvel Cinematic Universe, Blunt noted that she’s circled the MCU several times and it just hasn’t worked out. The actress explained,

“It’s not that it’s beneath me. I love Iron Man and when I got offered Black Widow I was obsessed with Iron Man. I wanted to work with Robert Downey Jr.—it would’ve been amazing … but I don’t know if superhero movies are for me. They’re not up my alley. I don’t like them. I really don’t. It’s been exhausted. We are inundated—it’s not only all the movies, it’s the endless TV shows as well.”

John Krasinski is beloved as the uber-relatable Jim Halpert of the pandemic binge fodder series The Office and has displayed his action chops in Amazon Prime’s Jack Ryan series. Just because Blunt is uninterested in Fantastic Four, doesn’t necessarily rule out her husband from joining the cast. Marvel Studios will reportedly announce their Fantastic Four cast later in 2021, to see who will play not only Reed Richards and Sue Storm but also Johnny Storm — Human Torch — and Ben Grimm — The Thing.

20th Century Fox previously released Fantastic Four (2005) — starring Ioan Gruffudd as Mister Fantastic, Jessica Alba as the Invisible Woman, Chris Evans as Human Torch, and Michael Chiklis as The Thing, and Julian McMahon as Doctor Doom — and sequel Fantastic Four: Rise of the Silver Surfer (2007). The latter film did not perform as well as its predecessor, preventing any further sequels.

The studio attempted to revive the franchise in 2015 with Fantastic 4 — starring Miles Teller, Michael B. Jordan, Kate Mara, and Jamie Bell — but the film was a critical and commercial flop.

Fans believe in Marvel Studios and Marvel boss Kevin Feige to right the ship with the latest Fantastic Four cast.

Who is your dream Fantastic Four cast for the Marvel Cinematic Universe? Let us know in the comments!