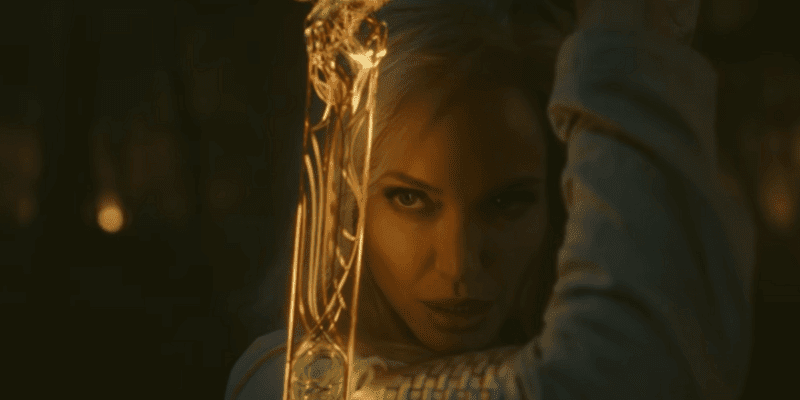 Marvel has announced their full slate of upcoming projects in the Marvel Cinematic Universe via a sweeping trailer narrated by the late Stan Lee. The video contains the first footage that Marvel Studios has released of their highly anticipated super team epic, Eternals (2021).

Eternals is helmed by Chloe Zhao, the Oscar-winning director of this season’s Best Picture honoree, Nomadland (2021). The ambitious film will adapt the Marvel Comics characters introduced by Jack Kirby chronicling an alien race of immortals living in secret on Earth, shaping the course of human history over millennia. The gorgeous first footage of the saga features Marvel fans’ first glimpse at the all-star cast of Eternals in action.

Marvel Studios’ full “celebrating the movies” trailer revealed tons of new footage and information encompassing Phase 4 of the Marvel Cinematic Universe.  This Phase 4 sizzle reel gave us a look at not only The Eternals, but also Shang-Chi: Legend of the Ten Rings (2021), and Black Widow (2021).

The trailer also acts as the official announcement of the titles of the Black Panther (2018) and Captain Marvel (2019) sequels. Black Panther: Wakanda Forever is due out July 8th, 2022. The Captain Marvel follow-up will be known as The Marvels and is set for release on November 11th, 2022. Marvel’s Eternals sneak peek starts rolling at the 2:20 mark.

“Marvel Studios’ The Eternals features an exciting new team of Super Heroes in the Marvel Cinematic Universe, ancient aliens who have been living on Earth in secret for thousands of years. Following the events of Avengers: Endgame, an unexpected tragedy forces them out of the shadows to reunite against mankind’s most ancient enemy, The Deviants.”

“What she talked about was really fighting for practical locations, for practical elements — yes, in a movie that is full of visual effects and characters with extraordinary powers, but doing as much as possible on far-flung locations. And that starts to reap benefits visually immediately.”

In the trailer, Marvel promises that Eternals will be “worth the wait.” Originally set to be released on November 6th, 2020 Eternals and the rest of the Marvel Cinematic Universe schedule faced numerous delays. The updated theatrical release date of Eternals is November 5, 2020.

What characters are you most excited to see in Eternals (2021)? Let us know in the comments!