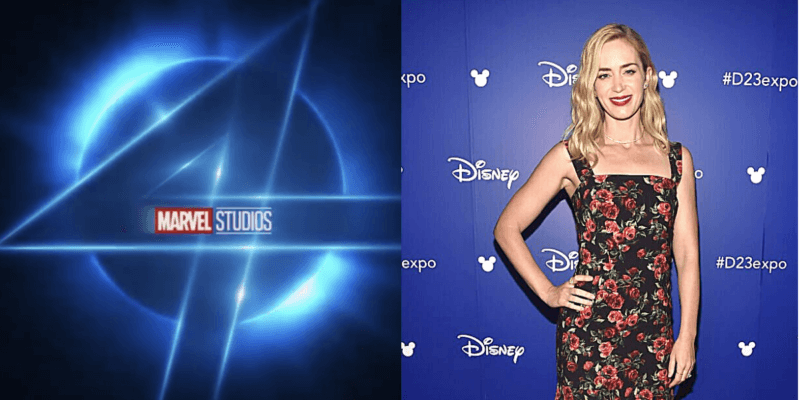 As anticipation for Marvel Studios reboot of the Fantastic Four franchise builds, rumors indicate that Marvel could announce the cast relatively soon. According to reports, Marvel is close to finalizing its top choices to bring Fantastic Four to the Marvel Cinematic Universe and could reveal the official cast by the end of the year.

Recently Marvel gave fans a big tease for the upcoming Fantastic Four movie in a Phase 4 sizzle reel which you can read more about here.

Here are the rumored actors being looked at to fill the roles of the Fantastic Four film.

Actors Emily Blunt and John Krasinski have long been at the top of the Fantastic Four reboot call sheet for Marvel fancasts circulating on social media. Ever since Disney acquired Fox, along with the rights to their Marvel properties like Fantastic Four and X-Men, fans have called for the husband and wife team, who successfully teamed on the sneaky horror hit A Quiet Place (2018), to take the lead on Marvel’s first family as Sue Storm and Reed Richards.

Now according to new rumors — unconfirmed as of this writing — Marvel has identified their top choices and will announce the Marvel Cinematic Universe Fantastic Four cast by the end of 2021. Per geekosity, Marvel has been relentlessly pursuing Emily Blunt for the role of Sue Storm, the Invisible Woman. The same rumors go on to detail that Marvel Studios may have even made an official offer to John Krasinski for the role of Reed Richards, Mister Fantastic.

Marvel Studios president Kevin Feige had previously announced the Marvel Cinematic Universe reboot of Fantastic Four as a project that would be helmed by Spider-Man: Homecoming (2017) and Spider-Man: Far From Home (2019) director Jon Watts. Watts is currently in production on Spider-Man: No Way Home (2021). With his Spider-Man experience of successfully marrying Sony’s property into the Marvel Cinematic Universe, and introducing Peter Parker to Iron Man and the Avengers, Watts would appear to be the perfect choice to shepherd Fantastic Four into MCU’s continuity.

While John Krasinki (The Office, Jack Ryan) and Emily Blunt (The Devil Wears Prada, Mary Poppins Returns) have long been considered the front-runners to lead a new Fantastic Four movie, Marvel Studios hasn’t made any official announcements. At this point, it’s anybody’s guess who Marvel may be considering for the roles of Ben Grimm — The Thing — or Johnny Storm — The Human Torch. According to these latest rumors, however, Marvel fans will know sooner rather than later.

20th Century Fox released the moderately successful Fantastic Four in 2005 and sequel Fantastic Four: Rise of the Silver Surfer in 2007. The studio attempted to reboot the franchise in 2015 with Fantastic 4, but the film was a critical and commercial disappointment.

Who do you think Marvel Studios should cast in the Fantastic Four Reboot? Show us your ultimate “fancast” in the comments!