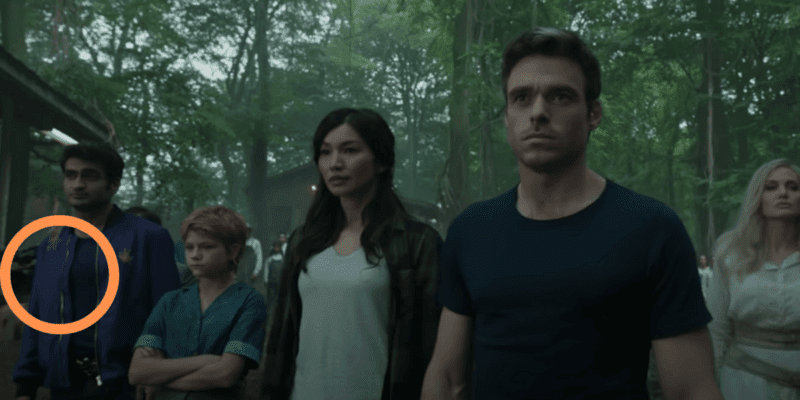 Marvel fans spotted a camera guy in the margins of the new Eternals (2021) footage released in today’s bombshell Phase 4 sizzle reel. Was this a huge mistake that Marvel’s editors missed, or is that camera guy supposed to be in the shot?

The Eternals footage in question (starting at the 2:20 mark in the trailer) is the very first video released by Marvel Studios of the sprawling Marvel Cinematic Universe saga that introduces a race of god-like aliens that have shaped the civilizations of Earth for thousands of years. Fans noticed a cameraman just over the broad shoulders of actor Kumail Nanjiani and took to social media to report the error right away.

Is this another instance of a high-profile property failing to catch a wandering film crewmember or out-of-place coffee cup, or is the cameraman in the scene intentionally? View a still of the scene below and judge for yourself. 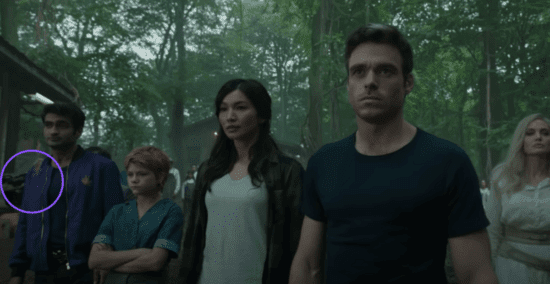 One fan, Kevaan, took to Twitter to comment on his observations of the possible Marvel Cinematic Universe blunder, saying,

Eternals looks cool from what little we got in that Marvel trailer. Although in one of the shots I noticed a camera in the background and idk if it was intentional or not

Eternals looks cool from what little we got in that Marvel trailer.

Comes out 2 days after my birthday so that's cool ig pic.twitter.com/7VKKx59JsS

Catalina let her emojis do the laughing, as she perceived a major blunder by Marvel Studios, Tweeting,

#MarvelStudios
i'm living for the camera man in the eternals trailer ??? pic.twitter.com/oloZylO0KT

Hey @MarvelStudios, might want to edit out the cameraman on the far left in the final version. #TheEternals #Eternals

Hey @MarvelStudios, might want to edit out the cameraman on the far left in the final version. #TheEternals #Eternals pic.twitter.com/pYkGEZdqDa

Another Marvel movie fan also had a sarcastic question, but it turns out they may be on to something:

Is the cameraman on the left part of the eternals group lol https://t.co/5JW5RwjST0

Well, as it turns out — yes… kind of. A cameraman running around with the Eternals does have some basis in Jack Kirby’s original Marvel Comics.

In Marvel’s Eternals, Kumail Nanjiani plays an Eternal named Kingo. Kingo, in the comics, is a master swordsman and martial artist who uses his cosmic powers to earn himself movie stardom on Earth as an action movie celebrity in Japan. In Jack Kirby’s comics, Kingo was often followed by a cameraman or film crew during his exploits. Given Nanjiani’s penchant for humor, it’s somehow not difficult to imagine him playing a super-powered smug celebrity who requires a cameraman to capture his every move.

Kumail Nanjiani talked about his character’s attention-seeking personality in an interview on the New Hollywood podcast, revealing,

Did you really think that Eternals director Chloe Zhao — the Oscar-winning helmer of this season’s Best Picture winner, Nomadland (2021) —  and Marvel Studios Head Kevin Feige would let a blunder this massive slip past her the day Eternals footage finally released? Marvel Cinematic Universe Audiences will find out when Eternals hits theaters November 5, 2021.

“Marvel Studios’ The Eternals features an exciting new team of Super Heroes in the Marvel Cinematic Universe, ancient aliens who have been living on Earth in secret for thousands of years. Following the events of Avengers: Endgame, an unexpected tragedy forces them out of the shadows to reunite against mankind’s most ancient enemy, The Deviants.”

What do you think? Did Marvel mess up? Or is this camera guy in on the action? Let us know in the comments!