Disney+ Changes Hint at MCU Timeline Shakeup - Inside the Magic 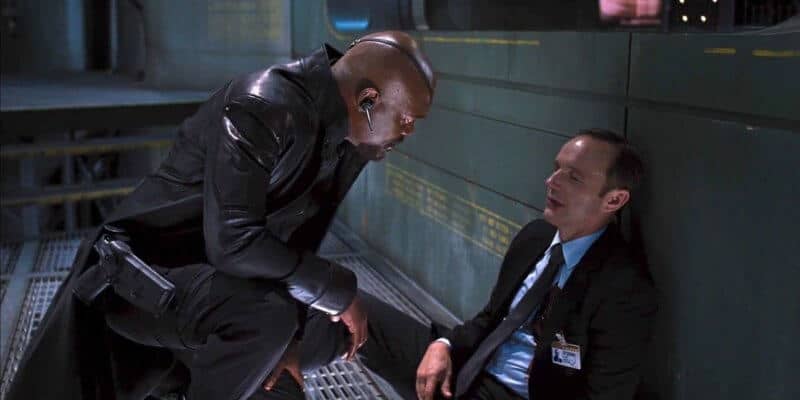 Marvel Studios has been setting records with its Disney+ original series like WandaVision and The Falcon and the Winter Soldier and the anticipation for some of its upcoming shows is building. This has some Marvel fans looking back at some older Marvel series – namely Marvel’s Agents of SHIELD — and wondering where they fit into the MCU now.

And a recent change to Disney+ may have finally given them their answer.

Loki is coming to Disney+ in just over a month on June 11, 2021, and with all the latest trailers expectations are high for the Kevin Feige-led studio’s third television show set in the Marvel Cinematic Universe. But MCU fans already have an idea of the time travel shenanigans that the God of Mischief (Tom Hiddleston) will be getting up to in his show.

So many of the online theories have been focusing on Secret Invasion. The show starring Samuel L. Jackson as Nick Fury is set to be a mind-twisting thriller full of shape-shifter Skrulls like Ben Mendelsohn’s Talos, first seen in Captain Marvel (2019).

Secret Invasion will be based on a critical acclaimed Marvel Comic storyline of the same name that Marvel’s official described as:

“While in the grips of paranoia, Earth’s mightiest heroes have to band together to fight off an armada of Skrull ships carrying an army of super-charged alien warriors! Traitors are exposed and lives are lost as the shape-shifting zealots lay claim to the planet, and only by compromising their ideals do the heroes stand a chance!”

One of the major rumors for the series is that it could finally return the characters from the Agents of SHIELD to the canon of the MCU. While the show began seemingly in the same Marvel Universe as the rest of the Marvel Cinematic Universe, it diverged into an alternate timeline and putting its place in the MCU in jeopardy. But after seven seasons with these characters, fans are reluctant to let them go.

Kevin Feige threw gas on the flames when, back in February, he was asked about these characters potential return, and he has this to say:

However, a recent update to the Disney+ interface in international markets like Brazil, first reported by TheDirect, shows that Agents of SHIELD has been moved to the “Marvel Legacy Movies and Series” alongside other non-official MCU properties like Fox’s X-Men and Fantastic Four franchises. The Disney+ Brazil screenshot below shows this.

Related: Imminent Casting Could Shake the Foundation of the MCU

You cannot see the category here in the United States since Agents of SHIELD is currently only available on Netflix with the shows from Netflix’s Defender series, which also exists in a sort of canon limbo. Though Daredevil’s Charlie Cox is rumored to appear in Spider-Man: No Way Home (December 17, 2021) as Matt Murdock AKA Daredevil.

Fans desperately want the return of the so-called “DefenderVerse” and the actors who played the critically acclaimed characters like Mike Colter’s Luke Cage and Kristen Ritter’s Jessica Jones – but maybe not Finn Jones’s Danny Rand/ Iron Fist. Though the Netflix Marvel TV series were careful to limit references to the main Marvel continuity Jessica Jones’s villain Trish Walker AKA Hellcat (Rachael Taylor) could be hanging out on the Raft with Baron Zemo (David Brühl).

It could be a way to distinguish between what has been produced by Marvel Studios and Marvel Television Studios with ABC. Agent Carter has been put in the same category and there is not much in that short-lived series that conflicts with MCU canon, unlike Hulu’s Runaways, which had a different version of the Darkhold that sits in opposition to what fans saw in WandaVision.

Agent Carter only lasted two seasons but was left open-ended. It followed Agent Peggy Carter (Hayley Atwell) as she continued the battle against Hydra. Hayley Atwell and James D’Arcy, who played Jarvis in the Marvel TV series both returned to the Marvel Cinematic Universe in Avengers: Endgame (2019) and that hinted that Agent Carter was still canon. And her great-niece Sharon Carter (Emily VanCamp) just made waves on The Falcon and the Winter Soldier.

But it could also be a bigger sign that Marvel Studios is preparing to streamline the MCU timeline before introducing Marvel fans to new timelines and other universes in Doctor Strange and the Multiverse of Madness (March 25, 2022). Disney went through the same process with Star Wars not too long ago and Phase 4 of Marvel movies is set to expand the Marvel universe into a whole new realm and explore different versions of characters.

It may be the time for Marvel Studios to do what Star Wars did, and they could take the opportunity to fill in some plot holes. If Marvel is steering the next two Phases towards a potential Secret Wars climax on the level of Avengers: Infinity War (2018), it would even give them a chance to bring back characters like Black Widow/Natasha Romanoff (Scarlett Johanson). Though they could do that as soon as Loki (July 9, 2011), where some fans spotted a character that looked like Black Widow sitting beside Thor’s brother.

The upcoming Disney+ original series What If…? will be MCU fans their first taste of something Marvel Comics fans have experienced for a long time. Comic books often have limited runs that explore alternate versions of characters. And the MCU could use this idea to ignore some of the content that it had less authority over like the Sony Spider-Man franchise or Universal Studios’ Hulk films.

But could Marvel have relegated Agents of SHIELD to the likes of The Inhumans?

Taking Agents of SHIELD out of canon seems to lend credence to the theory that has been seen online that Emilia Clarke’s (Game of Thrones) mysterious role in Secret Invasion will be a recast version of Daisy Johnson AKA Quake (Chloe Bennet). Quake was a main character in Agents of SHIELD though her comic book origin was adapted as an Inhuman because at the time Marvel did not have the rights to the X-Men or other mutants.

The theory that Clarke might be Quake gained some steam after Fandomwire leaked that Quake was set for a return to the MCU, and many interpreted that as meaning that Chloe Bennet would reprise her role. But now that it seems like Disney is making moves to shuffle Agents of SHIELD into an alternate timeline that might be the case anymore.

Other mysterious roles for Secret Invasion are Kingsley Ben-Adir (One Night in Miami) as the series’ main villain and Olivia Colman (The Crown). But it would be truly sad to have Nick Fury without his trusted Agent Phil Coulson (Clark Gregg) by his side in Secret Invasion.

The ABC series finale left Agent Coulson – now a robot called a Life Model Decoy (LMD) – leaving SHIELD to explore the new timeline that the team found themselves in. It seemed like a good cap to his story arc, but there is always a way to bring Agent Coulson back into Marvel continuity.

Fans loved Agent Coulson from the moment that they first met him in Iron Man (2008) and he served as a fan surrogate in Avengers (2012), idolizing Captain America before his death at the hands of Loki. That is the moment that brought the Avengers together and earned him a place in our hearts forever.

Let us know if you would be disappointed if Agents of SHIELD was officially no longer canon.

Comments Off on Disney+ Changes Hint at MCU Timeline Shakeup