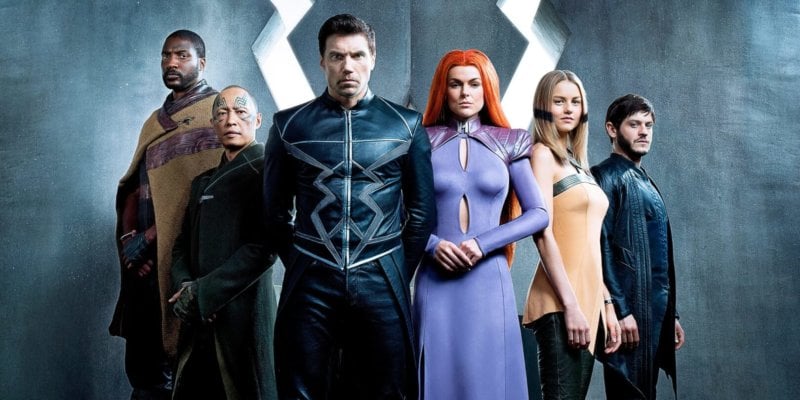 If you have only ever watched the Marvel movies, you might not have any idea who the Inhumans are. You may have seen the Inhumans pop up in your news feed because some internet theorists thought they would show up in the Disney+ original series The Falcon and the Winter Soldier.

It’s clear they won’t be coming back alongside stars Anthony Mackie (Sam Wilson/ Falcon) and Sebastian Stan (Winter Soldier). But, they will most likely come back around when Ms. Marvel premiers in late 2021 since Ms. Marvel/ Kamala Khan (Iman Vellani) is one of the most popular Inhuman characters.

So, if you’re curious about the Inhumans — or, just want to catch up on some parts of the MCU you might have missed — please enjoy this guide to one of the strangest groups in the Marvel Universe.

Differences between Marvel’s Inhumans and Mutants

It’s hard to mention the Inhumans without mentioning mutants. The X-Men and the rest of the mutants have always been the flagship line for Marvel Comics; they are as popular on the own as the rest of the Marvel characters combined.

Mutants and Inhuman share a lot in common, in both groups their abilities come from their DNA, and they develop powers usually around puberty. Both Inhumans and mutants have a wide range of weird powers. A mutant named No-Girl is a brain in a jar that can possess other people and Eldrac is an Inhuman who became a literal door after gaining his powers.

One of the biggest differences between Inhumans and mutants is that mutants get their power from the X-gene and can develop powers at any time though it usually triggered by stress or an emotional situation. If you’ve ever seen any of 20th Century Fox’s legacy X-Men films just think about how Rogue (Anna Paquin) got her powers after kissing her boyfriend for the first time.

Meanwhile, Inhumans are the result of experimentation by aliens known as the Kree – those blue guys from Guardians of the Galaxy and Captain Marvel. An Inhuman can only gain powers after going through a process known as Terrigenesis.

What is Terrigenesis, you ask? The process is like how a caterpillar becomes a butterfly. The Kree created Terrigen Crystals to control when Inhumans would attain their abilities. When broken these crystals release a mist which activates the Inhuman genes and envelope the Inhuman in a cocoon while they are transformed.

Related: Marvel Sets Up X-Men In ‘Falcon and the Winter Soldier’.

Despite their similarities, in Marvel Comics Inhumans and mutants hate each other. While the X-Men and other mutants were dealing with humans hating and attacking them, the Inhumans moved to a secret base on the Moon where humans could never find them.

The two groups have come to blows multiple times in the comic books. One major event was when a cloud of Terrigen Gas was released on earth, it killed many mutants and made others powerless or even sterile. As there was little Terrigen left, the gas represented the last chance for there to ever be more Inhumans while posing a genocidal threat to the mutants.

History of the Inhumans

The Inhumans first appeared in Fantastic Four #45 back in 1965. As their backstory was expanded, it was revealed that Inhumans were all descended from those who were experimented on by the Kree.

During the Kree-Skrull War, which was mentioned in Captain Marvel (2019), the Kree wanted to develop powered individuals to help fight the war. They chose to experiment on the humans from Earth because they had already been exposed to cosmic beings known as Celestials.

It’s worth keeping the Celestials in your head as well since the upcoming Marvel Cinematic Universe film Eternals (November 5, 2021) will focus on a group of Celestials.

However, the project was halted when the Kree learned of a prophecy that an Inhuman might one day kill the Kree Supreme Intelligence. The remaining Inhumans formed their own society in a city on the Moon called Attilan.

They discovered they could create more Inhumans using the Terrigen Crystals. But when they allowed widespread use of Terrigen, they found that it damaged the genes of those who went through Terrigenesis and so it became restricted for use by “perfect” individuals as a metaphor for eugenics.

This evolved into a rigid caste system ruled by their royal family. Black Bolt is the king of the Inhumans, whose voice is powerful enough to level a mountain, so he typically remains silent. His wife, Medusa, has living hair.

When the Terrigen Bomb released the cloud of Terrigen mist on the Earth there were suddenly hundreds of new Inhumans that were not under the Royal Family’s control, including Ms. Marvel/ Kamala Khan.

After the resulting conflict with the mutants, Medusa’s sister Crystal fell in love with Pietro Maximoff/Quicksilver. Together they had a daughter named Luna who was originally expected to be half mutant/half inhuman called an “Inmutant”. The two sides of her genetics seemed to cancel each other leaving her powerless, but she was later retconned to be an Inhuman with the ability to sense, remove, and alter the emotions of others at will.

Inhumans in the Marvel Cinematic Universe

Well, it’s time to talk about the elephant in the room. Marvel did produce a live-action television show for ABC back in 2017. Inhumans did officially take place in the MCU but most fans (and probably Marvel boss Kevin Feige) would really like to forget it ever happened.

It’s bad. Like really bad. I cannot in good conscience recommend watching it, even though it is available on Disney+ if you feel the need. How bad is it? The average Rotten Tomatoes score for the series is a horrifying but well-deserved 11%.

The flaws are countless, but the production was doomed from the start. Back in 2014, Marvel Studios announced they were going to make an Inhumans movie during Phase 3, but it never happened. It was eventually reimagined as this unfortunate Marvel television series.

Related: New Marvel Star: “Wait ‘Til You See My Powers“

Since the production was co-financed by IMAX, the first two episodes were shot in IMAX and released in theaters, but it had a dismal box office turnout, in part because fans knew it would come to ABC a few weeks later for free — and with an extra nine minutes of content.

Many have pointed out the money wasted on shooting and releasing the pilot for a theater audience could have been better spent on special effects. The remaining budget for the series was so limited that the majority of it had to be set in Hawaii and to avoid animating Medusa’s hair they had her shaved at the end of the first episode, angering fans.

In the Inhuman comics, Medusa is a force to be reckoned with, but in the series, Medusa (played by Serinda Swan), does not have much to do but wander around Oahu aimlessly along with the rest of the Inhuman Royal Family.

Another strange choice made during the filming was to create an entirely new version of sign language for Black Bolt (Anson Mount). The show’s creator Scott Buck wanted to make the show feel inclusive, but since he borrowed signs from American Sign Language (ASL) out of context it divided fans on whether it was appropriate.

It’s worth mentioning that Scott Buck also worked on Netflix’s Iron Fist — another Marvel series that fans did not particularly enjoy.

One of the few saving graces of the show is Iwan Rheon (Ramsay Bolton from HBO’s Game of Thrones) as Maximus the Mad. In the comics, Maximus is a major enemy of the Inhumans with a wide arrange of telepathic abilities including mind control and increased intelligence. In Inhumans, Maximus is the only powerless individual in the Royal Family.

After going through a failed Terrigenesis, Maximus realizes the structure of Inhuman society is unfair and tries to overthrow his brother, Black Bolt. While normally having a villain with a logical reason behind their motives is something that a lot of MCU moves lack, this show goes too far in this direction as the heroes seem to be actively wrong to try to keep the oppressive caste system in place.

The problem is exacerbated by the fact that the show does nothing to expand on the rest of the members of the Royal Family beyond telling us what their powers are. Karnak (Ken Leung), Crystal (Isabelle Cornish), and Gorgon (Eme Ikwuakor) are giving little to do through the eight-episode series. And poor Triton (Mike Moh) appears so briefly that it’s forgettable.

Where else have the Inhumans shown up in the MCU

Luckily for fans of the Inhumans from the comics, there has already been second shot of seeing them in live-action. Marvel Studios wanted to make the Inhumans work in the Marvel Cinematic Universe since at the time it seemed unlikely that they would ever regain the rights to the X-Men and the rest of the mutants.

One of the main characters of the series, Skye (Chloe Bennet) was revealed to be an Inhuman. She was the retconned as the comic book character Quake/ Daisy Johnson. In the comics, Quake was a mutant but as an Agent of SHIELD Marvel Studios still had the rights to the character – similar to how they had the rights for Wanda Maximoff/ Scarlet Witch (Elizabeth Olsen) and Pietro Maximoff/ Quicksilver (Aaron Taylor-Johnson) since they were also in Avengers comics.

The Inhuman arc on Agents of SHIELD was well-received and went on to shape the rest of the series. They kept the Kree experiment backstory but spent a lot more time delving into the history of the Inhumans in the Marvel universe and went on to bring many fan-favorite Inhuman characters.

Since Agents of SHIELD went off the air, fans have been begging for the cast to return to the MCU. Especially since now, SHIELD exists in a sort of canon limbo, with the last few seasons possibly taking place in an alternate timeline. The best option for their return is Secret Invasion.

Could the Inhumans show up again?

Now that Marvel has the rights to the X-Men again the fate of the Inhumans in the MCU has become uncertain. The original intent was to have the Inhumans fill the void in the Marvel universe left by the mutants. And while most fans agree Inhumans is best left in the back of a long box, they do not want to see the Inhumans gone forever.

Many speculated they might show up in The Falcon and the Winter Soldier when early plot leaks revolved around a virus and powered villains. However, it does appear the virus storyline was ultimately scrapped when the real-world pandemic put a halt on the MCU — though there are still some remnants of this idea hidden in the show.

Related: Internet Breaks Down After THAT ‘Falcon and the Winter Soldier’ Cameo

Back in 2103, Marvel Comics started to shift focus to the Inhumans and after the events of the Terrigen Bomb, they introduced many new Inhuman characters – namely Kamala Khan aka Ms. Marvel. She was the first Muslim superhero to lead her own comic book series and comic book fans love her.

Kamala Khan’s Inhuman heritage is a central part of her character. Fans have been speculating that Marvel Studios plans to retcon her as a mutant but that remains unclear. It would be a shame to squander the opportunity to introduce the Inhumans on a platform as big as Disney+.

Let us know in the comments if you made it through Marvel’s Inhumans or skipped it entirely.

Comments Off on Who Are Marvel’s Inhumans?