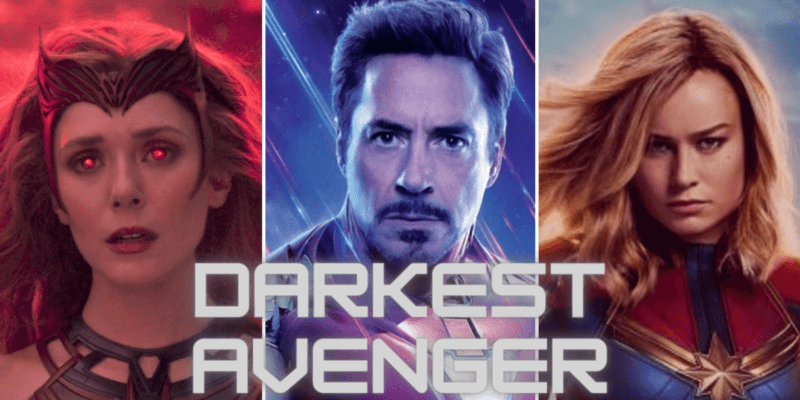 Ever since Thor: Ragnarok (2017), Marvel fans have debated who is the strongest Avenger. Whether it is Thor, Hulk, Captain Marvel, or Scarlet Witch may never be fully settled. However, there is another question —  who is the darkest Avenger?

Marvel Comics are full of some dark and twisted storylines. Even darker than Thanos (Josh Brolin) wiping out half the universe in Avengers: Endgame (2019). Many of Earth’s mightiest heroes have spent time as villains. Could the MCU have one of their heroes turn to the dark side?

Captain Marvel can be a bit bloodthirsty

Carol Danvers AKA Captain Marvel (Brie Larson) might be one of the most powerful characters in the Marvel Cinematic Universe but in the comics, she’s had a bit of a rough road.

Back when she was still going by Ms. Marvel, she was attacked by the mutant Rogue. She was left in a coma for some time and when she awoke she could not remember who she was. While Professor X helped her regain her memories for a long time she felt no emotional attachment to her past.

Her feud with Rogue led her to try to kill her fellow Avenger on multiple occasions. In Kelly Thompson’s 2020 run on the Captain Marvel comic – The Last Avenger story arc had Danvers killing other avengers one at a time. She was ultimately revealed to be faking their deaths.

For a long time in the comics, Captain Marvel was an alcoholic. Tony Stark helped her recover, but in the comic book Civil War II, she punched Iron Man into a coma.  Recently, ScreenRant pointed out that Captain Marvel is quick to jump to the most violent option. They noted:

“Carol is known for crossing the line without a second thought in order to stop her enemies. Readers have seen her fly a Skrull into space just to watch him suffocate to death, and she admitted she enjoyed it.”

Carol Danvers has joked in the comics that the darkest option might be the most efficient. She’s more than willing to get the job done, even if it means getting her hands dirty.

WandaVision gave MCU fans a small taste of Wanda Maximoff (Elizabeth Olsen) AKA Scarlet Witch’s ability to control people around her. The first Marvel original series on Disney+ found Wanda and Vision (Paul Bettany) trapped in a reality that Wanda made based on classic television sitcoms.

While the citizens of Westview were rightfully angered by how Wanda was controlling them to act out her fantasy. This is pulled from the House of M comic written by Brian Michael Bendis. In House of M, Wanda did something similar – only she changed the entire world and not just a single town.

Wanda might have the biggest body count when it comes to killing her fellow Avengers. She almost wiped out all mutant life in the Marvel Universe with the infamous sentence “No More Mutants”. And, in Avengers: Dissembled she killed Hawkeye/Clint Barton, who was in love with her.

Iron Man is responsible for most MCU villains

Tony Stark AKA Iron Man (Robert Downey Jr.) is the linchpin of the Marvel Cinematic Universe. It seems that time and time again all events somehow lead back to him. His bomb radicalized Wanda and her twin brother Pietro AKA Quicksilver (Aaron Taylor Johnson).

Even when he tries to do the right thing, Tony always seems to create new problems. His Damage Control program was the motivation for Adrian Toomes (Michael Keaton) to become the Vulture in Spider-Man: Homecoming (2017).

In the comics, Iron Man has been evil multiple times. Most recently in the Superior Iron Man comic, where he offered people immortality but at a terrible cost. He also went overboard in the Armor Wars comic to try to reclaim his technology – a story that is being adapted in an upcoming Disney+ series.

Not to mention Iron Man got Captain America/ Steve Rogers killed in the original Civil War comic. Luckily the movie did not take it that far. In the same story, Iron Man convinced Peter Parker to reveal himself as Spider-Man, which ruined his life.

In the MCU, Tony was responsible for creating Ultron. Ultron took on the darkest part of Tony and Bruce Banner’s personalities and attacked Sokovia. This whole event led to Captain America: Civil War (2016) and the dissembling of the Avengers.

Like Carol, Tony also struggled with alcoholism, which was referenced in Iron Man 2 (2010). And while Iron Man died in Avengers: Endgame (2019), the consequences of his actions could linger throughout the rest of the MCU for years to come.

Black Widow had a lot of red in her ledger

Natasha Romanoff AKA Black Widow (Scarlett Johansson) has spent the majority of her time in the MCU trying to account for all the bad things in her past. Much of it is a mystery and will hopefully be expanded in the long-delayed Black Widow film, now dropping July 9, 2021.

Maybe fans will finally get to learn what happened in Bucharest. In the comics, Natasha frequently takes on missions for the Red Room — the organization that brainwashed her into becoming a spy. And as an assassin, she continued to take missions to kill people, some innocent.

Related: Did Disney Leak a Big Announcement for ‘Black Widow’

While Natasha ultimately redeemed herself in Endgame, her comic counter-part often returns to her villainous roots. She killed Jarvis as well as Hawkeye’s family in one storyline, for example.

All in all, many Avengers either started as criminals or became criminals at one point in time. They have all killed people — they have even killed each other. There have even been entire teams of evil Avengers including the Thunderbolts and the Dark Avengers. There may be never a definitive answer to who is the darkest Avenger, but all of these iconic Marvel characters are excellent candidates.

Let us know in the comments below who you think is the Darkest Avenger.