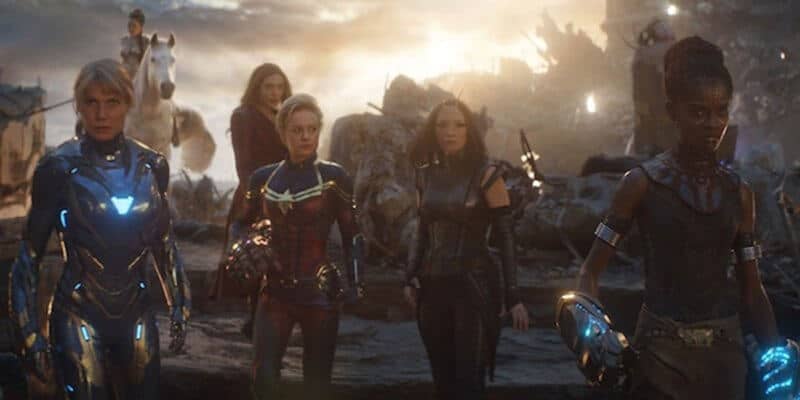 Captain Marvel star Brie Larson (Carol Danvers/ Captain Marvel) certainly knows how to give Marvel fans what they want. Her friendship with fellow Marvel Cinematic Universe alumna Tessa Thompson, Valkyrie from Thor: Ragnarok (2017), has made them fan favorites both on and off-screen.

Marvel fans have been clamoring for Larson and Thompson to team-up ever since they first shared a scene in Avengers: Endgame (2019). Though the moment was brief, they joined forces to get the Infinity Gauntlet away from Thanos during the chaotic battle for the universe, it inspired plenty of requests for more time with the two characters.

Now Brie Larson is giving hope to all those asking for her and Tessa Thompson to work together. In a recent tweet, she told fans “[they’re] cooking something up.”

We’re cooking something up… ? https://t.co/8agkqZWcS7

While this is in no way a confirmation of any Marvel Cinematic Universe team-up in fans’ future, the hype train has already left the station. What could this possible project be? And, can we all hope for it to be in the MCU and not just an appearance on Larson’s YouTube channel (as Comicbook.com has guessed)?

Could Tessa Thompson Show Up in Captain Marvel 2?

Brie Larson is set to reprise her role as Captain Marvel in the Captain Marvel sequel, which is set to come out in November 2022. She will be joined by both Teyonah Parris (Monica Rambeau from WandaVision) and Ms. Marvel lead Iman Vellani (Kamala Khan).

Related: Brie Larson and her Endgame co-stars are lobbying for an all-female Marvel movie

After the all-female moment in Endgame, rumors circled that an A-Force movie could be in the works for the MCU. A-Force is an all-women team that Captain Marvel worked with for some time in the comics.

However, with the next few phases of the Marvel Cinematic Universe well planned out, there does not seem to be an opening for such a film. Perhaps with the slate of powerful women already set to join Captain Marvel 2, Thompson’s Valkyrie could show up at some point and make it a sort of mini A-Force movie. The sequel will be directed by Nia DaCosta, who previously worked with Thompson on Little Woods.

Thompson herself has been vocal about wanting to be part of an all-female Marvel movie. In an interview with CBR.com back in 2017 she revealed that she had been part of a pitch for such a film to Kevin Feige:

“I think in that group was Brie Larson, myself, Zoe Saldana[…] Scarlett Johansson. Pom [Klementieff] and Karen [Gillan], who are both in the Guardians movies. Yeah, I think it was that group. We were just sort of all in a semicircle talking, and it just came up, because none of us really worked together – well, I suppose Zoe, and Karen, and Pom – and wouldn’t it be nice if we could all work together?”

“And we were sort of speculating on the ways in which it might happen in Infinity War, or might not happen. And we thought, ‘No, we should just have a whole movie where we know every day we’re going to arrive and get to work together.’ So we just ran right up to Kevin Feige and started talking about it.”

Related: Is an All-Female Superhero Movie Coming From Marvel?

Could Brie Larson Show Up In Thor: Love and Thunder?

Tessa Thompson is already scheduled to return as the powerful Asgardian, Valkyrie, in the fourth Thor movie.  Thor: Love and Thunder will feature even more powerful women. The majority of the cast of the Guardians of the Galaxy, including female characters Nebula (Karen Gillan) and Mantis (Pom Klementieff) who were both involved in the A-Force pitch to Marvel Studio’s President Kevin Feige.

The timing of Larson’s Tweet combined with the fact that Thor is currently filming gives a lot of credence to fan theories that Captain Marvel might show up.

When the MCU last saw Captain Marvel it was not clear where she was headed. Captain Marvel may or may not be the strongest Avenger, but as a female superhero with incredible power, it seems like she could go back out to protect the cosmos, and she could easily bump into Thor and the Guardians crew.

It was also confirmed that Jane Foster (Natalie Portman) will feature heavily in Thor: Love and Thunder and pull inspiration from the “Mighty Thor” (2015) comic book, in which Jane has cancer but gains the power of Thor. This means Thor will seemingly make his way back to Earth at some point in the film.

Something worth noting is that while Thor director Taika Waititi is big a fan of representing Valkyrie as LGBT, as she is in the comics, he has said before that just because fans have been shipping Valkyrie/Captain Marvel online, doesn’t mean it needs to be included in the films. So, all those fans holding out hope that Carol Danvers will become Queen of Asgard, Love and Thunder probably will not be where it happens.

Personally, I’d just be happy seeing Thomson and Larson do anything together even if it’s not in the MCU. But if I get more Valkyrie or Captain Marvel that is just icing on the cake. Let us know in the comments below what your ideal Larson/Thompson team-up would be.