Marvel stars want a love triangle between Thor, Captain Marvel, and Valkyrie in an MCU spinoff film - Inside the Magic 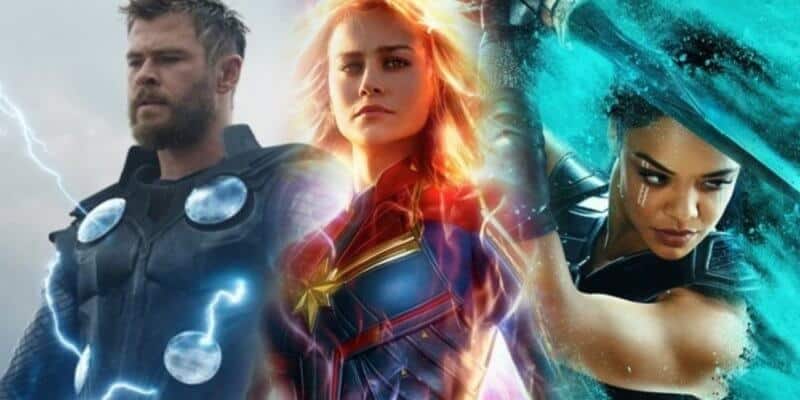 If you’re anything like us, you haven’t been able to stop thinking about the future of the Marvel Cinematic Universe ever since “Avengers: Endgame” hit theaters back in April. Well, we’re not the only ones who have been fantasizing about what’s going to happen to our favorite heroes. Chris Hemsworth and Tessa Thompson have another idea for their MCU characters, and it involves a pretty interesting love triangle between none other than Thor, Valkyrie, and Captain Marvel.

Hemsworth (Thor) and Thompson (Valkyrie) were recently reunited for an interview with MTV about their upcoming film together, “MIB International,” which hits theaters next week. But given the hype surrounding the MCU, it was only natural for the costars to chat about their super hero characters. MTV asked the actors what their buddy spinoff Marvel film would be if they were given the chance to make one. But Thompson already had an idea up her sleeve: her series would have to include Brie Larson as Captain Marvel. Here’s how the conversation went down:

Thompson: A rom-com, like we both try to fix each other’s love lives. Everyone knows who I’m dating.

Hemsworth: Who are you dating?

Thompson: Shipping. I’m being shipped with–

Hemsworth: Captain Marvel. I thought Thor was being shipped with–

Thompson: With Captain Marvel? That’s why I’m saying let’s make a love triangle movie! Let’s make an MCU, oh my gosh, let’s make an MCU like thriller. You know those old like 90s who’s going to be with who. It could be light. Just a rom-com about like the three of us.

Hemsworth: Or like “The Hand That Rocks The Cradle.”

So if Thompson’s idea of an MCU love triangle between Thor, Valkyrie, and Captain Marvel is ever brought to life, we could get to see Marvel’s first-ever romantic comedy thriller film on the big screen. So many of us love Marvel films that have everything we could ever want in a movie: great characters, comedy, a whole lot of action, friendship, and a hint of romance. And from what we saw of Thor and Captain Marvel’s dynamic and (how awesome Valkyrie truly is as a character) in “Avengers: Endgame,” it would definitely be interesting to see these three heroes involved in their love triangle. We’re totally on board with this. How about it, Marvel Studios?

What do you think of a possible MCU spinoff involving a love triangle between Thor, Captain Marvel, and Valkyrie? Let us know in the comments!

Comments Off on Marvel stars want a love triangle between Thor, Captain Marvel, and Valkyrie in an MCU spinoff film