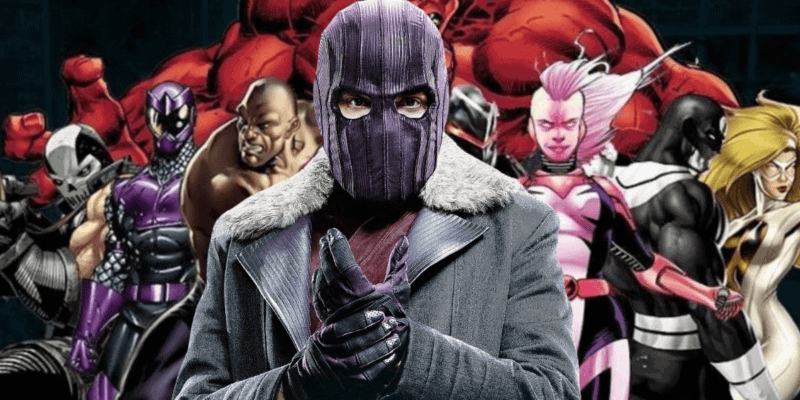 The entire first season of The Falcon and the Winter Soldier is now available to stream on Disney+. The second original series from the Marvel Cinematic Universe is breaking records and has quickly become the most successful TV series on the streaming service – even surpassing the beloved The Mandalorian and its predecessor WandaVision, according to Disney.

The new series from Marvel Studios follows Sam Wilson (Anthony Mackie) AKA Falcon and Bucky Barnes (Sebastian Stan) AKA The Winter Soldier on a global adventure full of intrigue, political commentary, and the bromance between the two leads. Written by Malcolm Spellman and directed by Kari Skogland, this show explores Captain America’s legacy after Avengers: Infinity War (2018).

It also brought back Sharon Carter (Emily VanCamp) AKA Agent 13, who has not been seen since Captain America: Civil War (2016). She has been on the run since she helped Steve Rogers (Chris Evans) and company to steal Captain America’s shield — and she has been up to no good ever since, working as the nefarious Power Broker.

The Falcon and the Winter Soldier series also broke Baron Helmut Zemo (Daniel Brühl) out of prison. Bucky felt Baron Zemo’s knowledge of HYDRA and its attempts to recreate the super-soldier serum could give them an advantage over the new Captain America, John Walker (Wyatt Russell), and the Global Repatriation Council (GRC).

Both were investigating new super-soldiers known as the Flag Smashers led by Karli Morgenthau – played by Erin Kellyman from Solo: A Star Wars Story (2018). In the third episode, it is revealed that the new super soldier serum has been developed by the Power Broker AKA Sharon Carter.

By the end of the series, Zemo had escaped from Sam and Bucky but was later recaptured by the Dora Milaje and taken to the Raft – the prison for enhanced individuals in the Marvel Universe. However, despite being locked up Zemo was still able to orchestrate the assassination of many of the remaining super soldiers in the Flag Smashers.

So fans have clued that from inside the Raft, Zemo may be building his own team of powerful villains and anti-heroes to take on the Avengers or other teams that might be coming down the line like the West Coast Avengers, the Young Avengers, or even the Dark Avengers.

Just recently on Instagram, Guardians of the Galaxy director James Gunn denied rumors that he was working on a Thunderbolts project, saying he had no interest in the team. Perhaps it is too similar to his upcoming Suicide Squad movie for DC Comics. But that does not mean Marvel boss Kevin Fiege does not have something in store for the Thunderbolts, and we certainly haven’t seen the last of Baron Zemo.

So Who Are The Thunderbolts?

In Marvel Comics there are a couple of versions of the team. The original comic book Thunderbolts team was led by Baron Zemo and was made of “reformed” villains. They serve as an alternative to the Dark Avengers, and many characters show up on both teams. They were created by Kurt Busiek in 1997.

The new team arose in the wake of the death of the Avengers and The Fantastic Four – though in true comic book fashion they were not actually dead. The Thunderbolts gained the public trust but later revealed that they were the Masters of Evil, and they were after Avenger and S.H.I.E.L.D. secrets.

Ross is rumored to show up at some point in The Falcon and the Winter Soldier. There is a reference to him in the end credits. And, he will at least return in the upcoming Disney+ original series She-Hulk (coming 2022). However, Ross is not the only Thunderbolts’ character rumored to come to the Marvel Cinematic Universe in Phase 4.

What Characters Could Be Involved in the MCU’s Thunderbolts?

Emil Blonsky AKA The Abomination (Tim Roth) has been confirmed to also return in She-Hulk. He has not been seen since The Incredible Hulk (2008), but Abomination is a long-time member of Ross’s Thunderbolts lineup.

In both his comic book and MCU origin Blonsky intentionally exposed himself to gamma radiation to take the Hulk. Unlike Bruce Banner, he was never able to return to his human form and was eventually driven mad with rage.

Other characters from The Falcon and The Winter Soldier could also join Marvel’s Thunderbolts. John Walker ended the series being recruited by Julia Louis-Dreyfus’s surprise cameo as Contessa Valentina Allegra de Fontaine — do not call her Val. Val is clearly up to no good and she could be working for Zemo to help build his team. They are both royalty after all.

Agents of SHIELD fans are also secretly hoping that Gabriel Luna could return to the MCU as Robbie Reyes AKA Ghost Rider. He recently expressed a desire to return after the Darkhold appeared in WandaVision. Another version of Ghost Rider — Johnny Blaze — was a long-time member of the Thunderbolts in the comics.

Another MCU character that some fans may have forgotten is Ghost. Played by Hannah John-Kamen in Ant-Man and the Wasp (2018). The reformed villain could be a perfect candidate for a potential Thunderbolts team in the Marvel Cinematic Universe.

Another character MCU fans might not expect to show up on a team of villains is Hawkeye (Jeremy Renner). However, in Clint Barton’s comic book origins he began as a bank-robbing criminal before he became an Avenger.

Hawkeye will get his own Disney+ original series this fall and will introduce Kate Bishop (Hailee Steinfeld) and will take the character back to his comic book origins. It is rumored that Barton will be losing his hearing – he is deaf in the comics.

The series seems to be pulling a lot from Matt Fraction’s critically acclaimed 2012 Hawkeye series. This explores Hawkeye’s otherwise underdeveloped backstory, including referencing his time as a criminal. This was previously hinted at his time as Ronin in Avengers: Endgame (2019).

The long-delayed Marvel movie Black Widow (July 9th, 2021) will also introduce Marvel fans to two more potential Thunderbolts. Another red room graduate, Yelena Belova (Florence Pugh) is a version of Black Widow who was a member of the Thunderbolts – this one led by Spider-Man villain Norman Osborn AKA Green Goblin. Osborn was also a Dark Avenger.

In the comics, Yelena was later revealed to be Natasha Romanoff in disguise but the MCU could simply remove the unnecessary twist. The reshuffling of film and television releases around the Black Widow delays indicates that despite being a prequel it will set up something necessary for the future of the Marvel Cinematic Universe and that could be Yelena’s arc.

Related: Marvel Head Writer Claims To Be “Disappointment to the Fandom”

Black Widow will also debut Taskmaster. Though the version of Taskmaster in the MCU will be different from his comic book origins – including possibly being gender-swapped as Taskmaster could be Rachel Weisz’s mystery role.

In an episode of Ultimate Spider-Man (2014), Taskmaster led yet another version of the Thunderbolts.  His Thunderbolt lineup takes the team back to its criminal origins. Fans have waited a long time for Taskmaster to finally show up in the Marvel Cinematic Universe.

Taskmaster can copy any fighting ability instantly – known in Marvel Comics as “photographic reflexes”. This makes him a formidable opponent, and it gives him the upper hand in any hand-to-hand combat – except against Deadpool who is simply too unpredictable. Deadpool is also a member of the Thunderbolts.

WandaVision laid the groundwork for the multiverse in the MCU, setting up both Doctor Strange in the Multiverse of Madness (March 25, 2022) and Spider-Man: No Way Home (December 17, 2021). Similarly, The Falcon and the Winter Soldier could be building up a more Earth-centric storyline that will return in the upcoming series Armor Wars or even Secret Invasion, which are set to stream on Disney+ as soon as 2022.

The Falcon and the Winter Soldier ends in just a few short weeks. There are still many questions that need to be answered. Who is the Power Broker? What is Baron Zemo’s plan? Could Flag Smasher or even Sharon Carter end up working on the Thunderbolts in the future?

Let us know in the comments below if you think the Thunderbolts will show in the Marvel Cinematic Universe and who you think should be on the team? Since any potential Thunderbolts appearance is still off in the distance there is plenty of time for Kevin Feige to work in some of the more popular characters like Moonstone or Radioactive Man into the MCU.

Comments Off on Marvel’s Thunderbolts Are Coming to the MCU