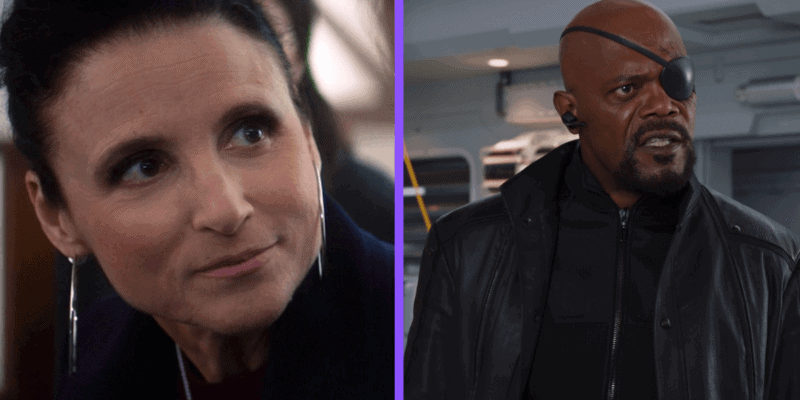 The Falcon and The Winter Soldier featured a blockbuster cameo in this season’s penultimate episode that set the internet ablaze with Marvel fan theories and possible future plot points. The addition of Julia Louis-Dreyfus to the MCU as Contessa Valentina Allegra de Fontaine — Val for short – in Falcon and Winter Soldier episode 5 “Truth”, was as unexpected as it was entertaining. Val’s appearance as Madame Hydra is likely setting up something big, that could send shockwaves through the Marvel Cinematic Universe for years to come.

Julia Luis-Dreyfus is a celebrated comedic actress who’s won 11 Emmys – 6 in a row – and known for her iconic roles on Seinfeld and Veep. Bringing in an actress with the comedic pedigree of Louis-Dreyfus is an indicator of the type of character Marvel fans can expect to get moving forward.

In a recent interview with Marvel.com, The Falcon and The Winter Soldier executive producer, Nate Moore, praised Julia Louis-Dreyfus’s range as an actress and commented on how Valentina’s character is viewed by Marvel, saying,

“Whenever we talked about Valentina, even in the writer’s room, she was sort of a more acerbic, funnier, but darker Nick Fury. Someone who knows her secrets, who’s not afraid to operate in the moral gray area, but maybe who isn’t as inherently altruistic.”

An immoral, hilarious Nick Fury? Sounds great, right? While Nick Fury (Samuel L. Jackson) began forming the Avengers in the famous post-credits scene from Iron Man (2008), we may have witnessed the “darker” version of Nick Fury, the Contessa, beginning to round up her team. But just who exactly is she assembling?

Who are the Dark Avengers? 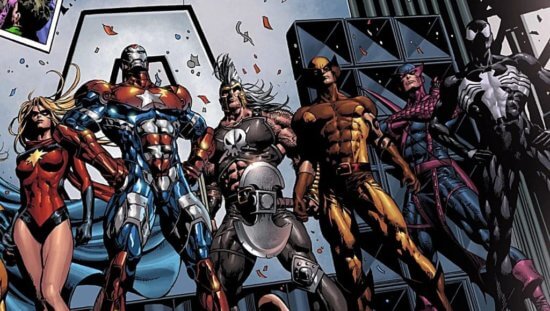 In Marvel comics, the Dark Avengers were formed following the events of Marvel’s massive crossover story arc Secret Invasion, which is currently being adapted for a Disney+ streaming series starring Samuel L. Jackson as Fury, Ben Mendelson (Talos), and Emilia Clarke. The Secret Invasion series, due out in 2022, is expected to pick up on threads from Captain Marvel (2019) as the MCU is shaken up by shapeshifting skulls impersonating Marvel’s biggest characters.

In the comics, the Dark Avengers were a knock-off replacement of the Avengers led by a then reformed Norman Osborn, and comprised of anti-heroes and villains claiming similar monikers to the classic Avengers. In other words, the Dark Avengers held a dark mirror to Earth’s mightiest heroes. The Dark Avengers were publicly presented as heroes, but behind the scenes committed acts that were anything but noble, and at best morally ambiguous.

Acting as the darker Nick Fury, the Contessa could be forming a group of jaded super-soldiers and enhanced humans as alternative heroes now that the Avengers are effectively disbanded. It’s said that this character was initially set to debut in the Black Widow (2021) film. And with that film exploring the secret history of Russia’s Red Room program, it’s possible that Val is representing a larger cabal, like a reconstituted Hydra, or Leviathan.

John Walker (Wyatt Russell), the disgraced former Captain America was humiliated in Falcon and Winter Soldier episode 5. Being stripped of his title, losing the Captain America shield, and having his arm broken by Sam Wilson (Anthony Mackie) and Bucky Barnes (Sebastian Stan) has left this super-soldier very disgruntled… not to mention unemployed.

The Contessa is no doubt looking to take advantage of John Walker’s vulnerable mental state and enhanced human abilities to lead her Dark Avengers team as Steve Rogers (Chris Evans) once led the Avengers.

It’s said in the MCU that the super-soldier serum not only gives the subject enhanced strength, speed, and durability, it also makes “you, more you.” The chief reason Steve Rogers was chosen as Captain America, and the original subject of the super-soldier serum was incredible heart and selflessness, characteristics that were magnified by the serum.

The opposite of that effect was demonstrated by the villain from The Incredible Hulk (2008), the Abomination (Tim Roth). Blonsky received a variant form of the super-soldier serum that gave him incredible power on par with the Hulk, but it also exacerbated his psychotic, callous, violent attributes as well.

Tim Roth is slated to appear as Abomination/Blonsky in the Disney+ series She-Hulk (Tatiana Maslany, Mark Ruffalo) and would fit perfectly on Contessa’s team as the dark version of Hulk.

Yelena Belova (Florence Pugh) is a sister of sorts to Natasha Romanoff (Scarlett Johannsson) and is set to appear in the film Black Widow on July 9th. Yelena and Natasha were part of the same brutal training school the Red Room, a Russian program that brainwashed young girls and trained them to become extremely deadly assassins.

In the comics, Natasha and Yelena’s relationship has yo-yoed from an alliance to a bitter rivalry many times,  but with Yelena sharing many of the same attributes that made Natasha one of the world’s most feared hand-to-hand combatants, and a troubled past, it’s no stretch to imagine Yelena Belova taking on the mantle of the new Black Widow for the deceased Natasha in the Dark Avengers.

Filling out the Dark Avengers Line Up

Other characters have already appeared in the MCU, that offer dark counterpoints to the powers and motivations of the original Avengers. We know Agatha Harkness (Kathryn Hahn) from WandaVision is an extremely powerful witch on the level of Wanda Maximoff (Elizabeth Olsen) and would be capable of assuming The Scarlet Witch role. Also from WandaVision, “White” Vision demonstrated his identity issues as he fought/debated Vision in the limited series finale.

In Spider-Man: Homecoming (2017) Marvel fans were introduced to a well-known Spidey villain, Mac Gargan aka Scorpion. In the comics version of Dark Avengers, Mac Gargan takes on the mantle of Spider-Man. Since the post-credits scene in Homecoming, Scorpion hasn’t played much of a role in the MCU, but that could change if he’s included in Contessa’s team.

Iron Patriot was the de-facto Iron Man (with a Captain America paint job) for the Dark Avengers in the comics, although it was Norman Osborn donning the suit, not James Rhodes. With Armor Wars headed to Disney+ in 2022 starring Don Cheadle as Rhodey, it remains to be seen if Iron Patriot will reemerge.

Even Baron Zemo (Daniel Bruhl) could get in on the action if he were to escape Wakanda and the Dora Milaje. In the comics, Zemo is a part of a similar alternate Avengers squad known as the Thunderbolts. Given his popularity in Falcon and Winter Soldier, Marvel Studios may want to keep Zemo around. Flag Smasher (Karli Morgenthau) is another compelling character with a troubled world-view that could fit in as a Dark Avenger, but first she’ll have to survive the Falcon and Winter soldier finale.

What do you think? Is Val building up an evil version of the Avengers? Who else could join the Dark Avengers? Let us know in the comments!

Comments Off on ‘Dark Avengers’ Rising Thanks to Huge Marvel Hint