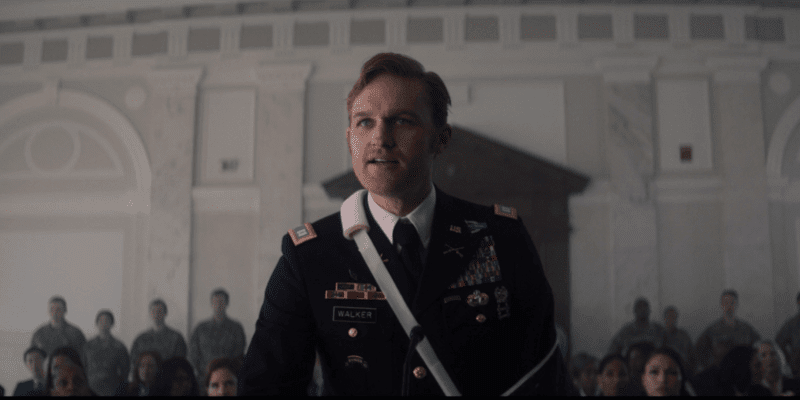 Wyatt Russell made quite the first impression when he debuted as John Walker AKA the New Captain America in the Disney+ adventure epic, The Falcon and the Winter Soldier created by Malcolm Spellman. Hot on the heels of WandaVision’s smash success — which kicked off Marvel’s Phase 4 and also the Marvel Cinematic Universe’s first foray into the television world — The Falcon and the Winter Soldier became a huge hit for Disney+.

The MCU series follows Anthony Mackie’s Sam Wilson/Falcon and Sebastian Stan’s Bucky Barnes/Winter Soldier, which sees the unlikely duo pair up to take on the Flag-Smashers — headed up by Karli Morgenthau, Solo: A Star Wars Story’s Erin Kellyman — and detour into the murky depths of the criminal underworld alongside Daniel Brühl’s Baron Helmut Zemo and Emily VanCamp’s Sharon Carter, as they search for the mysterious Power Broker. It all adds up to deliver a high-octane thriller spanning the globe.

While the plot alone is enough of a draw for Marvel fans, the reprisal of fan-favorite characters Sam Wilson and Bucky Barnes has proven a sure-fire hit. From an intense session of therapy to a domestic boat-building montage in the latest episode, the two have shown that they can thrive outside of Steve Rogers’ (Chris Evans) shadow. Both uniquely tied to the famous Avenger, Wilson’s and Barnes’ journey in The Falcon and the Winter Soldier came to a head when actor Wyatt Russell’s Captain America desecrated the shield and destroyed the mantle he’d been handed in a horrific display of power.

Russell has been the subject of many conversations regarding his role and takes on Captain America — the character that Chris Evans made famous during his long tenure as the superhero, starring in three hugely successful solo movies, starting with Captain America: The First Avenger (2011), as well as the mega team-up Avengers films, which culminated in the epic Avengers: Endgame (2019). Russell even hinted at Evans’ return to the MCU.

Some fans have shared memes that went viral — Russell even saw and reacted to one — and other fans have come to his defense, stating he is playing a character and doing it well. Wyatt Russell was even one of the most popular actors in the world at one point, appearing in the top three of IMDb’s StarMeter. Due to the immense reaction to his character in The Falcon and The Winter Soldier, speculation saw people questioning whether Wyatt Russell had been bullied off of social media due to Marvel fans not being able to locate his online accounts.

Well, in a recent interview on The Rich Eisen Show, Russell actually commented on these rumors. In a response to Eisen asking if he had “tapped out” of social media due to the Captain America backlash, Russell said:

“Somebody asked me that, I don’t have social media. I’ve never had it”

It might shock a lot of people that in today’s digital world where likes and comments seem more like transactions, that a famous actor doesn’t have any social media presence. Russell went on to talk about the hate he has received and how he processes it. He said:

“What’s so interesting about the world we’re in now is that you have these virtual worlds people live in like I don’t live there, I proudly, happily, live in reality land […] but there’s a world that I think I exist as an alternate being in an alternate universe that people really dislike…”

Russell explained that the resentment John Walker is facing from Marvel fans is all part of the job,  Russell went on to say:

He did issue a warning though, suggesting there is a line that could be crossed and reminding fans that the characters exist within the realms of a fictional world.

It would seem that Wyatt Russell has a handle on the outpouring of backlash he has faced since arriving on the scene at the end of The Falcon and the Winter Soldier’s first episode, but his view on this “virtual world” isn’t that commonplace in mainstream media. During the Star Wars sequel trilogy, we saw Kelly Marie Tran, who played maintenance worker Rose Tico, had to leave social media due to the toxic hate from fans.

Wyatt Russell — who is the son of actor’s Kurt Russell and Goldie Hawn, and married to actress Meredith Hagner — has definitely polarized a fandom with his take on the super soldier, Captain America. The star-spangled hero has become a beloved part of the MCU and both movie and Marvel comic fans are certainly holding John Walker to an extremely high standard. As the finale of The Falcon and the Winter Soldier fast approaches, only time will tell if Russell’s time in the Captain America spotlight is almost at its end. Will Sam take up the mantle or will Chris Evans’ Steve Rogers return to the Marvel universe?

What do you think of Wyatt Russell’s take on Marvel fans?