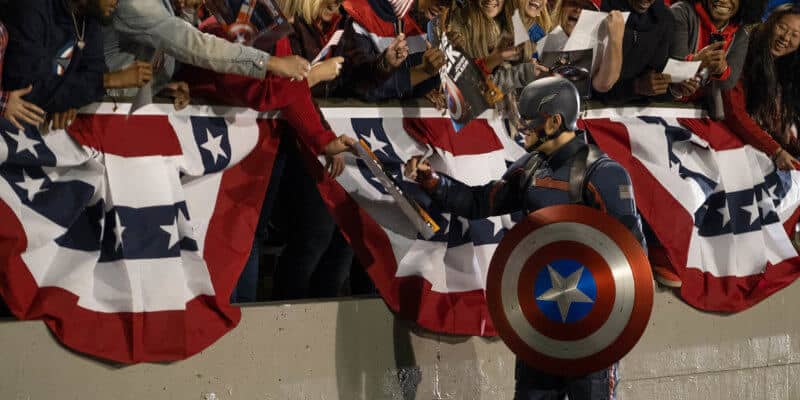 When you think of big Hollywood stars, especially when it comes to the Marvel Cinematic Universe, you may think of someone like Robert Downey Jr., Chris Evans, or Scarlett Johansson. Looking at Marvel’s recent television outings, you may also think of Elizabeth Olsen or Sebastian Stan.

Right now, however, Marvel newcomer, actor Wyatt Russell, is ranking as one of the world’s biggest stars!

Russell recently came to our screens when he was unveiled as the new Captain America in the Disney+ series, The Falcon and The Winter Soldier. Giving viewers a quick wink before the credits rolled, fans saw this new take on the hero in all his star-spangled glory – famous shield included.

Since the premiere of The Falcon and The Winter Soldier, Russell’s character, John Walker — who first appeared in the Marvel comics in November 1986 — has been divisive among Marvel fans. In real life, Russell has also felt the backlash — like when he revealed that he had never seen a Marvel movie before taking up the Captain America mantle. Some fans have even taken to comparing Russell’s Captain America to the grumpy Pixar character Carl Fredricksen in a pretty harsh meme.

With all the buzz surrounding The Falcon and The Winter Soldier, particularly following WandaVision’s runaway success, it’s clear that Wyatt Russell’s star is rising. In the first three episodes of the blockbuster television show we haven’t seen an awful lot of John Walker’s Captain America. He’s done a Good Morning America interview and come to blows with Anthony Mackie’s Sam Wilson/Falcon and Sebastian Stan’s Bucky Barnes/Winter Soldier, over their handling of the out-of-control Flag Smashers.

It should be said that a lot of fan reaction towards Wyatt Russell is inevitably rooted in his portrayal of the fan-favorite character, Captain America which Chris Evans made famous. Evans was a staple of the Marvel Cinematic Universe from his first appearance as Steve Rogers in Captain America: The First Avenger (2011) all the way through to the Infinity Saga finale, Avengers: Endgame (2019).

Well, now Wyatt Russell has flown to the top three of IMDb’s StarMeter chart. The chart ranks celebrities from film and television on a basis of how popular they are at any time. Russell is currently sitting at number three behind MonsterVerse mega-hit stars Alexander Skarsgård and Eliza González, who appear in the new Godzilla vs. Kong (2021) film. It should be noted that Wyatt Russell has seemingly dropped two places — evident by the red arrow — which means at one recent point, he was the most popular actor in the world — at least according to StarMeter’s rankings.

He is the most popular Marvel star for sure. The next Marvel entries come at number six with Erin Kellyman (Karli Morgenthau) and Sebastian Stan at number eight. It’s always interesting to see supporting characters outrank the leading stars. We saw it last year when Gina Carano – controversial star of The Mandalorian – rose to number two on the StarMeter and ranking higher than leading man Pedro Pascal — the Mandalorian himself.

While the Marvel actor (and former hockey player) doesn’t have any social media accounts, both his mother, Goldie Hawn, and sister, Kate Hudson, share photos of him from time to time! Russell is the son of Hawn and longtime partner, Kurt Russell. He is married to actress Meredith Hagner who starred in the films Brightburn (2019) and Palm Springs (2020), and his brother is another fellow actor, Oliver Hudson. Before becoming John Walker/Captain America in The Falcon and The Winter Soldier, the actor appeared in Overlord (2018) and 22 Jump Street (2014).

Although now, he will most likely always be known as John Walker AKA the other Captain America.

What do you think to Wyatt Russell’s Captain America?