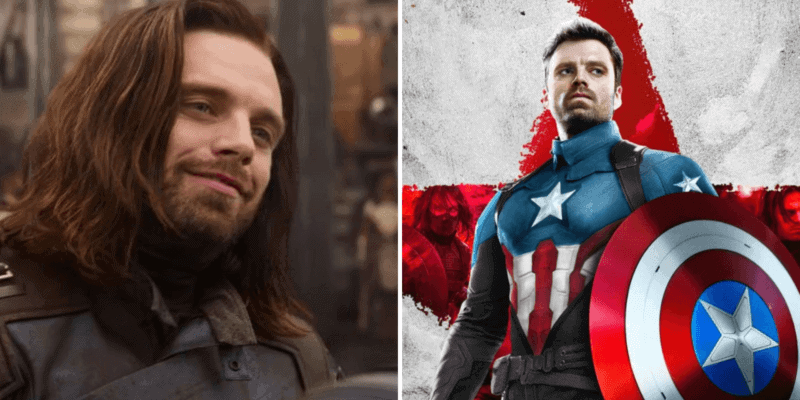 Ever wanted to see Bucky Barnes as Captain America? Well, you’re in luck.

Artist Art of Time Travel (@artoftimetravel) has shared a fantastic piece that imagines just that. If you’re a fan of Sebastian Stan in The Falcon and the Winter Soldier, you’ve got to check this out!

Most fans agree that Sam Wilson (Anthony Mackie) was indeed the right choice for Captain America. However, some Marvel fans still believe that the mantle should’ve gone to the only person who knew Steve Rogers (Chris Evans) in the 40s — Bucky Barnes (Sebastian Stan).

Now, thanks to Art of Time Travel, we can imagine what Bucky as Captain America would look like in the Marvel Cinematic Universe. Take a look for yourself!

Will Bucky wield the shield in The Falcon and the Winter Soldier?

At the time of writing, he already has as he caught the shield during a confrontation involving John Walker / U.S. Agent (Wyatt Russell). However, episode three also hinted that Bucky may look to take up the mantle of Captain America. He tells Sam Wilson that somebody needs to wield the shield and if Sam won’t, he will.

It seems unlikely that Bucky will actually wear the Captain America suit before Sam does, but both men are incredibly unhappy with Walker using it. However, we know that the series will end with Sam donning the iconic Falcon / Cap suit, as this was unfortunately leaked by early merchandise.

Still, it’s reassuring to know that our heroes will eventually rise up and Sam will become the first Black Captain America. Be sure to check out the rest of The Art of Time Travel’s work right here.

Bucky as Captain America: would it work?

The Winter Soldier becoming Captain America is still a point of debate for Marvel fans. While some argue that he is overcoming his past, others argue that his time as The Winter Soldier makes Bucky inappropriate to be the star-spangled man. Then again, John Walker wasn’t chosen by Cap despite being perfect on paper. Both Walker and Bucky clearly lack something important that Steve Rogers saw in Sam Wilson.

We also have to consider that Bucky may not want to become Captain America. His time as the Winter Soldier again raises some uncomfortable questions in regard to public safety, even though he’s been officially pardoned. Furthermore, Bucky is clearly scarred by his past actions; a major plot point in The Falcon and the Winter Soldier.

Whether due to HYDRA, Red Skull, or Zemo, he’s done some terrible things that were sadly beyond his control. He might have the super soldier serum and possibly even Cap’s shield, but it’s likely that he’ll never live up to his friend’s legacy; in his mind, at least. He’s also unable to ask Steve for advice as he’s living happily in the past with Peggy Carter.

Fortunately, we’re quite happy with Bucky the way he is: a wicked cool super soldier and Sam Wilson’s partner.

The Falcon and the Winter Soldier is a Disney+ exclusive, with new episodes coming every Friday. It stars Sebastien Stan, Anthony Mackie, and Wyatt Russell as John Walker well as Emily VanCamp as Sharon Carter and Daniel Brühl as Baron Zemo. Catch Nick Fury, Tony Stark, and every other Marvel Universe hero exclusively on Disney+ where you can stream the Marvel Cinematic Universe; from Iron Man to Endgame.

You may have forgotten it, but yes, Bucky Barnes is a super soldier. It’s by no means essential for Captain America to have taken the super soldier serum, but it does make you wonder if Sam Wilson will go the same way as all of the other super soldiers. We’ve seen several of them in the MCU so far, most notably Bucky, Steve, Bradley, Karli, and now John Walker.

However, if your argument for Bucky as Captain America is that he should be as physically able as Steve Rogers, it’s a good fit. Yet, as we can see from new Captain America John Walker, the serum does not make you a good superhero. A good super soldier, perhaps. But a hero is born, not grown. Steve had the compassion and pride in his country that made him Captain America; something both Bucky and Sam have exhibited.

The legacy of Steve Rogers looms heavily over The Falcon and the Winter Soldier. Both Sam and Bucky constantly refer to Steve, and Bucky has given Sam grief for rejecting Steve’s shield.

The Marvel universe lost an amazing character with Steve and an incredible actor in Chris Evans. Hopefully, Sam will take up the mantle soon as, as he says: the world needs Captain America. Who knows, maybe the Winter Soldier will end up wielding it too…

Do you like Bucky as Captain America? Let us know in the comments below.