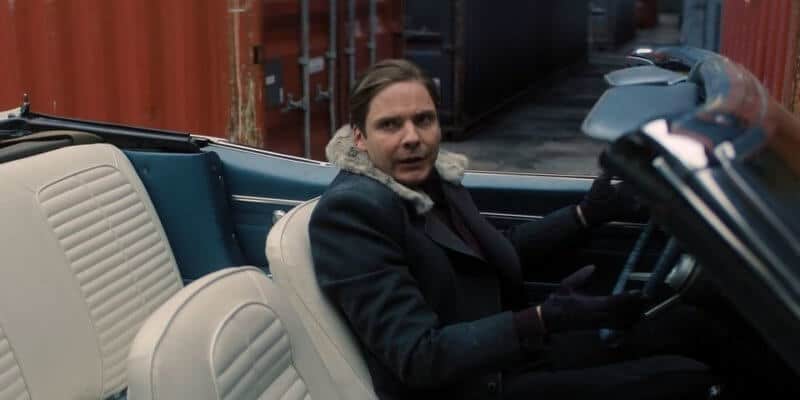 Since the latest episode of The Falcon and the Winter Solider aired on Disney+ last Friday, Baron Zemo (Daniel Bruhl) fans have been coming out of the woodwork — especially after his now-famous dance moves began making their way around social media through multiple memes.

There’s a whole new appreciation for Zemo in the Marvel Cinematic Universe.

But, did you know Daniel Bruhl, who has played Baron Helmut Zemo since Captain America: Civil War (2016), is connected to the Pixar universe as well?

Long before the “Dancing Zemo” meme went viral, Bruhl did some voice acting work for Pixar’s animated feature, Cars (2006). And, if you are wracking your brain trying to think which Cars character Bruhl voiced, you might be struggling, — because it wasn’t in the original American version of the film.

Thanks to TikTok users @sketchycamel and @gryffindorkangelina, fans have realized that Bruhl voiced the legendary Lightning McQueen in the German version of Cars! Take a look, below:

After his intimidating role as Baron Helmet Zemo throughout the Marvel Cinematic Universe, it’s hard to picture him lending his voice in a Pixar movie. Fortunately, we don’t have to wonder what Bruhl would look like voicing Lightning McQueen. Thanks to Rachel Paige (@rachmeetsworld) on Twitter, we have a video of Bruhl in this voice acting role.

Please do not ask how I ended up here, but does everyone know that Daniel Bruhl is the voice of German Lightning McQueen

please do not ask how I ended up here, but does everyone know that Daniel Brühl is the voice of German Lightning McQueen pic.twitter.com/m1hBSeAiwj

Since this is just the beginning of Baron Zemo’s story arc in The Falcon and the Winter Soldier on the Disney+ streaming service, we really don’t know his fate for the rest of the series.

There are still many fan theories out there and, as we learned with the recent conclusion of Marvel’s WandaVision series, anything can happen! Check out a wild theory about Sharon Carter (Emily VanCamp) in the new hit Marvel series, here!

Did you know that Daniel Bruhl was the voice actor for the German version of Pixar’s Lightning McQueen? What do you think? Let us know in the comments!