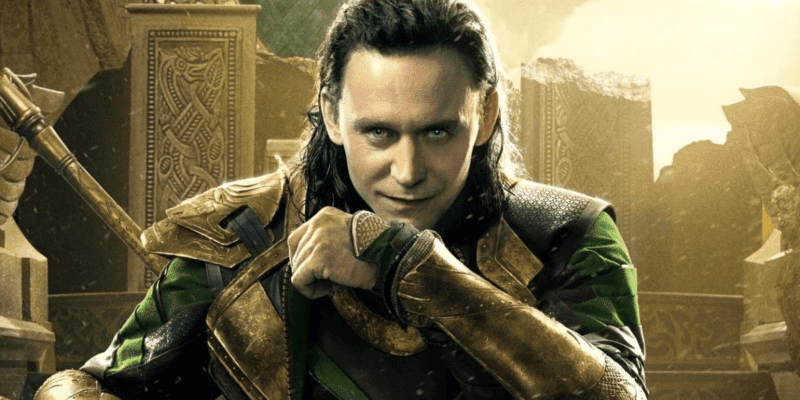 Portrayed by actor Tom Hiddleston in the Marvel Cinematic Universe, Loki has a complicated history with the Avengers. As the adopted brother of Thor (Chris Hemsworth), Loki was raised in the magical realm of Asgard. He wields formidable powers as a master illusionist and has a well-earned reputation as an opportunistic trickster. Loki’s place in the Marvel Cinematic Universe can be difficult to pin down, and identifying his mischievous character motivations can be even more challenging. He has often been depicted as a villainous mastermind, but at times he’s also been an ally to Thor and the Avengers. Despite meeting his demise in Avengers: Infinity War (2018), Loki carries on in a new alternate timeline — and a new series. Hot on the heels of successful Marvel Cinematic Universe series WandaVision and The Falcon and The Winter Soldier, Loki looks to keep audiences hooked on the MCU by showing a new side of a fan-favorite character. This guide has everything you need to be current with the character prior to watching the Disney+ series, Loki.

How Loki is introduced in the MCU

Why does Loki introduce himself as Loki of Asgard?

As a small child, Loki was abandoned by his biological father, Laufey, leader of the Frost Giants in Jotunheim. Loki was taken in by Odin (Anthony Hopkins), once the mighty King of Asgard and Frigga (Rene Russo), Queen of Asgard. Loki was raised as a brother to Odin’s biological son, Thor.

Raised as a prince of Asgard just like his brother Thor, Loki goes by the name Loki Odinson of Asgard.

How are audiences introduced to Loki in the MCU?

In Marvel Studios Phase 1 movie, Thor (2011), Loki looked to exploit his Frost Giant heritage, enlisting the Frost Giant army as a means of claiming the throne of Asgard for himself, rather than have Thor ascend to the crown. While Thor was sent to Earth, stripped of his powers by Odin, Loki seized on the opportunity to make a power grab.

What is meant to be the audience’s first impression of Loki in the MCU?

Loki is introduced to Marvel Cinematic Universe audiences in Thor (2011) as Thor’s quick-witted, conniving brother. While unable to match Thor’s brawn, nor the power of his mighty hammer Mjölnir, Loki was quick-witted, and manipulative. Throughout the Infinity Saga, Loki has demonstrated that he indeed shares a brotherly bond with Thor, but that doesn’t stop him from taking every opportunity to elevate his power and status.

In Thor, Loki uses his position in Thor’s inner circle to manipulate him into defying Odin’s commands and making war with the Frost Giants. This is the act that gets Thor banished to Midgard by Odin (Earth in Asgardian terminology), allowing Loki to hatch a complicated plan to become King of Asgard.

Loki’s timeline in the MCU

In what films is Loki featured in the MCU?

Loki (Tom Hiddleston) appears in six films in the Marvel Cinematic Universe. He appeared in a Marvel film for consecutive years from 2011-2013, before taking a break. He rejoined the MCU for another run from 2017-2019. No word yet from Marvel Studios on if Loki will appear in the upcoming MCU Thor sequel, Thor: Love and Thunder (2022)

How does Loki impact the MCU timeline?

Loki has impacted Marvel’s main timeline tremendously throughout his run as a Marvel Studios antagonist. He was the chief villain of The Avengers (2012), as he worked in congress with Thanos. Loki’s deal with Thanos to seize control of the Tesseract, which contained the Space Stone, and use Thanos’ hivemind army known as the Chitauri sets in motion many of the events of Marvel’s Infinity Saga. Loki’s imminent threat necessitated Nick Fury forming the Avengers, as he gathered Iron Man (Robert Downey Jr.), Captain America (Chris Evans), Thor ( Chris Hemsworth), Hulk (Mark Ruffalo), and SHIELD operatives Black Widow (Scarlett Johansson), and Hawkeye (Jeremy Renner.)

In Infinity War, Loki is killed by Thanos early in the film’s action. Loki at first challenged his former co-conspirator Thanos, siding with his brother Thor, and unleashing Hulk on Thanos. When Hulk is easily defeated, Loki feigns submission, offering his services as a guide to Earth. While doing so Loki readies his dagger, hoping to get close enough to Thanos for a kill. Thanos blocks this move easily, and kills Loki. Thor mourns over his brother’s noble sacrifice, proving their brotherly bond.

This is not the last we see of Loki however. In Endgame we encounter an earlier version of Loki in the Marvel Cinematic Universe Timeline. During the “Time Heist,” Iron Man (Robert Downey Jr.), Captain America (Chris Evans), Ant-Man (Paul Rudd), and Hulk (Mark Ruffalo) botch their attempt to retrieve the Tesseract containing the Space Stone. This crew of Avengers travels to the 2012 timeline where they encounter Loki at Stark Tower in the aftermath of the Battle of New York. During this encounter, Loki manages to escape shield custody by employing the Space Stone to make his escape. Presumably, this act created an alternate timeline in the Marvel multiverse that could have important ramifications on the Marvel Cinematic Universe timeline.

In what future films will Loki star in the MCU?

Loki’s inclusion in future Marvel Cinematic Universe films is unclear, but the Disney+ series Loki — due out June 11th — promises to answer many questions left unanswered in Endgame. The new series picks up just after Loki manages to escape SHIELD custody in Endgame. Loki is intercepted moments after disappearing from the 2012 timeline by the Time Variance Authority, or TVA, seemingly in a branch alternate timeline. It remains to be seen what effect fan influence will have on the continuity of Loki in the MCU.

From Marvel’s official description of Loki:

“Loki features the God of Mischief as he steps out of his brother’s shadow in a new series that takes place after the events of Avengers: Endgame. Tom Hiddleston returns as the title character, joined by Owen Wilson, Gugu Mbatha-Raw, Sophia Di Martino, Wunmi Mosaku and Richard E. Grant. Kate Herron directs Loki, and Michael Waldron is head writer.”

Actor who plays Loki in the MCU

Who is the actor who plays Loki in the MCU?

Tom Hiddleston has portrayed Loki in the Marvel Cinematic Universe since appearing in Thor in 2011. The role of Loki broke Hiddleston into the mainstream, quickly making him a Marvel fan-favorite. He got his start in British stage and television productions before his rising star brought him Hollywood fame — working with acclaimed directors such as Steven Spielberg (War Horse) and Guillermo Del Toro (Crimson Peak). Hiddleston will star opposite Owen Wilson in the upcoming Loki series.

How was the actor who plays Loki received by critics and audiences?

Following his breakout roles in Thor and The Avengers, Tom Hiddleston gained the favor of diehard Marvel Comics fans and Marvel Cinematic Universe fans alike. He’s also well respected by critics. He has been recognized for his talents as the recipient of several prestigious awards, including a Laurence Olivier Award and a Golden Globe. He’s also been nominated for Emmy Awards, and a Tony Award.

What is Tom Hiddleston’s background?

Tom Hiddleston was born in Westminster, London, England on February 9th, 1981. He was introduced to the world of acting at a young age by his mother, an arts administrator and casting director. While attending Eton College, and later the University of Cambridge, Hiddleston began appearing in stage productions. He went on to break into British television with smaller roles, which earned him larger roles in British theater productions, including several Shakespearean plays. In 2008, Hiddleston starred opposite famed English actor Kenneth Branagh in Ivanov. Impressing his co-star, Branagh cast Hiddleston when he signed on as director for Thor.

Here are a few of the best Loki stories from Marvel Comics, that will likely provide inspiration for the Disney+ series.

This story is a parody of the 2016 Presidential Election. It exists outside the main Marvel Comics timeline, and is presented as a stand-alone miseries. The story focuses on Loki’s attempt to put aside his villainous ways, and make a run for President of the United States. While not canon, the story employs Loki’s character in a comical and compelling way that will help familiarize MCU fans with Loki’s comic book persona. The Disney+ Loki trailer depicts Loki wearing a suit lifted directly from the pages of Vote Loki.

The biggest difference between the Marvel comics version of Loki and his counterpart in the Marvel Cinematic Universe, is the relationship he has with his family – Thor, Odin, and Frigga. In the MCU, Loki has a complicated relationship with his adoptive family, but overall is shown to have a loving, respectful bond with them, especially Frigga and Thor. In the pages of Marvel Comics, Loki has mostly been presented as a villain and completely at loggerheads with Thor. Only after the MCU presented Loki as having a close-knit relationship with his mother, did the comics pick up on that thread.

In the comics, Loki is reborn for a time as female Loki. Female Loki was a popular character among Marvel fans for some time, and there is hope that the Disney+ series may include the character as part of an alternate timeline. Another popular incarnation of Loki is “Kid Loki.” Kid Loki is another reborn version of the character, this time with the trickster god casting off his villainous ways and striking out on a path of a hero.

In the comics, Loki is indeed a god of mischief, often employing sorcery and masquerading as other heroes or villains in order to orchestrate his desired outcomes. In the Marvel Cinematic Universe, Loki has passed himself off as Odin, acting as King of Asgard, and even Captain America. In both the comics and the MCU, Loki is born to Frost Giants, abandoned, and taken in by Asgardian royalty.

Perhaps the most meaningful similarity is that Loki in the comics, as in the Marvel Cinematic Universe, is responsible for bringing together the Avengers.

How will Loki affect Marvel’s timeline in the Disney+ series Loki? What characters do you hope will make an appearance? Let us know in the comments!

Comments Off on Understanding Loki in the Marvel Cinematic Universe