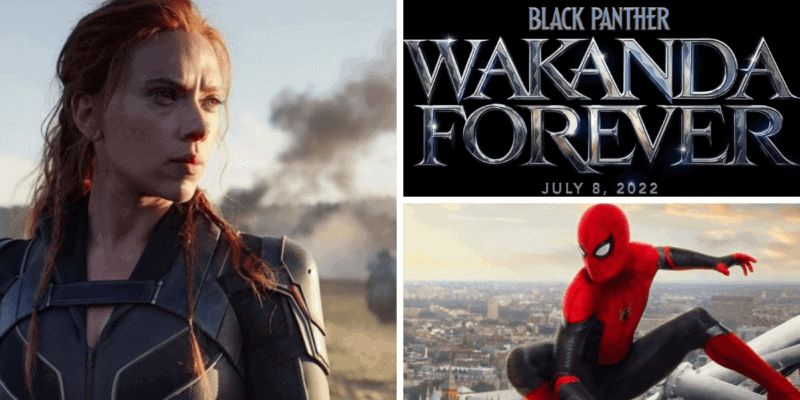 All Images Credit to Marvel

Thanks to a Phase 4 sizzle reel from Marvel that was released today, May 3, 2021 (13 years from the day that the first Iron Man film was released in theaters) we got released dates for Marvel Studios films through 2022 as well as the titles for some of the most highly anticipated sequels coming to the MCU.

Here are all the release dates and details you need to know about the Marvel Cinematic Universe Phase 4.

Black Widow will kick off Phase 4 of the MCU on July 9, 2021. Black Widow has had its release date pushed back more than a year due to the ongoing pandemic, and will be released simultaneously in theaters and on Disney+. This is the first Marvel movie to be released on Disney+ under the Premier Access label.

Fans have been excited to see Black Widow get her very own movie. Directed by Cate Shortland and starring Scarlett Johansson, David Harbour, Florence Pugh, O-T Fagbenle, and Rachel Weisz, this film is set to give further backstory and depth to the character of Natasha Romanoff.

Here is the synopsis of the film:

Shang-Chi and the Legend of the Ten Rings

Shang-Chi and the Legend of the Ten Rings will bring a new hero into the MCU on September 3, 2021.

Marvel has already begun releasing teasers and the trailers for the upcoming film! Directed by Destin Daniel Cretton and starring, Simu Liu, Awkwafina, Tony Leung, Michelle Yeoh, Fala Chen, Meng’er Zhang, Florian Munteanu, and Ronny Chieng, Shang-Chi and the Legend of the Ten Rings is set to be an action-packed film.

Here is a synopsis about Shang-Chi and the Legend of the Ten Rings from Marvel:

Award-winning director Chloe Zhao is bringing The Eternals to life on the big screen for Marvel.

Here is the official synopsis of The Eternals:

We anticipate Marvel will release a trailer for The Eternals in the near future!

Spider-Man: No Way Home will round out Marvel’s Phase 4 releases in 2021 when it debuts on December 17.

We know that this movie will pick up right after the events of Spider-Man: Far From Home. Directed by Jon Watts, and of course, starring Tom Holland as Spider-Man there have been a ton of fan theories and rumors online about this film. Spider-Man: No Way Home is currently being filmed.

Doctor Strange in the Multiverse of Madness will tie in the recent WandaVision series from Disney+ — truly bringing the Marvel series and Marvel Cinematic Universe together!

Directed by Sam Raimi and starring Benedict Cumberbatch as Doctor Strange and Elizabeth Olsen as Wanda Maximoff, there is plenty to look forward to when this film debuts on March 25, 2022.

Thor: Love and Thunder is set to be released on May 6, 2022. Directed by Taika Waititi and starring Chris Hemsworth, this film will see the return of Natalie Portman to the franchise as Jane Porter, the love interest of Thor.

Thor Love and Thunder has started filming, and we cannot wait to see the finished product!

Arguably the biggest announcement from Marvel Studios today amid all of this fantastic news is the reveal of the name for Black Panther 2, as well as a release date for the film.

The Marvels will continue the story of Captain Marvel, as well as tie in Monica Rambeau’s new powers gained in WandaVision, and Ms. Marvel who is also getting her own Disney+ series. Coming November 11, 2022, this will have heavy Marvel Disney+ series ties just like Doctor Strange in the Multiverse of Madness.

Ant-Man and The Wasp: Quantumania

Ant-Man and the Wasp get their third MCU entry on February 23. Little is known about this film, but we cannot wait to see what Marvel has in store for fans of Ant-Man.

Guardians of the Galaxy Vol 3

Guardians of the Galaxy also get their third MCU entry just after Ant-Man on May 5, 2023. Again, little is known about the plot at this time, but we do know that James Gunn will be directing.

Lastly, Marvel teased out that Fantastic 4 will also be coming to the MCU likely at the end of Phase 4 or the beginning of the next phase! You can read more about the Fantastic 4 teaser here.

What do you think about Marvel’s Phase 4 lineup for the MCU? Let us know which film you are most excited about in the comments.