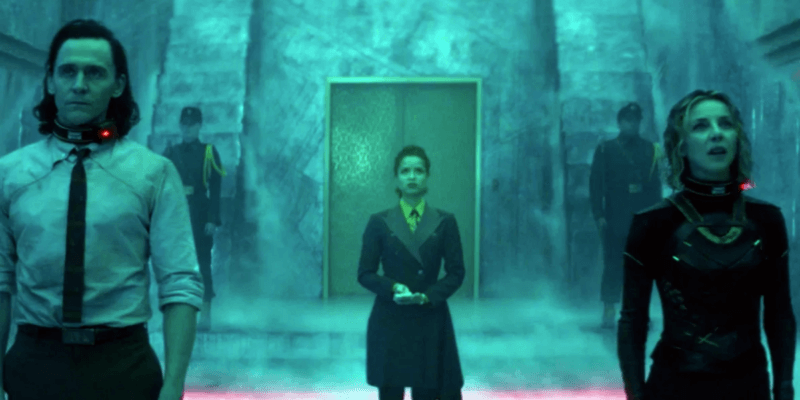 Marvel’s Loki series sent shock waves through the internet. Marvel fans are still coming down from the high of amazing twists, cool Easter eggs, and fun cameos. While trying to wrap their minds around all the things that the Loki series revealed many are now speculating who could be behind the mysterious Timekeepers.

And all those theories could be wrong.

Episode 4, “The Nexus Event” brings Tom Hiddleston’s Loki and Sylvie (Sophia Di Martino) before the Timekeepers to be pruned. It does raise the question of why Judge Ravonna Renslayer (Gugu Mbatha-Raw) did not just eliminate them immediately like she to Owen Wilson’s character Mobius M. Mobius.

The Loki variants get the upper hand against the Time Variance Authority (TVA) thanks to the sudden turn of Hunter B-15 (Wunmi Mosaku). And Marvel fans are treated to the stunning revelation that the Timekeepers are not the all-powerful “space lizards” that the God of Mischief believed them to be.

Who Do Fans Believe is the True Villain of Loki

Fans immediately are jumping to the Marvel Comics villain Kang the Conqueror aka Nathaniel Richards as the mastermind. And there is definitely plenty of evidence to support that. Kang is a Fantastic Four villain who first appeared in Avengers #8 in 1964 written by Stan Lee himself.

Kang is a time-traveling inventor who uses advanced technology to control time travel to maintain a version of the timeline where he rules the Universe from his Chronopolis – which looks suspiciously similar to the Time Variance Authority. He is certainly capable of creating three giant robots to pose as the Timekeeper to keep the TVA agents in line.

Even more compelling is his connection with Ravonna Renslayer, his long-time love interest in Marvel Comics. Even Ravonna’s TVA number hints that she is connected to Kang in the Marvel Cinematic Universe. In the flashback where she captures Sylvie, her badge reads A-23, a reference to her first appearance in Avengers #23 (1965), where she is introduced alongside Kang the Conqueror.

Reddit user Hpotter821 even added to this Kang the Conqueror theory suggesting that none of the pruned variants like Mobius are killed:

Kang the conqueror: So in the comics Prime Kang wanted to eliminate all other versions of Kang to ensure that he would become Immortus. What if MCU Kang created the TVA to prevent any other timelines with Kang variants to form.

And what if where Loki ends up in the post credit scene of ep 4 is a version of Chronopolis made up of every person, place and thing the TVA ever pruned.

So, that settles that right? Kang the Conqueror is behind it all. The “Sacred Timeline” is his path to world domination.

But, not so fast.

Here’s Why It Can’t Be Kang the Conqueror

Any Marvel fan who has been paying attention to the other original series that have been airing on Disney+ — like WandaVision — knows that Marvel Studios boss Kevin Feige has been leading the audience down paths filled with red herrings.

It was not too long ago the fan base was convinced Mephisto was going to show up in WandaVision and they have still been joking that Marvel Comic’s devil will pop in everything from The Falcon and the Winter Soldier to Loki.

Marvel Studios has already confirmed that the Loki series will set up the Marvel multiverse for the events Doctor Strange in the Multiverse of Madness (March 25, 2021). And it’s done a lot in only four episodes to expand the Marvel Cinematic Universe.

But there are only two episodes left of the trickster god’s first season. And Marvel has already confirmed that Kang the Conqueror is showing up in Marvel Phase 4 in Ant-Man and the Wasp: Quantumania on February 17, 2023. Kang actor Johnathon Major has denied being Loki, but that does not mean he was telling the truth.

And he adds another card to the deck of the Young Avengers project that is certainly happening as a younger version of Kang the Conqueror is the hero Iron Lad. And Loki just added another one with Kid Loki.

Can the God of Mischief’s new series wrap up its storyline and set up not one but two Marvel movies in its last couple of episodes?

So, Who Is the Real Villain?

If Loki wants to keep the plot simple then it could have been Ravonna all along but if the Marvel Studio’s original series wants to pull off one more crazy twist then they could pull in another little known character from Marvel Comics to go up against the Prince of Asgard –  The Beyonder.

The Beyonder is one of the most powerful beings in the Marvel Universe. He is literally the physical representation of the multiverse. Though he appears in human form to understand lower beings. His alien race is known as the Beyonders who come from a dimension beyond the Marvel Omniverse.

His most famous storyline is the Secret Wars (2015) by Jonathan Hickman and Esad Ribic, where he kidnaps Earth’s Mightiest Heroes and villains to fight on Battleworld. The new version of Secret Wars would be a big step up from the Infinity Saga as it would serve as a way to introduce the X-Men, The Fantastic Four with their villain Doctor Doom, and the Spider-Verse.

It’s the one story that Avenger: Infinity War (2018) and Avengers: Endgame (2019) directors the Russo brothers said they would return for.

That creepy clock mascot of the TVA, Miss Minutes, made a big reference to Secret Wars in the first episode of Marvel Studio’s Loki. When the frost giant prince was waiting to processed after escaping with the Tesseract/ Space Stone during the Time Heist in Avengers: Endgame (2019), he is treated to animated reenactment of a Space/Time War.

And that post-credit scene featuring Classic Loki (Richard E. Grant), Worthy Loki (Deobia Oparei), Kid Loki (Jack Veal), and Alligator Loki that appears to be a wasteland version of New York – what if that is Battleworld.

As for what The Beyonder would to gain from secretly overseeing the TVA, well, if it’s a war he wants, then using less powerful Variants to hunt down the powerful ones and send them to his Battleworld, he’s successfully managed to turn war into bureaucracy, which has frightening potential. […] Thanos was a mortal who dreamt of being a god. The Beyonder is a god who dreams of being a man, and if he’s coming, it’ll take more than prayers to Loki to salvage the multiverse.

Battleworld is a place where the characters from the Multiverse existed today, just like these variants of the trickster god. It is an amalgamation of different locations in the Marvel Universe where no rules apply. New York City became the Kingdom of Manhattan and was right next to Higher Avalon – the Battleworld location most like Asgard, where Thor lived.

This is just one possible theory for how Loki might end. It could even be a character like Owen Reece aka Molecule Man who was a villain but became a hero when he helped rebuild the Marvel Universe after Secret Wars. He was created by the Beyonders as a singularity, being the same in every reality, to have the function of a “bomb,” which would destroy its universe if he died.

Another option comes from that mid credits scene. Richard E. Grant’s version of the God of Mischief could be more than just Classic Loki from Marvel Comics. He could also be a version known as Ikol (Loki spelled backward).

Ikol was created by Kieron Gillen in Journey into Mystery #622 in 2011. It was a continuation of the Kid Loki storyline where this older version of the Asgardian took over Kid Loki’s body and become the God of Stories, who currently exists as Loki in Marvel Comic continuity.

Could the whole plot of the Loki series have been just so the Old Loki can take over the body of the mercurial villain Loki and join the larger Marvel Cinematic Universe? We all know that what makes a Loki a Loki is that they never die.

New episodes stream every Wednesday – the new Friday – on Disney+. So, Marvel fans will just have to wait and see who created the TVA after all.

Let us know what you think of this theory or do you firmly believe it is Kang the Conqueror after all?

Comments Off on Don’t Fall For Loki’s Tricks, the REAL Villain Will Shock You