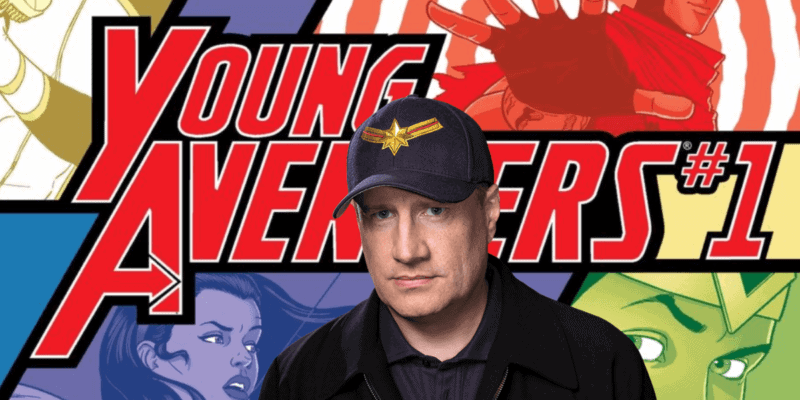 Phase 4 of the Marvel Cinematic Universe is underway. While many films, such as Black Widow, have had delayed releases Marvel fans already have a good idea of what is coming down the road. Just looking at the characters set to show up in the next phase of the MCU seems to suggest that Marvel Studios is building towards bringing the Young Avengers characters to either the big or small screen.

In a recent interview with Entertainment Weekly, Marvel Studios President Kevin Feige seemed to be teasing that Marvel has major plans for a lot of the characters they will be introducing in Phase 4. He said:

“You can certainly see that Phase 4 is introducing all sorts of new types of characters with the potential being endless. Now, all of us at Marvel Studios feel like […] as new actors and new performers come in, and we tell them they’re part of a bigger universe. They just now have to do the work required to build their audience…[I] can’t wait to show them the world.”

The Young Avengers formed in the wake of the Avengers Disassembled comic book event, in which the Scarlet Witch attacks the other Avenger’s Mansion after being driven mad by the loss of her sons. It centered a group of young heroes, inspired by fallen Avengers to rise up and fill the void alongside the New Avengers.

The young superheroes are fan-favorite characters ever since they debuted in Allan Heinberg’s Young Avengers (2005). The second volume of the series written by Kieron Gillen and illustrated by Jamie McKelvie, received the GLAAD media award for Outstanding Comic Book in 2014.

Related: Has ‘The Falcon and the Winter Soldier’ Just Cast a Young Avenger?

Rumors have been flying for months that the MCU is building to introduce the comic book team. Especially once Billy/ Wiccan (Julian Hilliard) and Tommy/ Speed (Jett Klyne) popped up in Marvel’s first Disney+ original series, WandaVision.

Billy and Tommy are two of the founding membered of the Young Avengers crew in the comics. And, while they seemed to have been erased from existence at the end of WandaVision, their disappearance was somewhat ambiguous. In the post-credit scene, their voices called out to Scarlet Witch/Wanda Maximoff (Elizabeth Olsen) suggesting they might show up in Doctor Strange in the Multiverse of Madness (2022).

It is also worth noting that this is exactly what happened to them in Marvel Comics. It was only after they were reincarnated that they formed the Young Avengers team. They only reunited with their mother in Children’s Crusade.

Another Young Avengers member that fans have already met is Cassie Lang/ Stature. We first saw her played by Abby Ryder Fortson in Ant-Man (2015). She aged up by the time she showed up again in Avengers: Endgame (2019) — then played by Emma Fuhrmann.

Cassie was recast yet again for the upcoming Ant-Man and the Wasp: Quantumania, where Kathryn Newton will take on the role of the Young Avenger. Casting Fuhrmann suggests that Cassie will play an important part in Quantumania and the future of the Marvel Cinematic Universe.

In one of the many upcoming Disney + original series, Hawkeye, fans already know they are going to see the debut of yet another Young Avenger — Kate Bishop/ Hawkeye (Hailee Steinfeld). Kate Bishop is another founding member of the comic book team and even was romantically involved with Tommy/ Speed in the comic universe.

Her version of Hawkeye is one of the central pieces that makes the Young Avengers work. And fan anticipation for her MCU debut is building to a critical level. A fan on Twitter, user Haileeloves says

“Hailee Steinfeld as Kate Bishop is coming and nobody is ready for it!! She’s going to take the MCU to a whole other level!!”

Hailee Steinfeld as Kate Bishop is coming and nobody is ready for it!! She’s going to take the MCU to a whole other level!! #hawkeye #katebishop pic.twitter.com/plXl9YzS8E

Let’s not forget that Ms. Marvel is coming to the small screen with her own series starring Iman Vellani as the Inhuman Kamala Khan. While Ms. Marvel was never a member of the Young Avengers team(she was on her own team call Champions) this could be changed for the Marvel Cinematic Universe.

Marvel head honcho Kevin Feige hinted in that same EW interview that some of these characters will subvert expectations:

“As a comic fan, anything in the comics is always our inspiration and our guide point. How those things come together and in what shape, it’s always subverting expectations, it’s always half the fun as meeting them.”

Yet another Young Avenger has been confirmed with America Chavez/ Miss America. Marvel Studios already confirmed that the character will be played by Xochitl Gomez in Doctor Strange in the Multiverse of Madness. America’s ability to create Star Portals between realities means she may be the key to resolving the multiverse plot.

In Falcon and the Winter Soldier Elijah Richardson is listed as Eli Bradley/ Patriot, the leader in the Young Avengers series. Though what part Bradley will play in the series is still a mystery. His grandfather Isaiah Bradley was used as a test subject of Captain America’s super-soldier serum, echoing the Tuskegee experiment and may be covered in the new series.

More Young Avengers Have Been Rumored

Some other pivotal members of the Young Avengers crew have not been officially confirmed by Marvel, but rumors of when and how they could appear are running rampant online. For example, Teddy Altman/ The Hulking — love interest of Billy/ Wiccan — could easily appear in the upcoming Secret Invasion. The Nick Fury (Samuel L. Jackson) led series will focus on the shape-shifting Skrulls from Captain Marvel (2018). Teddy is a half-Skrull.

A new rumor just breaking is that Kid-Loki could appear in Tom Hiddleston’s Loki series. A new casting call reported on by MCU Exchange for the show is looking for a “Male, 10 years old, British, Open Ethnicity, smart and brave with a sharp wit and life experience beyond his years.”

The description certainly fits a version of Kid-Loki. In the comics, Kid-Loki is more mischievous than villainous after the older version of Loki died at the end of the Ragnarok arc (similar to how Loki died in Endgame). Kid-Loki appeared off and on with the Young Avengers, less a team member, and more a manipulative sidekick.

Another rumored Young Avenger is Iron Lad. In the comics, Nathaniel Richards is a younger version of the time-traveling villain Kang the Conqueror. Kang is going to show up alongside Cassie Lang in Quantumania. However, there have also been rumors that Marvel Studios will go in a different direction with Iron Lad.

Harley Keener may take up the mantle of Iron Lad. He first appeared in Iron Man 3 (2013) but showed up again, much older, at Tony Stark/ Iron Man’s funeral in Avengers: Endgame (2019) now played by Ty Simpkins. Bringing a character back that fans thought they would never see again is just the thing that the MCU loves to do.

Similarly, when they brought on Katherine Langford to play an older version of Tony and Pepper Potts’s (Gwyneth Paltrow) daughter, Morgan, in a deleted scene fans began theorizing she could follow in her father’s footsteps and take on a role like Iron Lad.

What This Means For the Future of the MCU

While Marvel boss Kevin Feige has not outright confirmed that a Young Avengers show or movie is in development, it seems all but inevitable with so many characters being introduced in the next Phase. Perhaps in the wake of recent reshuffling releases in the MCU slate due to the pandemic, Feige may want to keep future announcements closer to the vest.

Phase 4 is already going to be the most packed of any Marvel phase so far. Rumor projects for Phase 5 have already been circulating online, so it is possible that fans can expect the Young Avengers to show up then, sometime in 2023 or later.

The real question is not if Marvel will bring the Young Avengers characters to the MCU but when and how. Will they get their own feature film or perhaps a television series similar to Netflix’s The Defenders? What we can say for certain is that we definitely have not seen the last of these characters.

Let us know in the comments below if you are excited to see the Young Avengers finally make it big in the Marvel Cinematic Universe!