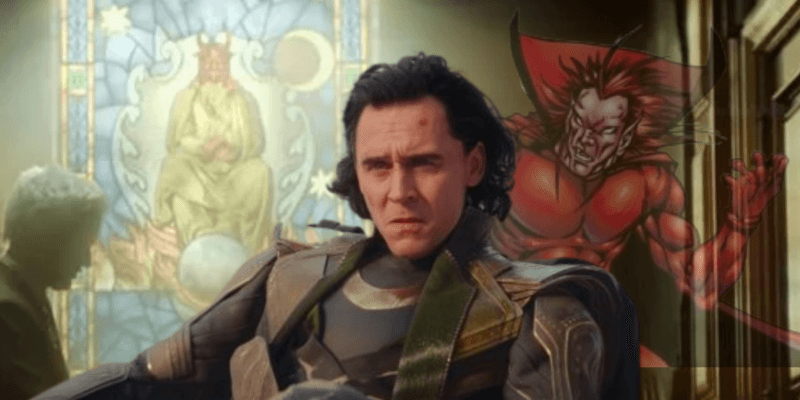 We’ve heard it before – so much so that it ruined the finale of WandaVision for some fans. Yet fans simply give up on their hopes for Marvel’s comic book devil to show up in the MCU’s Phase 4. Now, these conspiracy theorists think they found a reference to him in the Loki trailer.

The Norse God of Mischief will return to the Marvel Cinematic Universe on Wednesday, June 9 and the trickster is sure to get up to no good alongside Owen Wilson’s character Mobius M. Mobius. The official description from Marvel Studios gives fans a taste of what to expect in their latest Disney+ original series:

In Marvel Studios’ “Loki,” the mercurial villain Loki (Tom Hiddleston) resumes his role as the God of Mischief in a new series that takes place after the events of “Avengers: Endgame.” Kate Herron directs and Michael Waldron is head writer

We do not know everything that Loki will get up to on his solo outing, but Marvel fans will get their first look at the Marvel multiverse before Doctor Strange in the Multiverse of Madness (March 25, 2022). Marvel Studio’s boss Kevin Feige confirmed Marvel’s Loki series will have the Frost Giant Prince meeting other variants of himself as he travels through time with the Time Variance Authority (TVA).

With a premise like that then anything is possible with a show like Loki and those fans who felt let down that Marvel’s other trickster never showed up against the Scarlet Witch or Vision in their Disney+ series have reviewed every Loki trailer frame by frame and think they found an Easter Egg referencing Mephisto to see if he could come up against the trickster god.

Or if Loki could find himself in Mephisto’s realm, the Dark Dimension, in his travels between realities. He could even bring back Agents of SHIELD‘s Ghost Rider Robbie Reyes (Gabriel Luna) back in the Marvel Cinematic Universe since he is currently just handing out there as far as we know. In time, he could join up with Oscar Isaac’s Marc Specter/Moon Knight to form the Midnight Sons – their team from Marvel Comics.

The stained-glass window seen above depicts a red-faced, horned demonic figure that is sure to bring any Marvel Comics fan’s mind to Mephisto. Marvel’s version of Satan is sure to debut in the MCU at some point as Marvel Studios runs through villains at a rate of one for every movie, with very few ever returning for a second appearance. Thor’s brother is one of a few exceptions.

The debate has begun and Reddit user Twigryph takes a deep dive into the devil in the window theory to debunk the idea saying that the horned figure is none other than our favorite God of Mischief himself. They suggest that this may be set up to a catalyst caused by Loki that will combine the Norse myth of Ragnarok with the Christian Bible’s Book of Revelation.

Related: Was ‘Loki’ Already Renewed for Second Season on Disney+?

Mephisto may not show up in Loki, but he can never be ruled out. Perhaps he could even show up in Spider-Man: No Way Home (December 17, 2021) since in Marvel Comics he made a deal with Peter Parker to erase his identity from public memories after it was revealed in the Civil War comic book storyline. Tom Holland’s Peter Parker had his name revealed at the end of Spider-Man: Far From Home (2019).

Either way, as fans count down the days till the premiere of Marvel Studios’ Loki on Disney+ the excitement for the next chapter of Marvel’s Phase 4 is reaching its peak after the end of The Falcon and the Winter Soldier. Marvel fans who are demanding the series take them to alternate timelines should be wary of a repeat of the disappointment they felt with the expectation of the multiverse coming in WandaVision failed to come to pass.

The Prince of Asgard that fans are getting in this series will not be the same that was redeemed in Thor: Ragnarok (2018) and then was killed by Thanos (Josh Brolin) in Avengers: Infinity War (2018).

Instead, this is the one who escaped with the Tesseract/ Space Stone in Avengers: Endgame (2109). Marvel Studios is finally giving him a chance to define himself outside his role as the little brother of the God of Thunder, Thor (Chris Hemsworth).

Let us know in the comments below if you think Mephisto will appear in Loki.