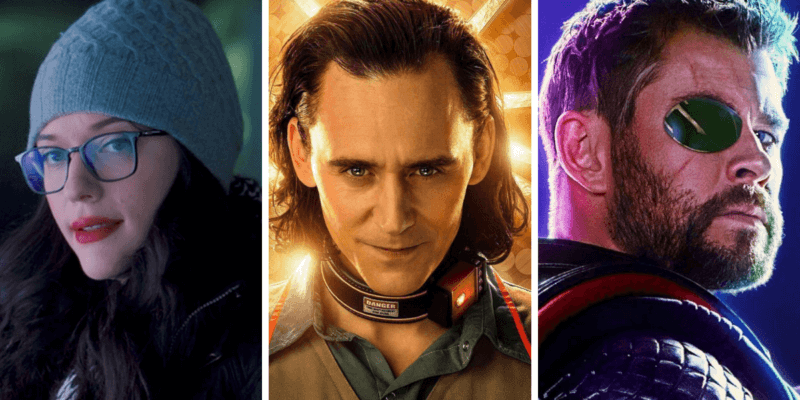 The Loki cast may be expanding as a betting site has put odds on certain MCU characters appearing.

The chances of some are seemingly quite slim. However, others like Natasha Romanoff / Black Widow, are quite high. Let’s break down the statistics and see which character is most likely to join the Loki cast according to the official odds.

Who will join the Loki cast?

According to one betting site, Loki is most likely to be joined by two existing MCU characters and one newbie. Black Widow (Scarlett Johansson), Lady Sif (Jaimie Alexander), and Lady Loki. Black Widow needs no introduction, though some of you may not remember Lady Sif, who was a prominent character in Thor (2011) and Thor: The Dark World (2013). Jaimie Alexander then reprised her role for two episodes of Agents of S.H.I.E.L.D., and the character is set to appear in the upcoming Thor: Love and Thunder (2022), directed by Taika Waititi.

Lady Loki on the other hand is a completely new character. Well, kind of. The character has been around in the comics for several years, and she’s actually an alternate form of the trickster himself. Fan speculation about Lady Loki appearing in the Disney+ series went wild after a set photo leaked. The shot showed Sophia Di Martino wearing a very Loki-esque outfit.

The costumes aren’t just slightly similar. The golden accent. The woven black leather. Sophia Di Martino is in a Loki costume. Whatever that means, (Lady Loki?) we’ll just have to wait and see. Just keep in mind that theories are only theories until we have spoken confirmation. pic.twitter.com/uBmH9zIbqo

However, let’s take a look at the rest of the odds.

The odds at the time of publication were:

How likely are these characters to join Loki?

The beauty of Loki is that it features time travel, so anything goes. Additionally, if the series also introduces the multiverse that’s only truer. However, some characters are definitely more likely to appear than others. For example, both Nick Fury (Samuel L. Jackson) and the Hulk (Mark Ruffalo) seem more unlikely, as reflected in the odds. A $10 bet on Fury or Bruce Banner appearing, for example, would net the bettor $200.

Strangely, however, the odds put Thor (Chris Hemsworth) as one of the least likely bets. If there is any character in the Marvel Cinematic Universe that is tied to Loki, it’s Thor. In fact, Tom Hiddleston has yet to appear in the MCU without Hemsworth by his side. We think it would be pretty wild for Thor not to turn up, even as a cameo. However, the “smart guys” usually know what they’re talking about.

But, we all know how theory-mongering got out of hand with WandaVision, so we’ll leave it there for now. Speaking of WandaVision, Darcy Lewis seems like a pretty solid bet. Kat Dennings has portrayed the role in the first two Thor films, so she’s certainly up to speed with who Loki is. Plus, having just starred in WandaVision, and with fans clamoring for more Darcy, we know the fandom would be thrilled to see her turn up again.

How would these characters join the cast of Loki?

Loki is set to travel through time and possibly the multiverse in his first solo adventure. After stealing the Tesseract in Avengers: Endgame, the God of Tricks is forced to work with the Time Variance Agency and fix the timelines that he’s broken. In particular, he’ll be working with Mobius M Mobius, played by Owen Wilson. We also know that Richard E Grant, Sasha Lane, and Sophia Di Martino will star alongside Tom Hiddleston.

As the series is all about time travel, there are ample opportunities for the aforementioned characters to turn up. While we don’t know where the series will take him, a return to Asgard is possible for Hiddleston’s Loki. If the multiverse is introduced we may also see new, alternate versions of the iconic character, such as Kid Loki and the aforementioned Lady Loki. Furthermore, this gives Kevin Feige and company the opportunity to revisit past MCU movies and feature cameos from fan favorites like Vision (Paul Bettany) and new Thor Jane Foster (Natalie Portman).

Remember, this isn’t the same Loki from the core MCU timeline, however. This Loki is the one from the split timeline in Avengers: Endgame who stole the Tesseract that Captain America and company were trying to retrieve. The Loki of “our universe” was murdered by Thanos in Infinity War and remains dead. Though presumably he’s still being played by Matt Damon.

Of course, Doctor Strange is always a good bet, particularly if this series goes beyond alternate timelines and delves into the multiverse.

The Loki cast is certainly growing. However, despite it dipping into the MCU’s past, there are some characters that aren’t likely to return. He may have a long history with Loki, but Chris Evans is probably not going to turn up as Captain America. Equally, it seems pretty unlikely that Captain Marvel (Brie Larson) or any of the characters from Black Panther will turn up, as they have no history with the lovable villain.

However, the fact that Black Widow is a good bet is very interesting. As we all know, Scarlet Johansson’s Natasha Romanoff dies in Avengers: Endgame, though she will appear in Black Widow (2021), later this year. Could Loki tie into this movie? We already know that Julia Louis-Dreyfus was meant to appear as Contessa Valentina Allegra de Fontaine (or Val, in your head) in Black Widow. Now that we’ve seen her try to recruit John Walker in The Falcon and the Winter Soldier, there has been speculation that she’ll be behind the Thunderbolts, as a kind of reverse Nick Fury. With that in mind, Loki certainly seems like a prime candidate to join a team of baddies! Perhaps this character is behind Nat’s appearance in Loki.

Loki premiers on June 11th and stars Tom Hiddleston and Owen Wilson. It is a Disney+ exclusive.

Would you want any of these characters in the Loki cast? Let us know in the comments below.