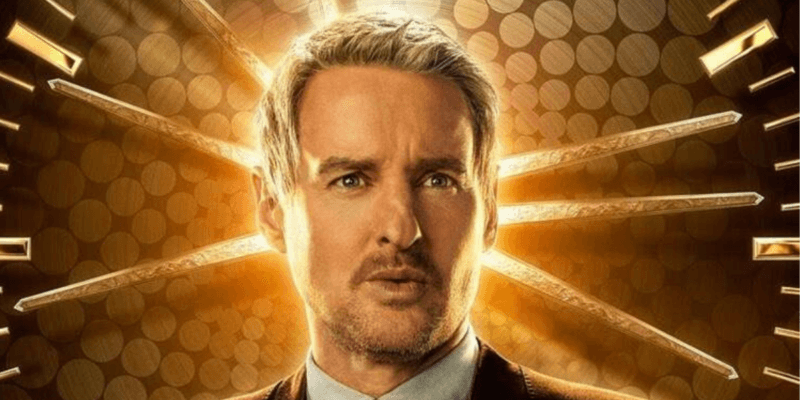 Loki premiered on Disney+ Wednesday, June 9, 2021. It is the third original series that Marvel has produced for Disney+, following the wild success of WandaVision and The Falcon and The Winter Soldier.

Marvel fans are beyond excited about the latest Marvel show and all the chaos this version of Loki will unleash in the Marvel Universe. It’s expected to be one of the most-watched series on Disney+ and Marvel Studios is already looking at expanding it in further seasons.

The series is set to follow the trickster on an escapade through time and reality after he finds himself employed by Marvel’s Time Variance Authority (TVA). We know from the trailers that Loki is recruited by Owen Wilson’s character, Mobius M. Mobius, but you may be asking yourself who Mobius is.

So, here is a complete guide to everything you need to know about Mobius M. Mobius before you catch Loki on Disney+.

Who is Mobius M. Mobius in the MCU?

Mobius will be pulling a lot from his comic book origins. As a high-ranking member of the TVA, he will be serving as Loki’s handler as the duo track down other variants – people who find themselves out of their own time. The events of Avengers: Endgame (2019) seemed to have had a domino effect on the Marvel multiverse – creating branch realities and variants like Loki who are not supposed to exist anymore.

The Time Variance Authority is a government agency in the Marvel Universe that is responsible for keeping timelines separate and reality flowing in the correct direction. In Marvel Comics as new realities pop-up the TVA expanded to become an unceasing bureaucracy that exists in its own temporal dimension.

Owen Wilson’s Mobius character works for this organization as a mid-level agent, going into the field with Loki to track other variants. In the Loki trailer, we first see Agent Mobius sitting in the back of the courtroom scene as Loki is judged for his crimes.

He looks eager to recruit the God of Mischief for his “unique Loki perspective,” to help save undo the damage done by Loki escaping from his fate in Avengers (2012). Those events eventually led to Loki’s redemption then death in Endgame.

Agent Mobius himself points that the chaos that the Timekeepers are dealing with is a result of Loki “picking up the Tesseract and breaking reality.” Marvel fans will remember the Tesseract held the Space Stone and Loki used to teleport into an alternate time.

They exchange a few quips before eventually, Loki agrees to help Mobius, clearly for his own gain as he later admits in narration that “It’s adorable that you think you could possibly manipulate me. I am ten steps ahead of you.”

However, fans wonder if Loki should be feeling as confident as he does in the Loki trailer. It could be that Agent Mobius is in fact using Loki for his own reasons beyond trying to set the Marvel timeline back in order.

Though as episodes of the Loki series have aired more has been revealed about Agent Mobius. Including the fact that he and every other Agent, Hunter, and Minute-man are actually all variants that have been abducted and brainwashed by the Timekeepers.

In the best episode of Loki, episode 4 “The Nexus Event”. Mobius learns the truth and fans are left wondering if he ever had his own jet ski. Before he can help the God of Mischief rescue Sylvie (Sophia Di Martina) his friend Judge Ravonna Renslayer pruned him.

Whether or not he is actually dead remains to be seen after the shocking post-credit scene. But if Owen Wilson’s character Mobius is brought back it does seem they will probably fail to set these realities back as more multiverse shenanigans will continue in Spider-Man: No Way Home (December 17, 2021) and Doctor Strange in the Multiverse of Madness (March 25, 2022). And the key to Mobius’s motives might lie in his Marvel Comics origin.

Agent Mobius first appeared in “Fantastic Four #353″ in 1991 created by Walter Simonson. His character design was based on another Marvel writer, Mark Gruenwald, notable for his work on Captain America and creating the character of U.S. Agent/ John Walker (played by Wyatt Russell on The Falcon and The Winter Soldier). Gruenwald was an Editor-in-Chief for Marvel as well as the continuity expert. His job was to keep the Marvel Comics timeline in order.

Mobius gets his name from the Möbius strip, a mathematical shape made by taking a strip of paper, giving it an odd number of half-twists, and bringing the ends together in a loop. An inverted Möbius strip was used to represent time-travel in Avengers: Endgame.

In his first appearance, Agent Mobius was a junior manager in the TVA. After The Fantastic Four are brought to the TVA to go on trial for manipulating the timeline, they meet Mobius who takes them on a tour of the Null-Time Zone, the TVA’s temporal dimension.

It’s very similar to how we see Mobius walk Loki through the TVA in the trailers. He is not trying to recruit Stan Lee’s first family of superheroes. He is trying to warn them that if they continue to travel through time it could lead to the destruction of the world.

He offers Ben Stone/The Thing a chance to avoid ever becoming The Thing, and essentially preventing The Fantastic Four from ever existing. However, when Ben realizes that without The Fantastic Four, Galactus would have destroyed the Earth – a fact that Agent Mobius does not seem particularly worried about.

Throughout his various appearance in Marvel Comics, Agent Mobius slowly works his way up to become senior management and eventually a judge. He is known for paying particular attention to detail and using Marvel superheroes like the Avengers to rise up the ranks of the TVA.

He eventually sits on the famous trial of She-Hulk after she tries to change history to save Hawkeye/Clint Barton’s life. Mobius eventually spares Jennifer Walters for her crimes and releases her, although he does not allow her to save Hawkeye and She-Hulk has to go on a mission for the TVA to redeem herself.

In Marvel Comics, Agent Mobius is portrayed as a colder and more calculating character. Not a villain but not a hero. Distinctly different from the wise-cracking version we seem to be getting in the Loki TV show. However, he might not be a friendly as he seems.

Perhaps he is using Loki to work his way up the bureaucratic ladder of the TVA. His handling of both The Fantastic Four and She-Hulk both led to promotions. The TVA has a very strict corporate structure in comic books.

On the lowest rung are the robotic drones called Minutemen. These are the armored people going on missions with Loki and Mobius throughout the Loki series. Then in middle management, there are characters like Mobius, who are all clones of the same person who are created each time a new reality comes into existence. Mobius sets himself apart from the rest of the clones through his interactions with other Marvel heroes. This allowed him to rise to upper management and become a judge.

Who plays Mobius M. Mobius in the Marvel Cinematic Universe?

When Owen Wilson was announced back in January 2020, fans thought it was a wild choice. Wilson’s typical quirky performances suggest that Marvel Studios are taking the Morbius character in a different direction from his Marvel Comics origin. Wilson will be bringing his comedy chops from some of his more mature content like Zoolander, Shanghai Noon, and Royal Tenenbaums to the MCU.

But, fans were quick to fall in love with Owen Wilson’s gray hair and mustachioed look for Loki. The overall response has been kind. Curtis Kimberlin Jr. said it best on Twitter with:

“Owen Wilson with grey hair and a mustache is in the MCU and I love that for us!”

Owen Wilson with grey hair and a mustache is in the MCU and I love that for us! #Loki pic.twitter.com/FceK3twm6D

Related: Everything Coming to Disney+ in July 2021

Owen Wilson and Hiddleston also have a history together, as the duo performed together in Midnight in Paris (2011). And in 2013 on Popcorn Taxi Tom Hiddleston’s impersonation of Owen Wilson as Loki went viral. Actor Owen Wilson is coming to the Loki series off the box office success of his role in Mike Cahill’s Bliss alongside Salma Hayek.

In an interview with The Jess Cagle Show, Actor Owen Wilson admitted that he didn’t rely on reading the comics in order to prepare for his role in the Marvel show. Instead, he admits that Hiddleston took the time to help catch Owen Wilson up on the history of the MCU saying:

“They were almost like the Loki lectures. And so he, for a couple days walked me through everything and the whole lore […] he showed me clips from the other movies and how it all fed into this story.”

Owen Wilson will take his new comic book movie cred to Paramount Pictures’ Secret Headquarters, which is about a young boy finding a superhero base under his house and will explore some of the superhero psychology behind these types of characters. But for now, viewers can expect an amazing performance by Owen Wilson as Mobius.

What Mobius M. Mobius does at the Time Variance Authority

As previously mentioned, the Time Variance Authority tries to keep each alternate timeline and reality separate. The TVA sends drones like the minutemen out to round up variants like Loki and bring them to Null-Time Zone for trial and potentially imprisonment. Though in the clip “Agent Mobius” released in promotion during the MTV Awards Loki says that the timekeepers that run the TVA are “space lizards” and “ridiculous.”

The Loki TV series seems to have expanded some roles within the TVA. Since in Marvel Comics all the human Timekeepers are cloned from the same person, we already know that will not be true in Loki. We see other workers in the Loki trailer who are clearly not clones of Mobius, including the one assigned to review every word the Lord of Lies ever said.

And Gugu Mbatha-Raw will be playing Judge Renslayer. Her character is most likely Ravonna Renslayer/ Terminatrix, the time-traveling lover of Kang the Conqueror, who is set to appear in Ant-Man and the Wasp Quantumania (February 17, 2023). Kang Conqueror is a frequent opponent on the TVA in the comics.

So, Mobius appears to a mid-level agent within the Time Variance Authority and will act as Loki’s handler throughout the Marvel show. It is not known if there are other variants that work for the TVA or if Loki is the first to be recruited. It could be a new level in the TVA created by Mobius to try to get a promotion.

Not only that, but it’s clear that he and Loki will go into the field together but at some point, Loki will fall back on bad habits and betray Mobius. This will cause the timeline to unravel further and lead directly into the event of Doctor Strange in the Multiverse of Madness.

Let us know in the comments below if you want to see more of Owen Wilson’s character Mobius M. Mobius in the future of the Marvel Cinematic Universe.

Comments Off on Who Is Mobius M. Mobius In ‘Loki’?