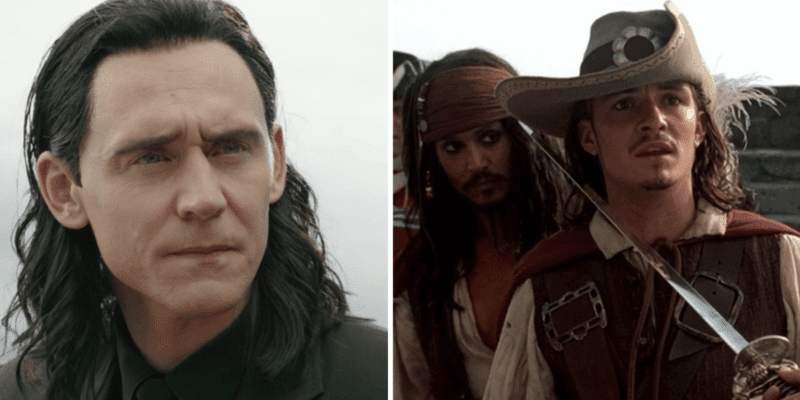 It’s hard to imagine anyone else playing the Pirates of the Caribbean characters — especially Johnny Depp’s iconic Jack Sparrow — and yet, very early on in the casting stages, another actor auditioned for a role in the first movie…to play Will Turner.

Back then, the actor was a relative unknown, but now most will know him as one of the leading men in The Walt Disney Company’s other blockbuster franchise — the Marvel Cinematic Universe.

Who almost played Will Turner?

One of the biggest franchises in Disney’s catalog — albeit before buying Marvel Entertainment in 2009 and Lucasfilm in 2012 — was Pirates of the Caribbean.

The swashbuckling movies began in 2003 with Pirates of the Caribbean: The Curse of the Black Pearl and spawned famous characters like Depp’s roguish pirate Jack Sparrow, Kiera Knightley’s Elizabeth Swann, and Orlando Bloom’s Will Turner.

One actor who auditioned for the part of Will Turner in the very early stages of his career, was Loki actor, Tom Hiddleston.

Hiddleston — who has played the Marvel fan-favorite anti-hero since 2011 — took part in an audition for the Jerry Bruckheimer and Disney produced, Pirates of the Caribbean. Speaking circa 2013 about his role in the Shakespeare feature-length documentary, Muse of Fire (2013), Hiddleston was asked whether he’d had any terrible auditions since leaving the Royal Academy of Dramatic Art drama school in London.

The Loki actor revealed one of his worst ever auditions was for Pirates of the Caribbean. Hiddleston explained how he received the partial script the night before the audition after his agent called him to disclose the information about what he was auditioning for. The only downside to receiving this news was that Hiddleston was just about to go out drinking to celebrate his friend finishing his exams. He said:

“…my agent called: “You’ve got this audition tomorrow, ten o’clock.” And it was five in the evening, and I was like “Ah man, what’s it for?” and he went “It’s this Disney film, it’s a big American franchise, it’s about ships and storms and stuff…and you’re playing the lead.”

The Marvel star, who is based in London, went on to add that he asked about who was producing the “Disney film”, but at the time didn’t really understand the scale of things within the movie industry. Hiddleston goes on to say that he “spent a few hours” looking at the script, and then went out to meet his friends. He later revealed how the audition went:

“The next day I walked in at ten o’clock, very hungover, hadn’t learnt it and did it […] we did it a couple of times and [the casting director] was like “uh huh, okay, okay, well thanks for coming in…”

Hiddleston — who has since gone on to star in movies like Kong: Skull Island (2017) and Early Man (2018), and the television drama The Night Manager (2016) — said the casting director seemed less than pleased.

“She said, “why haven’t you learnt it? Why didn’t you learn it? I mean this is going to be huge.”

In the interview, Hiddleston said his excuse at the time was that he had only received the script the night before, before quickly adding — “which I’ve since learnt is no excuse.”

He states that the casting director offered him words of advice, telling him to “learn it next time” and “make a bit of an effort”, before revealing in the interview that the movie he was auditioning for was Pirates of the Caribbean. Hiddleston reflected on this misfire and said:

“Okay! Well, that was something that could have happened that didn’t happen [but] you’ve got to learn some way or another.”

It’s hard to imagine anyone else but Orlando Bloom playing the blacksmith apprentice, Will Turner, but Hiddleston would definitely have proved a worthy choice if his audition had gone slightly better. However, if he had gone on to star in Pirates, we may never have gotten him as the quintessential shapeshifter, Loki, in the Marvel Cinematic Universe.

What’s next for Tom Hiddleston?

The actor has amassed legions of fans during his decade-long tenure as the God of Mischief. Appearing in all three Thor movies with Chris Hemsworth (Thor), as well as three of the four Avengers crossover blockbusters including Avengers: Infinity War (2018), the Asgardian trickster will appear next in his self-titled Disney+ show, Loki.

The MCU show might also introduce Lady Loki into the franchise if these reports are anything to go by. Hiddleston’s Loki is also rumored to appear in the Doctor Strange (2016) Marvel movie sequel, Doctor Strange in the Multiverse of Madness (2022), alongside Benedict Cumberbatch (Stephen Strange) and Elizabeth Olsen (Wanda Maximoff / Scarlet Witch).

After five box-office wins, the Pirates franchise is set to release the sixth installment with a Margot Robbie spin-off in the works also. Due to the ongoing legal battle with his ex-wife Amber Heard, and a court ruling rejecting his appeal to dispute the claims made against him, Johnny Depp will most likely be out of any upcoming Pirates of the Caribbean movies. He also resigned from the role of Gellert Grindelwald in the Warner Bros Fantastic Beasts franchise following the court case ruling in November 2020, after the studio asked him to do so.

Do you think Tom Hiddleston would have made a good Will Turner?