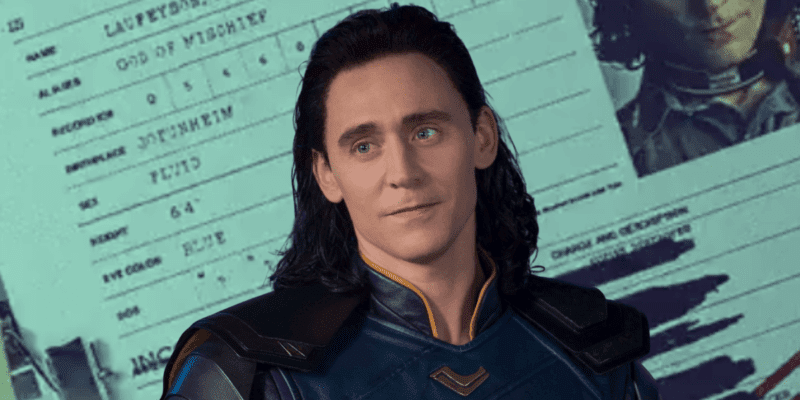 We are in the final stretch before Loki premiers on Disney+ Wednesday, June 9, 2021. The reviews are already coming in and critics and fans are in love. The latest promo had a surprise in store for Marvel fans and confirmed that Tom Hiddleston’s Loki is officially gender-fluid just like his comic book counterpart.

Marvel’s latest Disney+ original series will build on the success of WandaVision and The Falcon and the Winter Soldier and will star Tom Hiddleston as the God of Mischief, Loki, after his escape during Avengers: Endgame (2019). This Loki is a variant offshoot from the events in The Avengers (2012) and not the one that Thanos (Josh Brolin) killed.

The mercurial trickster will bring chaos to Marvel’s sacred timeline as he should have died back in Avengers: Infinity War (2018). From there he will be recruited by Owen Wilson’s character Mobius M. Mobius to help fix the timeline as new variants emerge. Variants that Kevin Feige already hinted to fans will show up in the new Marvel TV show.

Now, in the latest promo released on the official Loki Twitter Page, Marvel Studios shows fans the file that the Time Variance Authority (TVA) has on the trickster god.

As fans pause to read through it, there are many details like Loki’s height, weight, and hair color. But next to gender Marvel has put “fluid”. This is pulled directly from Loki’s character in the comic books.

For a while in Marvel Comics Loki was a woman named Lady Loki after he took over the body that was meant for Lady Sif after Ragnarok. This was first hinted at in the Marvel Cinematic Universe in Thor: The Dark World (2013) when the quintessential shapeshifter briefly appeared as Lady Sif (Jaimie Alexander) before changing into Captain America aka Steve Rogers (Chris Evans).

A female variant of Loki called Sylvie played by Sophia Di Martina has appeared in the Loki series and so has Kid Loki (Jack Veal), who is also a potential Young Avenger like Wanda’s sons Tommy and Billy who are set to return in Doctor Strange in the Multiverse of Madness (March 25, 2022).

Loki was confirmed as both gender-fluid and bisexual in 2014’s Loki: Agent of Asgard, written by Al Ewing. Loki calls himself both the God of Stories and the Goddess of Stories. He had dropped the God of Mischief after his turn to the more heroic side of Marvel Comics.

And now the show has also confirmed that Loki is bisexual.

Even his father, Odin, is aware of his son’s gender identity, as he refers to Thor, Loki, and their sister Angela (Hela is not their sister in Marvel Comics) as “my son, and my daughter and my child who is both.” In Thor & Loki: The Tenth Realm #5 as part of the Original Sin event.

Related: Loki Takes Over Twitter to Reveal Coded Messages – Is It All a Trick?

The Loki series already seems to pull a lot from the variant of the trickster that was in Marvel Comics around 2014. Ironically, Loki had been redesigned to more like Tom Hiddleston’s portrayal as Marvel fans loved it so much. There have been references to the Vote Loki series from 2016 that overlapped with the Frost Giant Prince’s time as the Agent of Asgard.

Loki’s gender-fluidity is even in line with Norse mythology, from which the Thor franchise pulls heavy inspiration. The trickster was depicted mostly as male but sometimes as female — and even according to viking legend gave birth to an eight-legged horse seen in a mosaic on Asgard in Thor: Ragnarok (2018). Loki’s ability to shapeshift allows him to defy expectations. And, it will be essential in his travels through historical events of the Marvel Multiverse.

It’s good to see that Marvel Studios continues to make diversity an important part of the MCU’s Phase 4 by including more characters of color like Kamala Khan aka Ms. Marvel and Miss America Chavez. As well as though with disabilities like Maya Lopez (AKA Echo), who will be deaf in the upcoming Hawkeye series.

What Does Gender Fluid Mean?

For those who might not fully understand what it means to be gender fluid the Harvard Medical School explains it like this:

Gender fluid is different from transgender where an individual’s gender identity does not match the gender they were assigned at birth. They may decide to transition to their gender identity through surgery or hormone treatments. But someone who identifies as gender fluid may identity as more feminine one day, male another. Some may feel as though they fit someone in the middle – neither gender, which is known as non-binary.

The villain may use his shape-shifting ability to more accurately reflect his gender identity by appearing as either a woman or as a man throughout the show. Another hint that Lady Loki will appear. The Norse God will show Marvel fans that his more than Thor’s evil little brother (or sister, depending on the day).

Let us know in the comments below if you are excited to see Loki this week! Are you already pumped for a potential second season?