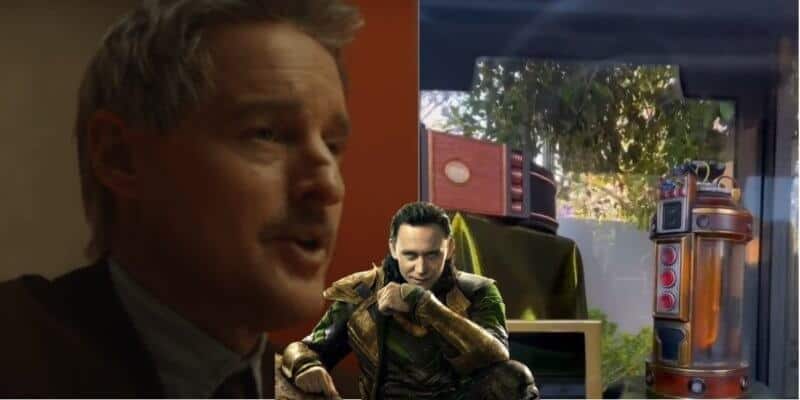 It was a Marvel-filled day at Disneyland Resort on Friday, as hundreds of Disney and Marvel fans were lined up to experience Avengers Campus for opening day at Disney California Adventure.

This weekend was an overload of MCU excitement as Guests were finally able to possess Spider-Man’s powers inside the highly anticipated attraction WEB SLINGERS: A Spider-Man Adventure and enjoy delicious chicken and plant-based falafel wraps at Shawarma Palace.

As you immerse yourself in this new Marvel land, keep your eyes peeled, Loki fans! It looks as though the Collector has stolen some very important items from the Time Variance Authority and has stored them away in Avengers Campus.

As we prepare for the Disney+ premiere of Loki on June 9, many Guests who visit Avengers Campus can get a sneak peek of some interstellar devices that the Time Variance Authority uses to “protect the sacred timeline”. But how did The Collector possess these secret weapons from the TVA?

We can only suspect that these otherworldly items were most likely given to the Collector from Loki, as many Guests have seen him lurking around Avengers Campus in Disney California Adventure this weekend. Where can you examine this first hand? Check out the location as Disney Parks shares:

Hmmm, looks like we gotta stream Loki next week, June 9 on #DisneyPlus to find out ? #Loki #AvengersCampus #Disneyland #Avengers

Hmmm, looks like we gotta stream Loki next week, June 9 on #DisneyPlus to find out ? #Loki #AvengersCampus #Disneyland #Avengers

We are most likely to learn how these relics work in the newest Marvel series on Disney+ as he teams up with Agent Morbius, and the Time Variance Authority (TVA).

Want to see more behind the scene looks before Loki airs? Check out Twitter fans thank Marvel and director Kate Herron for a shirtless Tom Hiddleston.

Are you excited for Loki on Disney+? Have you seen these TVA items inside Avengers Campus? Let us know in the comments below!

Want to experience Avengers Campus? Our friends at Academy Travel can help and EarMarked Diamond!

Comments Off on Loki and the TVA Tease Guests Inside Avengers Campus!