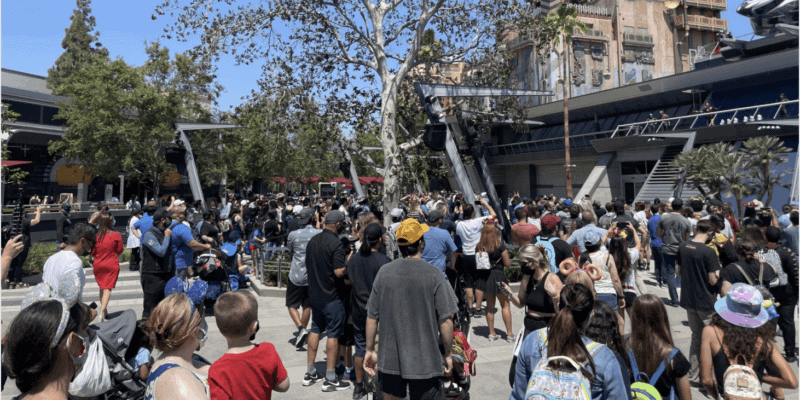 Disney’s first Marvel-themed land was originally slated to open on July 18, 2020, but due to Disneyland’s year-long pandemic-related closure, the date was pushed back to June 4, 2021.

Today, we have an inside look at crowd levels inside of the brand new area at Disney California Adventure Park and, as expected, Disney Park-goers have flocked to see Spider-Man, Iron Man, Black Panther, Captain Marvel, Doctor Strange, and more at this immersive new land.

It’s worth noting that the highly anticipated ride, WEB SLINGERS: A Spider-Man Adventure, is using a virtual queue system similar to the boarding groups used for Star Wars: Rise of the Resistance at Star Wars: Galaxy’s Edge, but crowds surrounding the ride and WEB Suppliers were thick, with fans waiting for quite some time to get a glimpse of all of the exciting merchandise — including Spider Bots and exclusive Funko POPs — that Avengers Campus has to offer.

Related: Here Are Some Must-Eats at Avengers Campus

Fans were also excited for all of the new photo ops at Disney California Adventure’s new Marvel land. The trippy new Doctor Strange-esque photo spot has been a particular hit — even Disneyland Resort President Ken Potrock has gotten in on the fun!

Please note that a standby queue is being used for those who wish to enter Avengers Campus when it reaches capacity. Crowds of people waiting to get into the new Disney theme park expansion were among the most shocking today, as the standby line reached nearly all the way through Disney California Adventure Park!

As you can see from the photos below, Guests were waiting all the way down Buena Vista Street by Carthay Circle Restaurant and through the area across from Pixar Pier just to get a chance to experience the Campus on its opening day.

Remember that at this time, Disneyland Resort is requiring Guests to have both a valid theme park ticket and a park reservation for Disney California Adventure in order to visit Avengers Campus. You can visit the official Disneyland website for the latest ticket details and health and safety information at Disneyland’s two theme parks and the Downtown Disney District.

Were you lucky enough to visit Avengers Campus on opening day?

Let the expert team at Academy Travel help you plan your next magical Disney Parks vacation to Disneyland Resort in Anaheim, California or Walt Disney World Resort in Orlando, Florida!