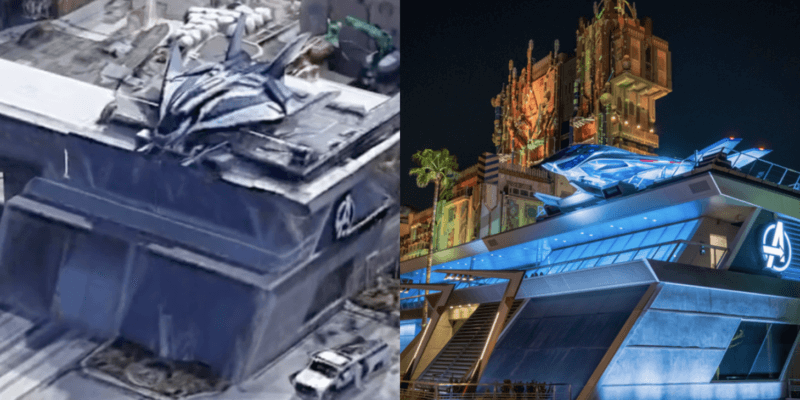 Disneyland Resort fans have been anxiously awaiting the opening of the new Avengers Campus land at Disney California Adventure Park since its original opening date — July 18, 2020 — was announced.

The COVID-19 pandemic, and Disneyland Resort’s prolonged closure, threw a wrench into Disney’s plans, however, and the new Marvel-themed land will now be opening its gates to Guests for the first time on June 4, 2021.

With Avengers Campus appearing only as a bunch of trees on the Disneyland App map [prior to the recent update], we would often check GOOGLE to see if they would “leak” the layout of the new Avengers Campus…and we just saw that their map was FINALLY updated to show the new land’s layout!
•
We finally have a rough idea of where everything is situated! There appears to be three entrances to the new land (swipe to see where). The map includes the locations of where everything is located relative to the entrances. Mind you, Google’s satellite images only go so far as far as detail, but it’s enough to show where things are!
•
We’re so excited! We can sort of pre-plan the visit!
•
? Avengers Theme by Alan Silvestri
•
Screen records/screenshots from Disneyland app and Google.

In this aerial look at Avengers Campus, Marvel fans can clearly see structures like the WEB Suppliers retail store (which will be fully stocked with Avengers Campus merchandise), the Shawarma Palace food cart, the Ancient Sanctum, and highly anticipated ride, WEB SLINGERS: A Spider-Man Adventure.

Disney recently revealed that Guests at Avengers Campus will be able to customize their WEB SLINGERS attraction experience with special power bands that give them “real” superpowers — get ready to feel just like Tom Holland!

Walt Disney Imagineering has clearly outdone themselves with this new Avengers headquarters and we can’t wait to experience the land for ourselves.

Team up with Super Heroes like Spider-Man and Black Panther at Avengers Campus at Disney California Adventure Park in Southern California—opening June 4, 2021.

For the latest Disneyland Resort and Downtown Disney District health and safety information during the Resort’s phased reopening process, visit the Disneyland website.

Are you looking forward to visiting Avengers Campus and feeling like a Marvel superhero this summer?

Avengers, Assemble! Let the expert team at Academy Travel help you plan an out-of-this-world Disney Park vacation to either Disneyland Park or Disney California Adventure. They will make sure you know how to navigate Disneyland’s new reservation system and find the perfect accommodations for you and your family.

Comments Off on Fly Above Avengers Campus Like Captain Marvel