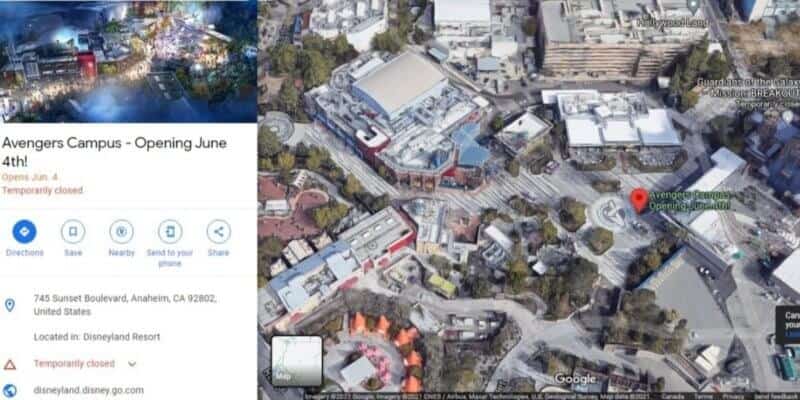 Disney Parks fans are counting down the days until they can enter the Disneyland Resort Parks — Disneyland Park and Disney California Adventure — to once again experience the magic they’ve been missing for nearly a year.

For those of us who want a sneak peek before Disneyland Resort officially reopens — to California residents only right now — Google Maps has updated their images of both theme parks and, let me tell you, it looks amazing!

Disneyland Resort has gone under major renovations! On April 30, Disneyland and California Adventure Parks will fully reopen their gates to Disney fans! During its pandemic-related closure, Disneyland has updated certain attractions, such as Snow White’s Enchanted Wish and The Little Mermaid – Ariel’s Undersea Adventure.

Google Maps has completely updated Disneyland Resort and showcases what Disneyland and California Adventure look like today. As far as Avengers Campus coming June 4, we can clearly see how the entire layout will immerse Disney Guests into feeling like they are part of the MCU! The views of the massive Avengers symbol in the middle of the land, along with an aerial look of the Pym Test Kitchen restaurant make me want to scream in excitement.

The Little Mermaid – Ariel’s Undersea Adventure is almost ready to go with a newly brightened facade. As you can see, the right side scaffolding looks like it is still under construction, but we have confirmed in a recent post that it is fully painted and upgraded for Guests on April 30.

Views of Pixar Pier in 3D look unbelievable! Everything on the Pier is updated to the fullest, with Inside Out Emotional Whirlwind and Pixar-Pal-Around ready to ride soon. Brightly colored Lamplight Lounge matches Incredicoaster’s red theme and Jessie’s Critter Carousel looks ready for Guests of all ages to enjoy in just a few short days!

For those who are huge Star Wars fans, check out the entire landscape of Galaxy’s Edge in 3D on Google Maps! The Millennium Falcon is the cherry on top of surrounding shops in the market and Star Wars-themed restaurants such as Docking Bay 7 Food and Cargo.

If you’re interested in looking closer at these two parks, check out the entire Disneyland Resort on Google Maps! Furthermore, make sure you use the satellite option and if you wish, the 3D versions give you all the Disneyland Resort feels.

Did you notice any new changes on Google Maps that we didn’t report? Let us know in the comments below!

Are you planning a Disneyland trip soon? Our friends at Academy Travel are EarMarked Diamond! Want to know more, click the link for more information.