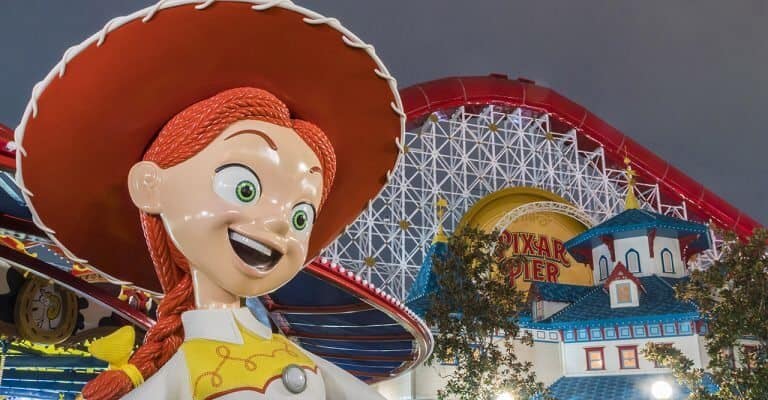 Howdy, Pixar pals! Disneyland Resort fans and annual passholders have been itching to find out when all of the attractions on the all-new Pixar Pier will be completed, and now the wait is finally coming to an end. Disney just announced that Jessie’s Critter Carousel will be opening this April at Pixar Pier in Disney California Adventure. We can’t wait for this rootin’, tootin’ good time!

Jessie’s Critter Carousel is a re-themed version of an attraction formerly known as King Triton’s Carousel of the Sea, which was located on Paradise Pier. Ever since Disney announced the reimagining of Paradise Pier into Pixar Pier, fans of the theme park have been longing to experience all of the attractions coming to the new area. Pixar Pier has been a huge success since it opened in summer 2018 during Pixar Fest at Disneyland Resort, but much of the newly reimagined land has felt incomplete. The new Jessie’s Critter Carousel attraction, along with the Inside Out Emotional Whirlwind attraction also opening later this year, will surely add to the immersive atmosphere and feel-good environment that Pixar Pier has to offer.

Starting in 2019, mosey on over to a classic carousel starring Jessie the Yodeling Cowgirl. Hop aboard a sweet woodland creature inspired by the vintage television show Woody’s Roundup from Toy Story 2 for a rootin’, tootin’ romp that’ll have you yelling “giddyup!”

You can take a look at the attraction’s official page on the Disneyland Resort website here.

Are you excited for Jessie’s Critter Carousel to finally open on Pixar Pier? Share your thoughts with us!